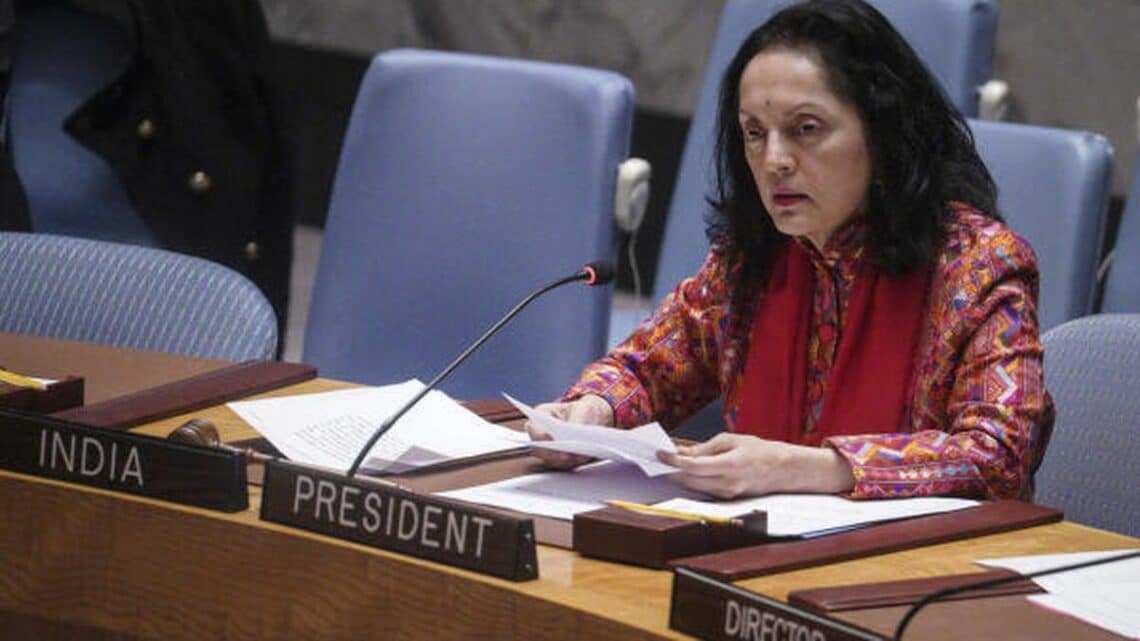 
The era of classifying terrorists as “bad” or “good” on the basis of “political convenience” must end immediately, a concept note circulated by India in the U.N. Security Council here has said, underlining that categorising terror acts by intent as religious or ideologically motivated will dilute the shared global commitment to fighting terrorism.

India, the current President of the 15-nation U.N. Security Council, will hold two signature events on reformed multilateralism and counter-terrorism to be chaired by External Affairs Minister S. Jaishankar on December 14 and 15.

India proposes to organise a briefing of the Security Council on December 15 on ‘Global counter-terrorism approach – principles and the way forward” under the ‘Threats to international peace and security caused by terrorist acts’.

Ahead of the meeting, India’s Permanent Representative to the United Nations Ambassador Ruchira Kamboj, in a letter to Secretary-General Antonio Guterres, asked that a concept note intended to guide the discussions on the topic be circulated as a document of the Security Council.

“The terrorist attacks in New York on September 11, 2001 were a turning point in the global approach to counter-terrorism. Since then, London, Mumbai, Paris, many parts of West Asia and Africa have also experienced terrorist attacks,” the concept note last week said.

It added that these attacks highlight that the threat of terrorism is grave and universal and that terrorism in one part of the world seriously impacts peace and security in other parts of the globe.

“The threat of terrorism is transnational. Terrorist actors and their supporters, facilitators and financiers collaborate while remaining in different jurisdictions to organise acts anywhere in the world. A transnational threat can be defeated only by the collective efforts of all States Members of the United Nations,” it said.

Stressing that the menace of terrorism cannot be associated with any religion, nationality, civilisation or ethnic group, the note said that all acts of terrorism are criminal.

“Terrorism in all its forms and manifestations must be condemned. There cannot be an exception or justification for any act of terrorism, regardless of its motivation and wherever, whenever and by whomsoever committed. The era of classifying terrorists as “bad”, “not so bad” or “good” on the basis of political convenience must end immediately.”

It said that existing and emerging threats call for a renewed collective approach to terrorism.

“Looking at the motivations behind terrorist acts and categorising such acts by intent as political or religious and by ideological motivation will dilute our shared commitment to fighting terrorism,” it said.

The concept note voices concern that in recent times, there has been a resurgence of terrorist activities in both range and diversity, as well as in geographical space.

“The threat posed by the Islamic State in Iraq and the Levant-Khorasan, Al-Qaida, Al-Qaida in the Indian Subcontinent and terrorist groups sheltering in Afghanistan has increased following the takeover of Kabul by the Taliban in August 2021,” the note said.

It added that the collective expectation of the Security Council, expressed in its resolution 2593 (2021) that was adopted under India’s August 2021 presidency of the Council, was that Afghan soil would not be used for terrorism, to threaten or attack any country, to shelter or train terrorists or to plan or finance terrorist acts.

It however noted that “the threat prospects remain high.” Further, Africa’s home-grown terrorist groups have found ideological support from global terrorist groups such as Al-Qaida and ISIL.

“The terrorist threat was further complicated by pirates and organised criminal networks facilitating trafficking in arms, drugs, humans and finance for these terrorist groups. The threat continues to grow towards the coastal region of Western Africa.”

The concept note said that proliferation of digitalisation, new and emerging communications and financing technologies has also increased the risk of these technologies being used by terrorist groups.

The risk of radicalisation through the Internet and social media, and terror financing using cryptocurrencies and crowdfunding platforms, was heightened, particularly during the coronavirus disease (COVID-19) pandemic.

Member states have, in recent times, also witnessed the use of unmanned aerial systems for the surveillance of targets, trafficking in drugs and arms and the launching of terrorist attacks on critical infrastructure and public places, it said.

The proposed high-level briefing also aims to provide an opportunity for Council members to build on the recent deliberations of the Counter-Terrorism Committee meeting in Mumbai and Delhi held in late October under the chairmanship of India, to “further share their views on the current state of affairs and to aim to arrive at key principles of the global community’s collective fight against terrorism going forward.”

Among the guiding questions for the meeting is what are the trends that the global collective needs to be wary of in the fight against terrorism and how the sanctity of sanctions regimes against terrorists and terror entities can be safeguarded and made effective in combating terrorism.