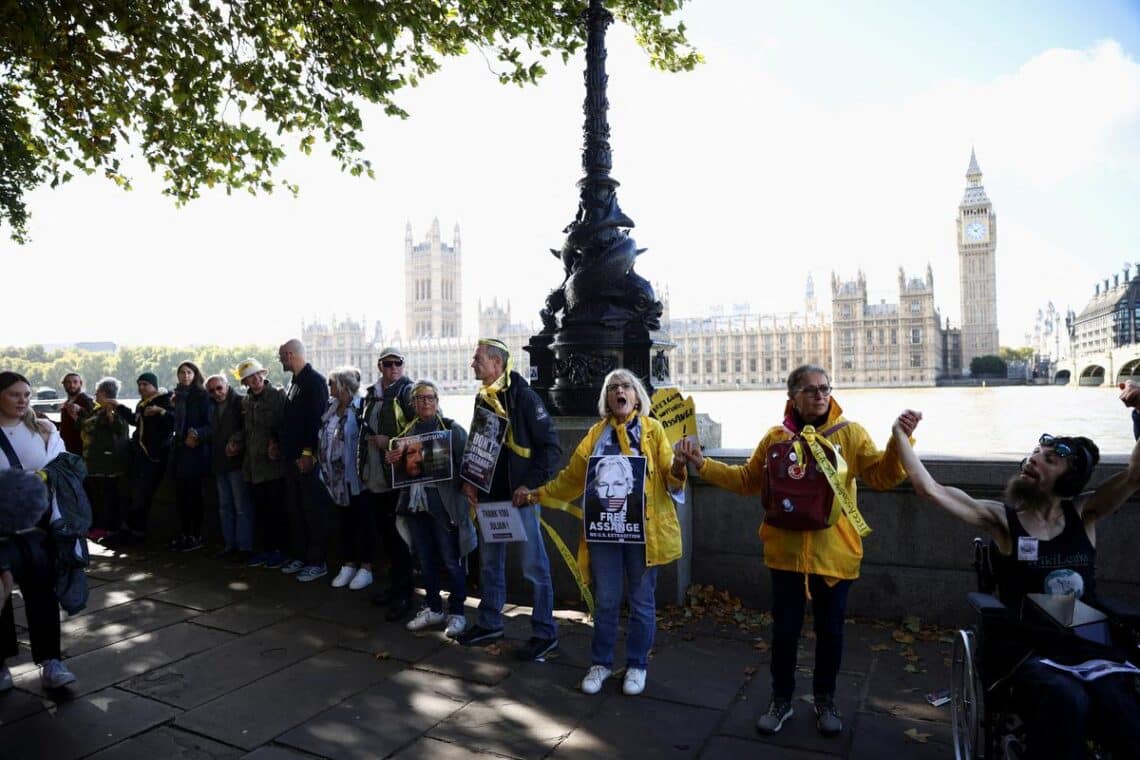 
Supporters of WikiLeaks founder Julian Assange create a human chain outside Houses of Parliament during a protest, in London, Britain on October 8, 2022. File
| Photo Credit: Reuters

Asserting that “publishing is not a crime”, five international media organisations, who published the first tranche of documents of Wikileaks in 2010, have asked the United States government to end the prosecution of Julian Assange for publishing secrets. They said that his indictment threatens to undermine “freedom of press”.

Twelve years ago, on November 28, 2010, five international media outlets – The New York Times, The Guardian, Le Monde, El País and Der Spiegel – published a series of revelations in cooperation with WikiLeaks that made headlines around the globe.

The set of 2,51,000 confidential cables from the U.S. state department named “Cablegate”, disclosed corruption, diplomatic scandals and spy affairs on an international scale.

For Julian Assange, publisher of WikiLeaks, the publication of “Cablegate” and several other related leaks had severe consequences. He was arrested in London on April 12, 2019, on a U.S. warrant, and has since been in a high-security British prison usually used for terrorists and members of organised crime groups. He faces extradition to the U.S. and a sentence of up to 175 years in a maximum-security prison there.

In a joint open letter to the United States administration, the media outlets said: “This indictment sets a dangerous precedent, and threatens to undermine America’s first amendment and the freedom of the press”.

Even now in 2022, journalists and historians continue to publish new revelations, using the unique trove of documents, the editors noted.

“This group of editors and publishers, all of whom had worked with Assange, felt the need to publicly criticise his conduct in 2011 when unredacted copies of the cables were released, and some of us are concerned about the allegations in the indictment that he attempted to aid in computer intrusion of a classified database. But we come together now to express our grave concerns about the continued prosecution of Julian Assange for obtaining and publishing classified materials,” the letter said.

The Obama-Biden administration, in office during the WikiLeaks publication in 2010, had refrained from indicting Mr. Assange, explaining that they would have had to indict journalists from major news outlets too. However, this changed under the Donald Trump administration which relied on an old law, the Espionage Act of 1917, which has never been used to prosecute a publisher or broadcaster.

The editors noted in the letter that “Obtaining and disclosing sensitive information when necessary in the public interest is a core part of the daily work of journalists. If that work is criminalised, our public discourse and our democracies are made significantly weaker. Twelve years after the publication of “Cablegate”, it is time for the U.S. government to end its prosecution of Julian Assange for publishing secrets”.