This is an essay on an undefined actress, from floral fun to violent vamp, with Shakespeare and chiffon. 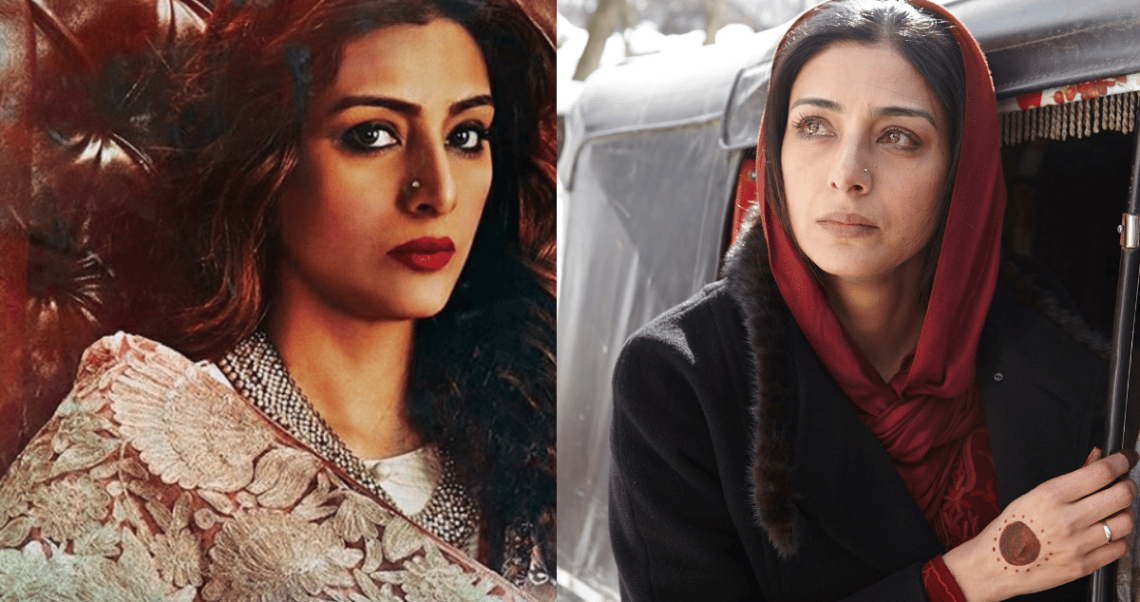 Tabu‘s unpretentiousness is the first thing you notice about her. When asked how she prepared for her role as Ghazala in Vishal Bhardwaj’s Haider, a rendition of Shakespeare’s Hamlet filled with untidy characterization, she laughed it off, stating she didn’t bother reading the original text. Purists reacted angrily, but this is who she is. Surprisingly, this does not influence her profession, as she is an actress for the archives to reminisce about and for us to salute today.

It’s been twenty-five years since she received the Filmfare Award for Best Female Debut for Vijaypath. This was the film that provided her with the definitive ‘break’ in an industry where the breakthrough, solo success, and comeback are the three most important movies for an artist.

So, in honor of the amazing actor she is and the time she has spent with us as a cinema lover’s companion, we take you through moments of Tabu being… well, Tabu.

Tabu is simply placing the feminine into a boy’s club and holding her own. She demonstrates the range- sorrow, humor, dignity, indignity (Remember how she pulls off lip-syncing the lyrics to the crazy song Mein ladki popopo, tu ladka popopo, hum do milein popopo, ab aage hoga kya?), but always human, always vulnerable, always believable.

She appears in the movie as Suniel Shetty’s arch-rival for the same position. Love blossoms after they exchange notes about their common misery and poverty. She tries to accomplish it all in this scenario, ironing shirts, boiling milk, caring for her family, and falling in love, all with remarkable ease, even if some things go wrong—look at her expression through the burnt shirt!

A Suitable Boy did not fulfill its full potential as a story, in our opinion. But Tabu, the simple thrill of watching her unravel her poetry and the men who are charmed by it, the joy of watching her be her most seductive self, more than makes up for the series’ shortcomings.

We’re going with Kavita Seth’s expression when she sings Mujhe Bura Kahiye because of its amazing sweetness, playfulness, and poignance. It’s delicate and fun, of course, because it’s stated in a loving moment. It’s moving because it’s spoken by a character who has already been consigned to society’s moral outskirts.

“Mujhe Bura Kahiye” is so loaded with a reference to her own social status, and it is delivered with such grace that we can’t begin to describe its beauty.

We couldn’t possibly pick just one moment from this film, which is one of Tabu’s most well-known. Here’s another scene from the movie that blew us away.

You’re worried that your son will join the militant movement. He’s maturing into his convictions, and you’re maturing into your anxiety for his safety as a mother. You just want him to live; you don’t care about ideals because you value life far more. Shakespeare’s creation is you. How can you persuade your son to flee the state in search of greener pastures?

Sriram Raghavan’s picture is a delightful take on evil, eliciting not only fury and sympathy but also shock, as Fitoor did. Tabu has already carried out her first assassination.

She’s preparing for her second to conceal her tracks. The viewer never wonders, “How could someone like this exist?” because of the comfort and credibility of the character. We believe she exists, and we’ve bought into it.

This film is a seminal work on vampirism. She portrays a murderess who lusts, loves, murders, covers it up, and then murders some more. She portrays a character with no remorse, but suddenly she makes a mistake, as the beauty of the piano lilts with an awareness of the murder she just organized, and possibly the love she lost.

Tabu is married, but her husband is frequently absent, engrossed in his celebrity and womanizing regime. As her music teacher Mohnish Bahl sings in the rain, she is alone, her biological need for desire piqued. She’s engrossed, but she’s also cautious. Should she give in to her carnal urges?

What about loyalty? Tabu first mentioned a feminist rewriting of desire in 2000. Before she leaves the house and the jerks that live in it, she lays bare all her sentiments that she couldn’t express otherwise in this final climactic take-down session. The chains have broken and vanished. She expresses herself.

She transforms into Tabu the tease as Irrfan asks her why she went yes to his proposal all those years ago. She knows exactly what he wants from her, but she refuses to express it. Finally, she looks at him and asks, “You want me to say I Love You like those Americans?” She holds his shoulders and kisses his forehead.

She spoke exactly what he wanted her to say. Words have no place in this situation. Her journey will take her through a maelstrom of immigration and children who gradually remove themselves from her. Her restraint, on the other hand, will see her through.

She’ll be performing as a bar dancer for the second time. She couldn’t move the first time because she was so embarrassed. There’s that, too, but there’s also a feeling of joy in discovering family, laughter, and self-respect within the industry’s moral mud.

She is establishing herself in the city, as well as in the circumstances of orphanhood and extreme poverty, as the film progresses.

This is where the inflection occurs. Tabu gives him this scowl and goes away when Atul Kulkarni steps into the room and asks, “Soti kya hai mere saath?” That’s it; diva Tabu is set—unwavering in her submission to any higher force unless she chooses to do so on her own. It’s no surprise that this film earned her her second National Film Award for Best Actress.

Much of this film, Vishal Bhardwaj’s first attempt at adapting Shakespeare, Macbeth, revolves around how the hunger for power, and lust as a byproduct of love, may lead to self-destructive behavior.

She may persuade Irrfan Khan, Macbeth here, to commit murder by conjuring the power he feels when he makes love to her, letting him realize how amazing it would feel to wield that type of control over many people.

How do you inform your sweetheart that his best friend, who also happens to be your brother, has passed away? Imagine you’re a member of a counter-culture, opposing a brutal state, and you’ve been exposed to death to the point of desensitization.

In the middle of the Sikh insurgency, Gulzar’s dialogues, Tabu’s tears, and Chandrachur Singh’s misery is a beautiful moment for cinema, one of confrontation, and pain, but also love beneath all that bloodshed. For this picture, she got her first National Film Award for Best Actress.

A Heart-Felt Letter To Peter Parker