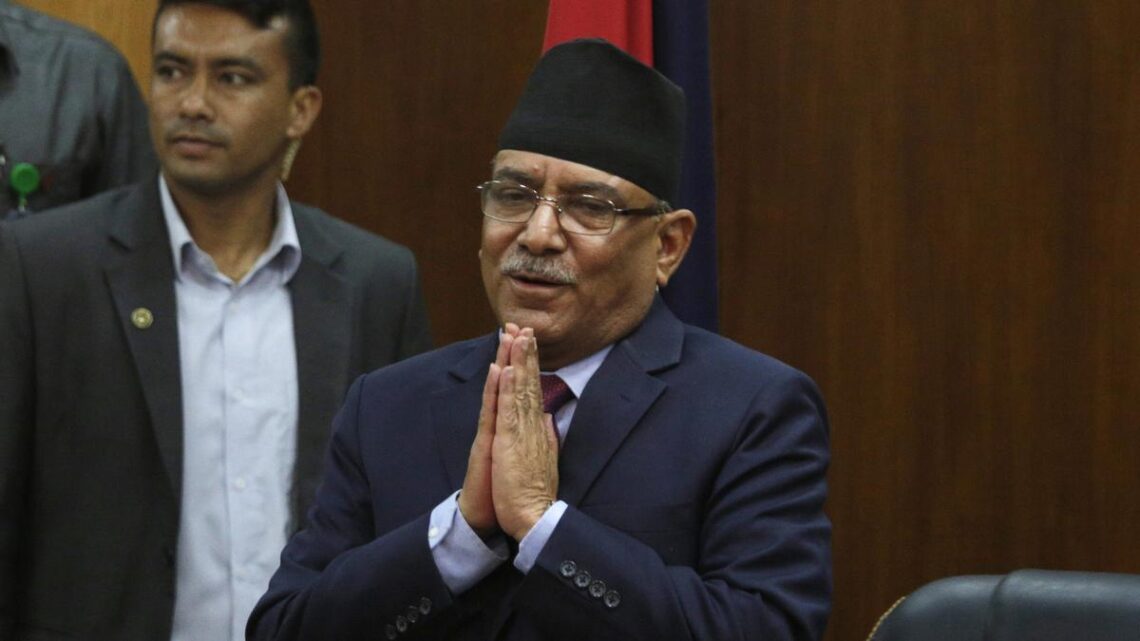 Nepal President Bidhya Devi Bhandari on Sunday appointed Pushpa Kamal Dahal, leader of the parliamentary party of the Communist Party of Nepal (Maoist Centre), Prime Minister of the Himalayan nation. A communication from the President’s Office in Sital Nivas said Mr. Dahal, better known as ‘Prachanda’, would be sworn in as Prime Minister at 4 p.m. on Monday.

China, Pakistan may jointly hit out at India sooner or later: Rahul Gandhi

Congress leader Rahul Gandhi has said both China and Pakistan are together against India and may jointly hit out at the country sooner or later. During an interaction with ex-servicemen, which he shared on his YouTube channel on Sunday, Mr. Gandhi said India was “extremely vulnerable” and must act now or else, it would suffer a “huge setback”. The former Congress chief said the clashes between Indian and Chinese soldiers at Galwan and Doklam were linked and were part of China’s strategy to hit India together with Pakistan, a country with which it now had economic ties too.

A 40-year-old man, who returned from China two days back, has tested positive for COVID-19 following which he has been isolated at his home in Agra, Chief Medical Officer Arun Srivastava said on December 25. His samples will be sent to Lucknow for genome sequencing, he said.

Bhutan’s then king Jigme Singye Wangchuck warned India of pressures from China in 1999, writes former R&AW chief A.S. Dulat in his latest book. Mr. Dulat says the former King’s words were “prophetic” about India-China tensions in Doklam in 2017 and the build-up of infrastructure by China that has followed. He also says that New Delhi’s “muscular policy” on a range of issues, including the situation in Kashmir, and tough foreign policy in the neighbourhood led to “failures”.

Millions of people hunkered down against a deep freeze on Sunday to ride out the winter storm that has killed at least 34 people across the United States and is expected to claim more lives after trapping some residents inside houses with heaping snow drifts and knocking out power to tens of thousands of homes and businesses.

Changes in the National Democratic Alliance (NDA) constituents and equations in Bihar and Maharashtra have compelled the BJP to increase its list of “vulnerable” seats in the Lok Sabha from 144 to 160 in the party’s internal assessment, with plans already in motion to pay extra attention to these seats in the run-up to the general elections of 2024.

Ladakh stand-off is a signal to India against infrastructure construction in ‘disputed territory’, says expert

The 2020 stand-off in eastern Ladakh was a signal from China to India over how the situation is likely to play out if it continues to pursue infrastructure construction in the “disputed territory”, Isaac B. Kardon, Assistant Professor at the U.S. Naval War College said. These observations also resonate with the recent clash between soldiers of the Indian Army and China’s People’s Liberation Army (PLA) in the Yangtse area in the Tawang sector of Arunachal Pradesh. At the same time, China will continue to deny India space on the global stage owing to widening asymmetries, experts noted.

An eventful 2022 for Congress but bigger challenges await

Other than the challenge from regional parties, there is a growing challenge from the Aam Aadmi Party (AAP) that is seeking to fill the vacuum for a national alternative to the BJP. Going ahead, the electoral challenge in 2023 includes wresting back Mr. Kharge’s home State of Karnataka and retaining Chhattisgarh and Rajasthan. The leadership battle between Chief Minister Ashok Gehlot and Sachin Pilot in Rajasthan is far from over but the leadership is yet to take a decision. In Karnataka too, the party faces intense factionalism between former Chief Minister Siddaramaiah and party chief D.K. Shivakumar camp.

While extending greetings for Christmas, Bahujan Samaj Party (BSP) president and four-time former Uttar Pradesh Chief Minister Mayawati on Sunday targeted the fundamentalist politics practised in the country over religious conversion. She claimed that the politics played in India over religion harms the country big time.

Union Home Minister Amit Shah on Sunday said the BJP’s victory in Gujarat had proved that the State was the party’s fort and would remain so. He pointed out that new parties that had sought to stake a claim in the State were wiped out in the poll.

Sania Mirza of U.P. on the flight path to be India’s first Muslim woman fighter pilot

If all goes well, Sania Mirza, daughter of a TV mechanic hailing from Mirzapur district’s Jasovar village in Uttar Pradesh, might become India’s first Muslim woman fighter pilot after she cleared the prestigious National Defence Academy (NDA) examination with an overall rank of 149. After the declaration of results, many reports claimed that India will get its first Muslim woman fighter pilot, which forced the Indian Air Force (IAF) to put the facts in perspective through a statement which categorically stated the chances of Ms. Mirza becoming an IAF fighter will depend on her completing successfully multiple courses which she will undertake in the academy during the next four years.

A graffiti camp that was promoted as an opportunity for creative expression turned out to be too hot for IIT Gandhinagar to handle. The Institute has now erased all the walls, around a dozen, painted over two nights by about 15-20 students, with professional artists from National Institute of Fashion Technology (NIFT) mentoring them. The ART@IITGN, the campus’ art wing, had organised the event in the first week of November.

A Congress functionary attached to the office of party president Mallikarjun Kharge on Sunday courted controversy by calling former Prime Minister Atal Bihari Vajpayee a “British Informer” during the Quit India movement. The remark has come a day before Rahul Gandhi’s scheduled visit to the late leader’s memorial.

China’s military said it had conducted “strike drills” in the sea and airspace around Taiwan on December 25 in response to what it said was provocation from the democratically-governed island and the United States.

India’s batting approach in the two Tests against Bangladesh was a far cry from the aggression promised by KL Rahul and the buck stops at the stand-in captain’s doorstep after a close shave in the Mirpur game which could have gone the home team’s way.

Top Wildlife Resorts In India For An Exciting Stay