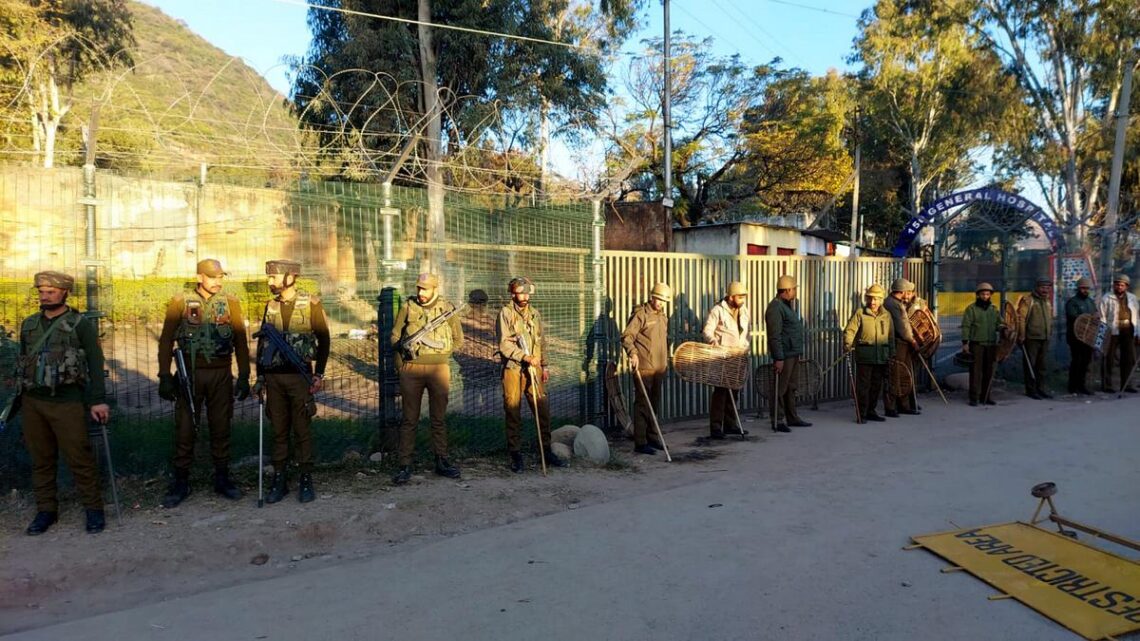 
Security personnel stand guard after protests following killing of two local youths in alleged firing by a sentry of an Army camp in Rajouri on December 16, 2022.
| Photo Credit: PTI

China is expanding its chain of model villages or Xiaokang (moderately prosperous) villages close to the Line of Actual Control (LAC), opposite Uttarakhand, Sikkim and Arunachal Pradesh, including in the Chumbi valley which faces the strategically crucial Siliguri corridor, according to defence sources. This is in addition to continuing its infrastructure development and additional deployments along the LAC.

Two civilians were killed in a “firing incident” outside an Army camp in the Pir Panjal Valley’s Rajouri district on December 16. However, locals were demanding a probe into the incident. “In an early morning firing incident by unidentified terrorists at Rajouri near Military Hospital, there has been fatal casualty of two individuals. The police, security forces and civil administration officials are on the site,” the Army said in a tweet.

‘Kashi Tamil Sangamam’ is an attempt to bring a cultural renaissance that will unite the country and connect different languages, Union Home Minister Amit Shah said on Friday. He was addressing the closing ceremony of the 30-day event, during which nearly 2,500 visitors from Tamil Nadu arrived in Varanasi

Finance Minister Nirmala Sitharaman informed the Rajya Sabha on December 16 that there is a coordinated effort within the government to contain Chinese digital loan apps, and ensure that the common man is not being cheated by them. Action is being initiated against those who are misusing such apps, she added.

Terming the exercise to link Aadhaar with election photo identity card (EPIC) as ‘voluntary,’ Law Minister Kiren Rijiju on December 16 told the Lok Sabha said that people who don’t link their Aadhaar with EPIC will not be struck off the voters list. In response to another question on whether the government would consider banning opinion polls after the announcement of election schedule, the Law Minister replied in the negative.

Based on current analysis by stakeholders concerned, about 1.3 terabyte data were encrypted in the recent ransomware attack on the All-India Institute of Medical Sciences’ (AIIMS) information technology network by unknown threat actors, according to the government.

A grammatical problem that has defeated Sanskrit scholars since the 5th Century BC has finally been solved by an Indian PhD student at the University of Cambridge, it emerged as his thesis was published on Thursday. Rishi Rajpopat made the breakthrough by decoding a rule taught by Panini, known as the father of linguistics, and is now encapsulated in his thesis entitled ‘In Panini, We Trust: Discovering the Algorithm for Rule Conflict Resolution in the Astadhyayi’.

Bill Kirkman, a long-time U.K.-based columnist of The Hindu, a former Africa and Commonwealth correspondent for The Times newspaper, and an Emeritus Fellow of Wolfson College Cambridge, passed away on November 25 after a brief illness. His 20-year association with The Hindu began in 1994, with the launch of ‘Cambridge Letters’, a weekly column that over time enthralled readers and won him a passionate following.

The Madras High Court’s former Chief Justice Vijaya Kamlesh Tahilramani, whose resignation from the coveted post created a furore in 2019, has decided to maintain silence even after the Lok Sabha was informed of the Central Bureau of Investigation (CBI) not having found any cognisable offence made out in the reference made against her by the Supreme Court’s Secretary General on September 26, 2019.

The Punjab Police on Friday claimed to have solved the Tarn Taran rocket propelled grenade (RPG) attack case with the busting of a foreign-controlled terrorist module leading to the arrest of six persons, including the two juveniles in conflict with law, who had carried out the terror attack at Sarhali police station, on December 9.