Chills, Thrills and Horrors Films: Here Are Top 10 movies to watch this Halloween

You may not be able to hit up a costume party in this pandemic, but these horror movies will help you celebrate the Halloween just the same in 2020.

by Mantasha Naseem
in Entertainment, Infotainment, Listicles
Reading Time: 7 mins read
A A 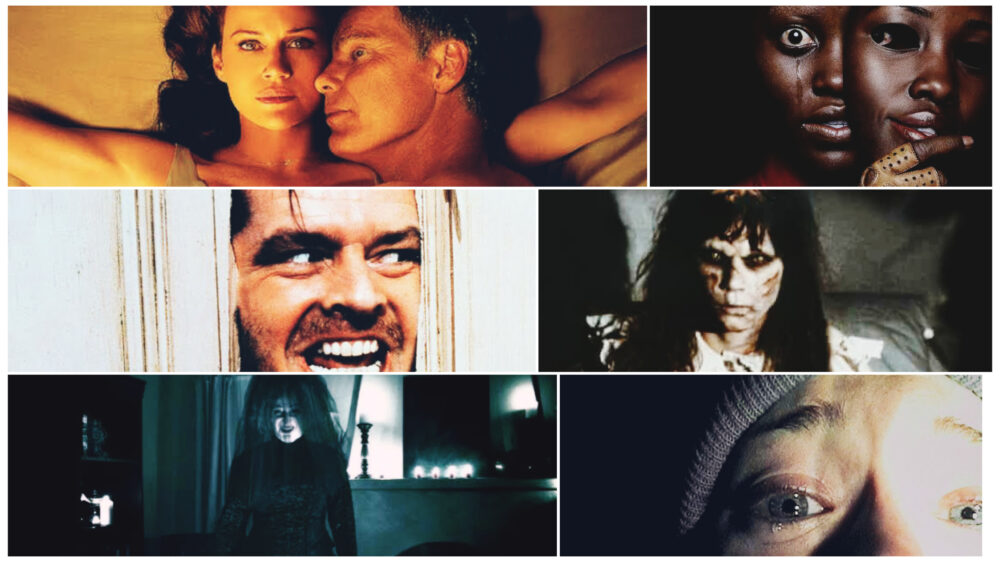 As leaves start to alter and, you know it’s Halloween in the air. Witnessing the current scenario It will be adequate to say, this year’s Halloween is on ice. Costume parties are being suspended until 2021, and even the most heroic kids might hesitate at putting a mask over the one they’re already wearing.

While 2020 has been terrifying enough on its own, if you’ve got space for just a little more fear in your soul, TSA brings to you the Top 10 Halloween movies to binge, from old classics to new favourites, to keep your hallow spirit high.

So grab the popcorn and a pumpkin spice latte, and cuddle up to your blankets with one of our favourite movies that just scream Halloween to you. (Click film’s name to watch the trailer).

Hereditary, one of the best horror movies of the year, will set a benchmark for all distinct films both inside and outside of the horror genre.
The plot revolves around Artist Annie Graham(Toni Collette) a miniature artist who after the death of her mother, begins to notice some peculiar activity around her house. After another tragedy, Annie begins to spiral out of control. Is there a supernatural force trying to manipulate her family, or is it all in her head?

Well, Ready or not, here I come”, as an idiom I’m sure all of us shouted as kids, but The 2019 movie, Ready or Not takes the game of Hiding and Seek to a whole new, insane, thrill level.

Ready or Not is a blood-soaked horror-comedy. It takes a tonal transition you won’t see coming, and the movie ruins no time in throwing you right into the plot: which began with “A bride’s wedding night takes an ominous twist when her unusual new in-laws pressure her to take part in a terrifying game.”

Grace, the bride (Samara Weaving), who grew up in foster homes, is marrying Alex (Mark O’Brien) a member of an elite family, whose members aren’t doing a great job at concealing the fact that they think Grace is beneath them.

After years of being loved for his comedic work as the co-creator of Key and Peele, Jordan Peele rolled into the horror genre for his first-ever horror movie behind the camera as the writer-director of Get Out, 2017 which made him win an Oscar for Best Original Screenplay for his work as a black writer.

Carrying the baggage of one of the best horror scriptwriter, Peele didn’t disappoint us with Us.

The plot began with Adelaide Wilson (Oscar winner Lupita Nyong’o) Accompanied by her husband, son, and daughter returns to the seaside home where she grew up as a child. Troubled by a traumatic experience from the past, Adelaide grows up increasingly anxious that something bad is going to happen. Her worst fears soon evolved as reality when four masked strangers tumble upon the house, forcing the Wilsons into a fight for survival. But When the masks come off, the family is stunned to learn that each attacker is their doppelganger.
Stream the movie here: HULU

After a year of being an instant horror tycoon with “that scene” in Hereditary, Ari Aster has utilized his slow-burn technique to Midsommar, a disconcerting, two-and-a-half-hour nightmare journey in a broad daylight to a (thankfully fictional) traditional Swedish summer festival that only happens every 90 years.

The plot focuses on a gang of American college scholars, entailing a not-so-happy pair, Dani (Florence Pugh) and Christian (Jack Reynor) who are tempted to take part in a competition, considering it be fun.
What begins as an idyllic refuge quickly deteriorates into an increasingly brutal and unusual competition at the hands of a pagan cult.

The less you know getting on into Midsommar, the more helpful it will be, by helpful, we imply “disturbing”.
This is a must-watch for all the ethical horror junkies who’ve grown cold-blooded to jump scare-filled scenes.

If you wish to have family time this Halloween, we have a go-to Halloween comedy for you!
One of the classics, Ghostbusters. But don’t take it lightly as you might not able to sleep, with lights off for days.

Plot: After the members of a team of scientists (Harold Ramis, Dan Aykroyd, Bill Murray) lose their cushy jobs at a university in New York City, they agreed to become “ghostbusters”

To earn money by a high-tech battle with the supernatural, like any classic they are slipped into a gateway to another dimension, a door that will expel evil upon the city.
Stream the movie here :
Amazon Prime

Well, When you have A KUBRICK MOVIE on your plate, it knows how to make you look stupid, the first time you watch it and don’t understand, but when you re-watch it, you just have to admire KUBRICK.
Based on the Stephen King novel The Shining is the classic 1980 directed by Stanley Kubrick a story about a man ‘ Jack Nicholson‘, who plays the part of a husband and father, and goes crazy while working as the caretaker of the Overlook Hotel from a mixture of “cabin fever” and the dark and paranormal past of the hotel. Blood oozes throughout this film — literally — in several popular scenes.

KUBRICK is very brave for utilizing a theme that might influence some people and the nicest part of the movie is the cinematography.

You can’t call yourself a horror movie enthusiast unless you’ve seen The Exorcist.

Approximately after four decades of its release, The Exorcist is nonetheless the scariest movie ever made—and stars one of the most dreadful movie villains ‘ Regan MacNeil’, an innocent 12-year-old girl possessed by a sinister force.

Are you a fan of horror documentary movies? Well here is your go-to movie.
When The Blair With Project was originally released in 1999, people didn’t know whether it was true or fiction.

Publicized as “found video footage,” it is a purportedly true story of three students.
The missing footage of a group of film students who get lost in the woods while examining the local Blair Witch is eventually found.
After watching the movie You wouldn’t like to hike at night anymore.

Imagine travelling into a parallel world in your sleep and never coming back! Intriguing much?

Saw creators James Wan and Leigh Whannell are back to try their hands at another sort of scare in the movie Insidious, a domestic ghost story in which exorcists fight otherworldly forces to reunite parents and kids.

The plot revolves around Two parents who think they’ve left their troubles behind when they walk out of a previous haunted house but it Turns out, they carried the problem with them—and it’s their son Dalton.

As the Saw films are about the brutal foreshadowing of suffering, Insidious is the opposite: It’s a machine for crying out “Boo!” With different scary elements.

As the name suggests, the movie is the opposite of what you think.
The story begins with a woman who accidentally kills her spouse during a kinky game. Handcuffed to her bed with no possibility of rescue, she begins listening to voices and seeing strange illusions, is it all in her head?

Always believed to be impossible to adapt into a film, And yet Mike Flanagan used the reasonable credibility gained from the success of “Oculus,” “Hush” and “Ouija: Origin of Evil” to finally make his teenage dreams come true making the best version of “Gerald’s Game”, that stands as one of the best adaptation of Stephen king’s novel.

So what your idea of a perfect Halloween movie night? Share your suggestions down in the comment section 🙂