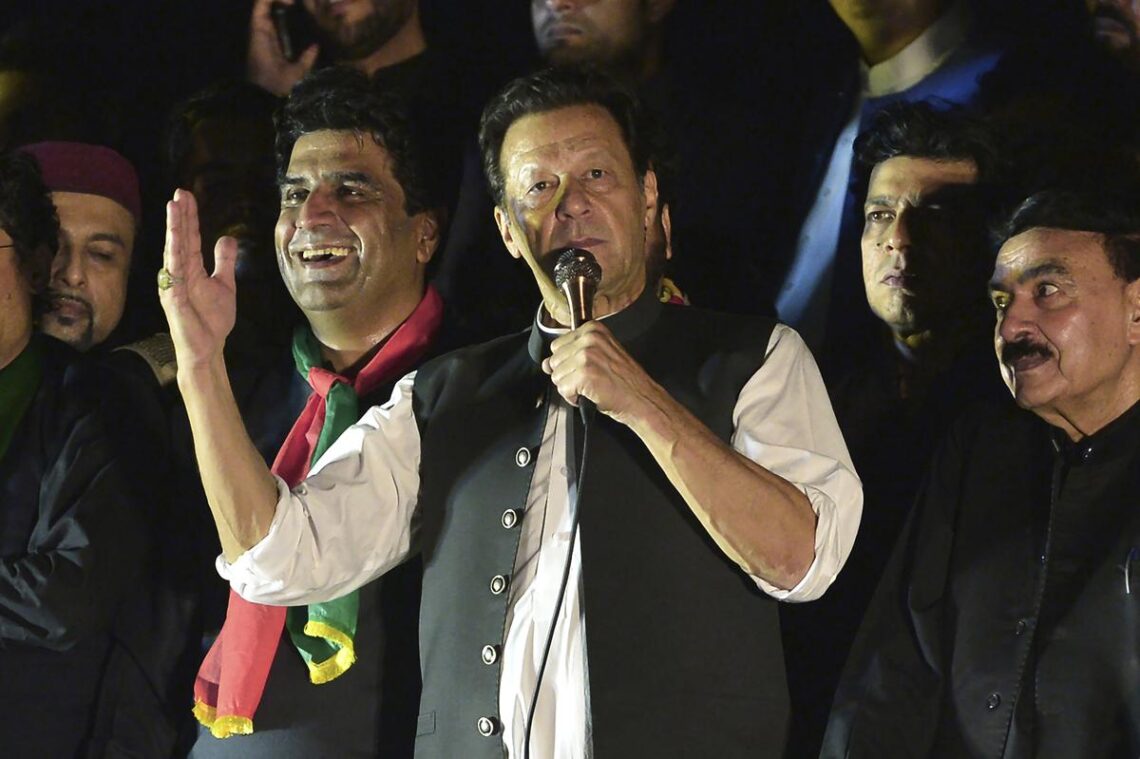 A four-member bench announced the verdict against Khan at the ECP Secretariat in Islamabad.

A four-member bench announced the verdict against Khan at the ECP Secretariat in Islamabad.

Pakistan’s Election Commission on October 21, 2022, disqualified former Prime Minister Imran Khan for five years in the Toshakhana case for hiding proceeds from the sale of gifts he received from foreign leaders.

After the ruling, the Pakistan Tehreek-e-Insaf (PTI) chairman cannot become a member of the parliament for five years.

The ruling coalition government lawmakers had filed a case with the Election Commission of Pakistan (ECP) in August against 70-year-old Khan seeking his disqualification for failing to reveal the proceeds from the sale of gifts that he purchased at a discounted price from the state repository, also called Toshakhana.

The ECP after hearing the case had reserved its judgment on September 19 on the conclusion of the proceedings.

The four-member bench of the ECP, headed by Chief Election Commissioner (CEC) Sikander Sultan Raja, on Friday unanimously ruled that Mr. Khan was involved in corrupt practices and was disqualified as a member of the parliament.

The ECP also announced that action would be taken against him under the corrupt practices laws.

Asad Umar, Secretary General of Mr. Khan’s party, announced that the decision would be challenged in the Islamabad High Court.

Mr. Khan, who came to power in 2018, apparently received expensive gifts from rich Arab rulers during official visits, which were deposited in the Toshakhana. Later he bought the same at a discounted price as per the relevant laws and sold the same at hefty profits.

Though morally apprehensive for rulers like Mr. Khan, who always takes a high moral ground and leaves no occasion to castigate his opponents as “corrupt”, the purchase and sale were legally allowed.

The former premier informed the ECP during the hearing that the sale of the gifts that he had procured from the state treasury after paying ₹21.56 million fetched about ₹58 million.

The gifts, among others, included a Graff wristwatch, a pair of cufflinks, an expensive pen, a ring and four Rolex watches.

According to his opponents, Mr. Khan failed to show the sales in the income tax returns, making him liable.

Established in 1974, the Toshakhana is a department under the administrative control of the Cabinet Division and stores precious gifts given to rulers, parliamentarians, bureaucrats, and officials by heads of other governments and states and foreign dignitaries.

Clashes between Pakistan Tehreek-e-Insaf (PTI) workers and police led to violent unrest in the country as the election commission disqualified former prime minister Imran Khan in the Toshakhana case. During the protests, the police arrested PTI MNA Saleh Muhammad and his guard from the ECP office.

The situation became tense after KP police opened fire on capital police deployed outside the ECP office to neutralise the situation, however it only backfired, ARY News reported.

Moreover, the PTI workers have blocked roads and streets to protest. According to local media, the workers have set ablaze tyres and blocked traffic in Islamabad, Rawalpindi and other cities of Pakistan.