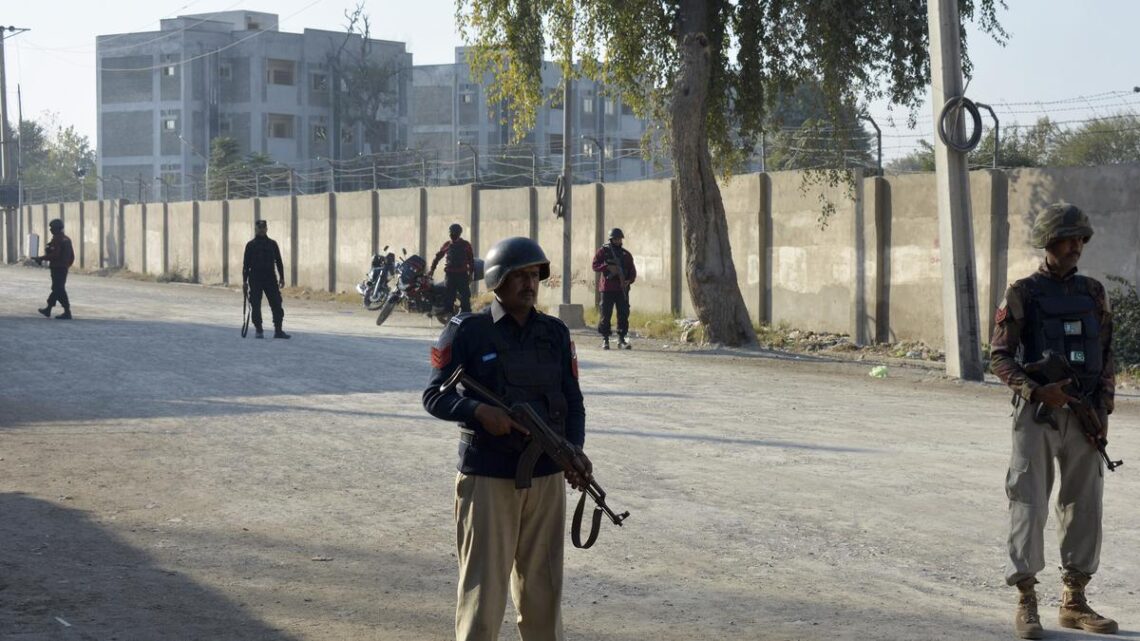 Pakistan Army’s special forces Tuesday stormed a counter-terrorism centre in the restive Khyber-Pakhtunkhwa province and killed all 33 terrorists, ending a nearly two-day long hostage crisis that had gripped the nation.

Two commandos of the special forces were also killed in the rescue operation that was launched after negotiations between the government and the banned Tehreek-e-Taliban Pakistan (TTP) militants to end the hostage crisis failed.

Defence Minister Khawaja Asif confirmed that “all the terrorists” of the Pakistani Taliban who had taken hostages at a Counter-Terrorism Depart­ment (CTD) centre in Bannu were killed in an operation conducted by the Pakistan Army’s Special Services Group (SSG).

“This operation was initiated on December 20 at 12:30 pm by the Special Service Group and all terrorists were killed,” Mr. Asif said while speaking on the floor of the National Assembly.

He said that 33 terrorists were under arrest at the CTD compound and one of them had managed to snatch a gun from an employee after hitting him in the head with a brick.

The Defence Minister said that two commandos were killed while over a dozen injured during the operation.

Mr. Asif said that the militants had killed two hostages before the rescue operation.

He said that all remaining hostages were freed but didn’t provide their numbers. Earlier, police sources had said that about two dozen officials had been made hostages.

He said that the entire CTD compound was cleared by 2:30pm.

Earlier, officials said that all the terrorists were killed in the operation that lasted 15 minutes.

Footage aired on TV on Tuesday showed plumes of smoke rising in the air from the CTD compound.

The standoff began on Sunday when an arrested TTP militant, who was being interrogated at the Counter-Terrorism Department (CTD) police station inside the Bannu Cantonment, snatched an AK-47 from the police and opened fire.

He then freed other wanted militants being held at the building and together they took control of the compound. They also took several policemen as hostages.

The TTP demanded safe passage for its militants either to South or North Waziristan tribal districts.

The situation in Bannu remained tense on Tuesday as police and security agencies asked residents to remain indoors. A security alert was issued earlier and all schools and colleges in the Bannu district remained closed on Tuesday.

Mobile services in the cantonment area and the surrounding areas were also suspended, officials said.

“The unfortunate aspect of this is that terrorism is again making strides in Khyber Pakhtunkhwa and Balochistan,” the Defence Minister said.

“These 33 (militants) were under arrest regarding this situation and they had a link with multiple groups. The provincial government completely failed in its responsibility regarding the CTD [compound takeover],” he said, in a direct attack on the KP government of the Pakistan Tehreek-e-Insaf party of Imran Khan.

Mr. Asif credited the army for the operation, adding that the provincial government had “no role” in it.

The development comes amid a spate of terror attacks across Pakistan. Four policemen were killed when militants attacked a police station in Lakki Marwat — a district of Bannu division — on Sunday.

On Monday, an intelligence officer was killed in Peshawar, while a suicide attack in North Waziristan claimed the lives of a soldier and two civilians. In Balochistan, back-to-back bombings in Khuzdar injured 20.

On Monday, TTP spokesman Muhammad Khurasani had said that militants from his group seized the compound in Bannu after reports of inhuman treatment of prisoners in the CTD police station by security personnel.

The TTP, set up as an umbrella group of several militant outfits in 2007, last month called off a ceasefire agreed upon with the federal government in June and ordered its militants to stage terrorist attacks across the country.

The group, which is believed to be close to al-Qaeda, has been blamed for several deadly attacks across Pakistan, including an attack on army headquarters in 2009, assaults on military bases, and the 2008 bombing of the Marriott Hotel in Islamabad.

In 2014, the Pakistani Taliban stormed the Army Public School (APS) in the northwestern city of Peshawar, killing at least 150 people, including 131 students. The attack sent shockwaves across the world and was widely condemned.

In a separate incident, at least 50 militants stormed a police station early Tuesday morning in Wana, situated in the tribal district of South Waziristan.

“More than 50 militants stormed into the police station and opened fire, injuring a constable. They took away ammunition, weapons and other equipment,” the district’s chief police officer said.

One militant was killed in the retaliatory fire. The rest have managed to flee, police said.

A search operation is currently underway to nab the culprits, police added.