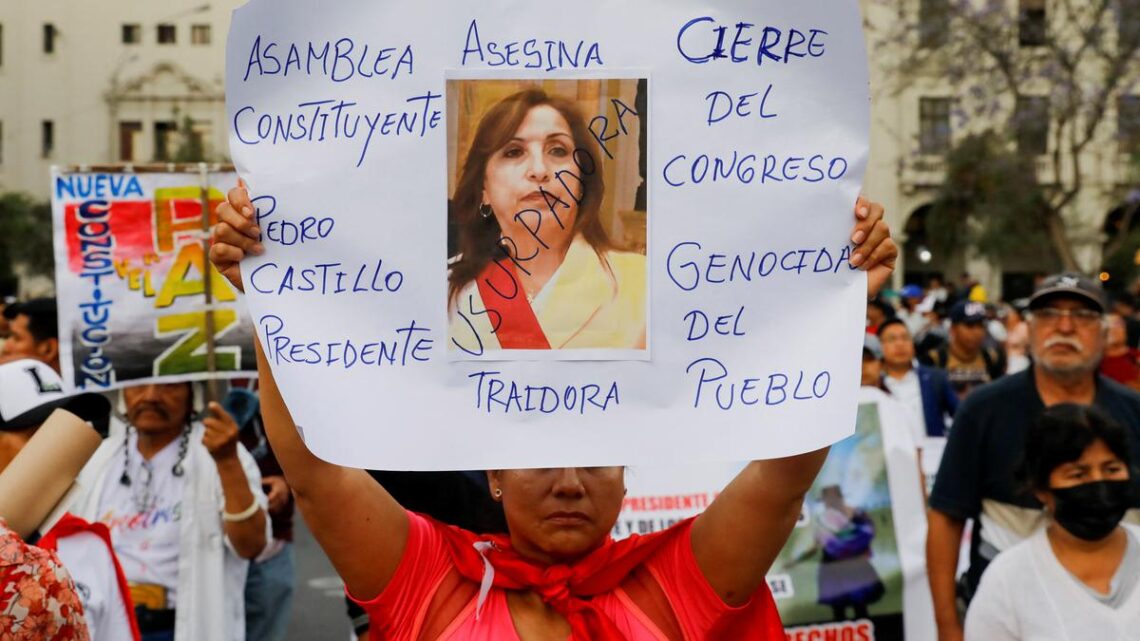 
A demonstrator holds a placard against Peruvian President Dina Boluarte during a protest despite a government proposal to bring forward elections following the ouster of Peruvian leader Pedro Castillo, in Lima, Peru on December 13, 2022.
| Photo Credit: Reuters

Amid violent nationwide protests over Peru’s political crisis, ousted President Pedro Castillo has told Peruvians that he is being “unjustly and arbitrarily detained” and thanked his supporters for their “effort and fight” since he was taken into custody last week.

Mr. Castillo spoke during a hearing on his appeal of his preliminary detention on Tuesday while authorities build a rebellion case against him.

Mr. Castillo was detained Wednesday after he was ousted by lawmakers when he sought to dissolve Congress ahead of an impeachment vote. Prosecutors are hoping to keep him behind bars for up to three years.

“I will never renounce or abandon this popular cause that has brought me here,” Mr. Castillo said. Then, in apparent reference to the violent protests over his ouster, he urged the national police and armed forces to “lay down their arms and stop killing this people thirsty for justice.” The judge interrupted him, telling Mr. Castillo to limit his remarks to legal arguments. He said he would rule on Mr. Castillo’s detention later on Tuesday.

The protests have been particularly violent outside Peru’s capital, Lima. The Ombudsman’s Office of Peru reported Monday that seven people had died since the demonstrations began Wednesday, including five on Monday. All seven happened in rural, impoverished communities — strongholds for Mr. Castillo, a political neophyte and former schoolteacher of peasant roots.

Four of the seven deaths occurred in Andahuaylas, a remote rural Andean community where the poor have struggled for years and where voters overwhelmingly supported Mr. Castillo during last year’s runoff election, which he won by 44,000 votes. Many businesses there remained closed on Tuesday, with streets blocked by burned tires, rocks and tree branches.

Shoe store owner Vilma Zúñiga put up a sign that read “Congress is the worst virus. Out with Dina Boluarte,” referring to Mr. Castillo’s successor. She and other merchants decided to close their doors, losing potential sales ahead of the holidays.

Attorney Ronaldo Atencio, speaking for Mr. Castillo’s legal team, argued that he didn’t raise weapons or organize people capable of overturning the existing government, as Peruvian law requires for someone to be charged with rebellion. He also said Mr. Castillo doesn’t present a flight risk, and never sought asylum from Mexico, as confirmed by the Mexican Ambassador.

Ms. Boluarte, Mr. Castillo’s running mate and vice president, was swiftly sworn in on Wednesday after the Congress dismissed Mr. Castillo for “permanent moral incapacity.” On Monday, she acceded in part to protesters’ demands, announcing in a nationally televised address that she would send Congress a proposal to move up elections to April 2024. She had previously asserted that she aimed to remain president for the remaining 3 1/2 years of her predecessor’s term.

In the streets of Lima, officers have doused protesters with tear gas and repeatedly beat them. Outside the capital, demonstrators burned police stations, took over an airstrip used by the armed forces and invaded the runway of an international airport favoured by tourists and hiking enthusiasts.

The national police reported that 130 officers have been injured in clashes with demonstrators, according to state media.

Ms. Boluarte on Tuesday begged protesters to calm down, explaining that she hadn’t sought the presidency.

“I want to make a call to my brothers and sisters in Andahuaylas, calm down, calm down, please,” she said. “I don’t understand why my brothers… rise up against their compatriot Dina Boluarte when I haven’t done anything for that situation to exist or occur.” She spoke outside a hospital where a girl is being treated for an eye injury caused by a pellet fired during the protests. Ms. Boluarte said she had instructed the national police to not use any lethal weapons, “not even rubber bullets,” and that authorities are working to determine who used them to prosecute them.