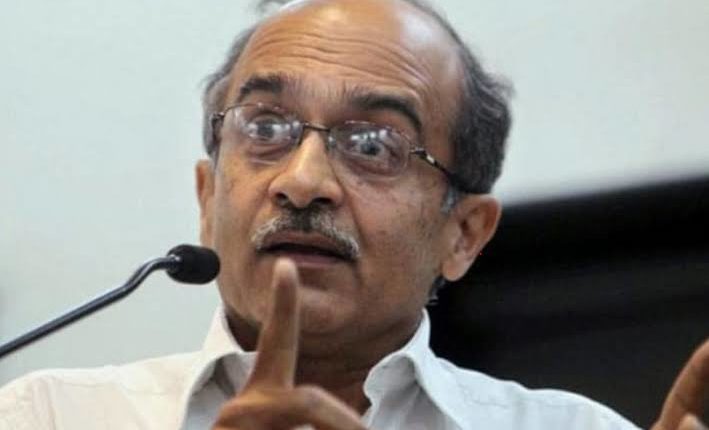 Prashant Bhushan, A Public Interest lawyer In The SC, Says Our Democracy Stifled In The BJP Reign

BJP government has been stifling democracy through an unprecedented assault on elements of democracy, rights, and institutions.

” The last six years have been a watershed in the functioning of our democracy….” said prominent public interest lawyer Prashant Bhushan on the eve of 45th anniversary of the infamous emergency implemented by the then PM Indira Gandhi. A webinar was hosted by LiveLaw on the topic “Stifling Democracy Sans Emergency.”

In this webinar, Mr Bhushan explained how the fundamentals of democracy are being subjugated to the mights of the ruling party in the last six years. He pointed out several aspects of how the BJP government has been stifling democracy through unprecedented assaults on elements of democracy, rights, and institutions.

Over the heinous acts of multiple mob lynching on the street of India, Mr Bhushan told that it was insinuation to strike fear among the Minority and Dalits by Saffron lynch mob patronized by the government and complicit police. “Almost all of the hundreds of cases of mob lynching have been directed against Muslims and  Dalits.” If some influential personality speaks up against the action of the BJP, they are bombarded with abuses and threats over the phone and social media.

Mr Bhushan also bashed the Central Government and the Delhi police over the brutality directed towards the peaceful protester against the CAA-NRC. While condemning the investigation conducted by the Delhi police implicating students of Jamia University of conspiracy to fuel the Delhi Riots, while no action was taken against BJP Leaders Kapil Mishra and Anurag Thakur who were recorded on tape instigating the mob to violence. He also talked about how goons with affiliation with the certain saffron party were allowed to enter into the JNU campus in the gaze of the Delhi police, trashing students and teachers, while no action was taken against the perpetrators who were even recognized in videos.

The influence of the BJP government over institutions like CAG (Comptroller and Auditor General of India),CBI(Central Bureau of Investigation), CVC( Central Vigilance Commission), ECI(Election Commission of India), RBI(Reserve Bank of India), Lokpal, and Judiciarywhich are empowered to look over the functioning of the government was also highlighted by Mr Bhusan. Pointing particularly to the Supreme Court he said, “the assault on the judiciary has led to Supreme Court’s virtually collapse in refusing to act as the guardian of the constitution and custodian of the fundamental rights of the people”. The mitigated response of the apex court in regards to the internet curb in Kashmir, the serious assault on Jamia and JNU and the destitution of migrants during the lockdown, were few of the issues exemplified by Mr Bhushan to assert his statement’s credibility.

A jurisprudence behind sealed cover has evolved in the Supreme Court which has resulted in putting a lid on several sensitive cases like mysterious death of Justice Lohia while trying Amit Shah for conspiracy to murder and Rafael Defence deal scam while mentioning Solicitor General Tushar Mehta as the point man of the all politically sensitive issues for the government.

Several Amendments are made in electoral funding policies by the government saying “the path has been cleared for the payment of bribes by corporate cronies to the ruling party through the device of electoral bonds which guarantee the anonymity of the donors”.

Adding to emasculating influence of the BJP over the ECI he said, “the BJP has received more than 90% of the thousands of lakhs of crores of funding through the electoral bonds in the last three years since these amendments were introduced.”
Referring to the CBI, the prominent lawyer said that “the CBI has degraded further from being a ‘caged parrot’ to a ‘bloodhound’ of the government.” Ousting of the CBI director Alok Verma in the midnight coup of the government when he threatened to investigate the Rafael contract and appointment of Mr Nageshwar Rao as interim director, who subsequently transferred 40 officers in a day on the behest of the government to impede this investigation is crucial evidence of the degradation of the autonomy of the institution.

Furthermore, the institution of CAG, Lokpal, and CVC have been reduced to act a puppet in the hand of the ruling government. In the Rafael deal, he said “government predicted in advance, in a note given to the Supreme Court, 3 months before the CAG report was finalized that the report will redact the details of pricing, it indeed happened”, this redaction of the pricing is contrary to the CAG Act which requires the full report to be submitted to the Public Accounts Committee (PAC). These actions demonstrate the extent to which the CAG has been compromised.
The condition of Lokpal not much different as they have not taken a single case since their appointment while the government-appointed K. V. Chowdary as the chief of CVC, who played a key role in suppressing incriminating documents found in the raid of Birla and Sahara groups which had the name of the PM and CM receiving large sums of money.

The banking sector is not left unscathed in the BJP reign. The ousting of Raghuram Rajan over his questioning of the high-risk loan given to the crony capitalist and Urajit Patel for not complying with the government desire to withdraw 1 lakh crores form the reserve fund and appointment of Mr Shakti Kant Das, a professor of history who can silently do the bidding of the.goverment can be seen as the hegemony of the ruling government over these institutions.

In the current scenario of media, Mr Bhushan said, ” the subversion of the Independent mainstream media nearly complete, even in the absence of formal press censorship.” He added that most of the media houses are owned by the corporate cronies who succumb to the inducement of the ruling government, fanning the communal propaganda of the BJP and RSS and the great length it goes to justify the policy of the government. While The independent journalist based out of internet platform, who don’t kneel to the propagandas of the BJP are intimidated and attacked with draconian laws.

The accusations of Prashant Bhushan will truly provoke every intellectual to ponder upon the idea that probably India has been under emergency for the last six years without actually being declared one.

Plastic Industry is encashing the opportunity created by COVID-19.