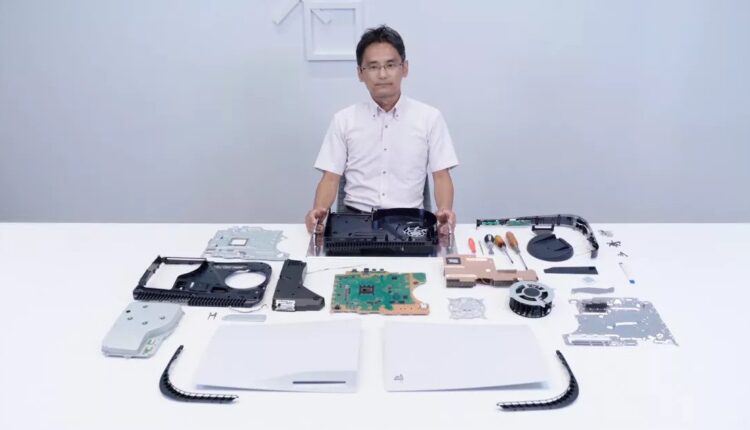 PS5 Teardown: What powers the PS5?

Sony dropped a PS5 teardown video, yesterday without much notice. The teardown showcased the PS5 design and the special cooling system that they are using to cool PS5.

PlayStation in their blog finally revealed the full details regarding the PS5 and its design. The teardown was concise and short. However, I feel like they should have revealed it a while back. To say the least, the PS5 design is very interesting and they are implementing some amazing tech.

Yasuhiro Ootori, head of Sony’s mechanical design for the PS5, showed off of the different internal and external components of the PS5 in the teardown.

This time around, you will need a stand to make the PS5 place vertically and horizontally, this is due to the curvy design of PS5. Don’t worry though, the stand is included in the box. The stand is secured on the PS5 with a single screw. They have thoughtfully placed a compartment in the stand where you can keep the screw too, this is so much like Japanese Engineering, everything is meticulously planned.

The side panels are can be opened easily; you don’t need to remove any screws. Once the side panels are open you can access the M.2 slot, through which you can install an external SSD to expand the storage of your PS5.  The whole console can be easily removed from APU, Memory to Power Supply. The PS5 will be extremely easy to repair.

For the CPU, PS5 is using a Zen 2 8c/16t CPU that clocks at 3.5GHz, I can’t emphasize enough how big of an upgrade it is from the Jaguar CPU of PS4. The GPU is a custom RDNA2 which clocked very high at 2.23GHz.

PS5 Price for India Revealed: The Prices Will Shock You!

PS5 User Interface Revealed: know all about the next-gen…

For the SSD, the I/O meets the SSD modules via a 12 channel interface. They have also designed a custom I/O which removes all the bottlenecks between SSD and GPU. Essentially, the SSD is so fast that there will no ‘load screens’ and you can see much bigger worlds. You can expect GTA 6 to be truly massive if it launches on PS5.

The cooling is where the money’s at. Sony has engineered an amazing cooling solution that took them “2 years to develop”. For the airflow, they are using a big fan that measures 120mm diameter, 45mm thick with a double-sided intake. Sony has also engineered a very big heatsink, which “achieve the same performance as vapour chamber” despite the popular belief, ‘vapour chamber’ is not superior to the heatsink, both of them provide the same thermal performance.

However, the heart of this cooling solution is the ‘liquid metal’. Liquid Metals are metals that are liquid at room temperature. It has all the goodness of Metal, like Very High Thermal Conductivity. However, with great thermal conductivity comes great electrical conductivity too (except diamonds), so if a drop of liquid metal seeped out of the processor then it can essentially kill the whole system. So, with some clever engineering, they have used Liquid Metal to its fullest potential.

One of the major complaints of PS4 owners was the heat and fan noise which sounded like a ‘jet engine’ taking off. However, I am sure this cooling is silent and will cool the PS5 adequately. The impressions of Japan’s YouTubers from the Hands-On event was the same, where they described the PS5 as cool and quiet even after 80 minutes of use.

Sony’s PlayStation 5 console will go on sale for $499/$399 in the US, Japan, Canada, Australia, New Zealand, and South Korea. on November 12th, with a launch in Europe and other parts of the world on November 19th. Although for India, Sony is yet to announce an official release date.

Also Read: PS5 Hands-On Event: How It Feels To Use The PS5 And How Is It Different From PS4

How Feminist Goals Changed Over The Decades