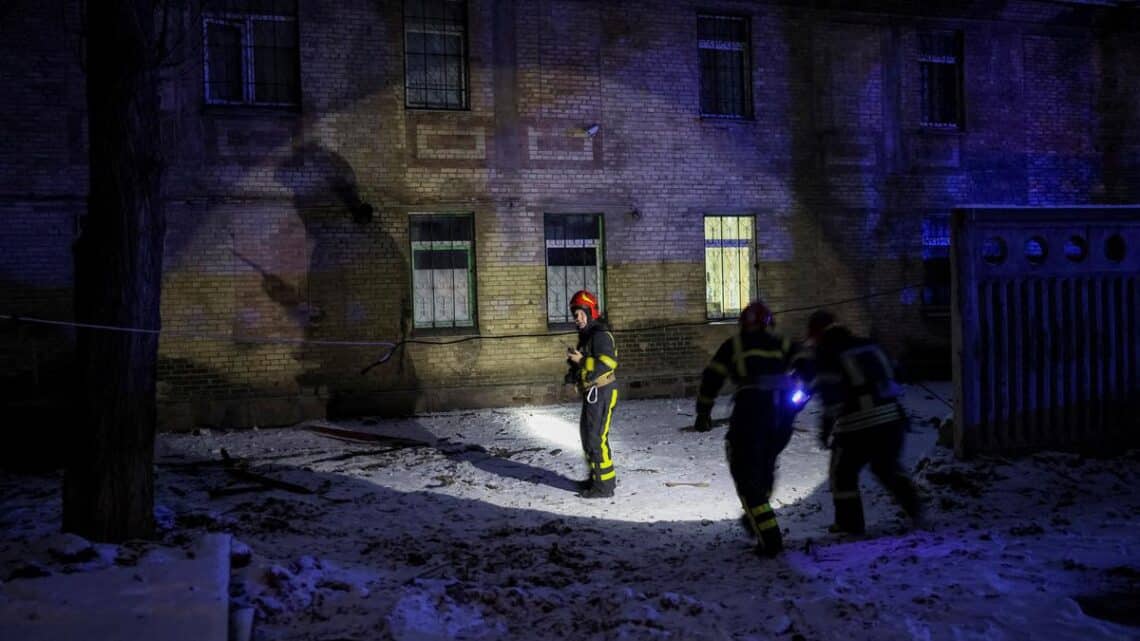 
Rescuers work at the site of a building destroyed by a Russian drone attack, as their attack on Ukraine continues, in Kyiv, Ukraine on December 14, 2022.
| Photo Credit: Reuters

Ukrainian authorities said they thwarted a Russian attack on Kyiv and the surrounding region on December 14 as their air defence system intercepted and destroyed 13 explosive-laden drones, although wreckage from some of them damaged five buildings.

No casualties were reported.

The attempted strikes underlined how vulnerable Ukraine’s capital remains to the regular Russian attacks that have devastated infrastructure and population centres in recent weeks, mostly in the country’s east and south.

But they also highlighted Ukraine’s claims of increasing efficiency in intercepting weapons – something that Patriot missiles from the U.S. may soon help boost.

Ukrainian President Volodymyr Zelenskyy, in a brief video statement, said the “terrorists” fired 13 Iranian-made drones, and all were intercepted.

Also Read | Donors meet in Paris to get Ukraine through winter, bombing

Such drones have been part of the firepower, along with rockets, missiles, shelling mortars and artillery, as Russia targets power stations, water facilities and other public utility sites.

The snow-covered capital remained largely calm after the attack, which occurred around daybreak.

As the working day began, authorities sounded the all-clear.

The head of the Kyiv city administration, Serhii Popko, wrote on Telegram that the attempted strikes came in two waves. Wreckage from the intercepted drones damaged an administrative building and four residential buildings, he said.

A blast left the three-story tax office building in the central Shevchenkyvskyi district with a gaping hole in the roof and blew out windows in parked cars and in a neighbouring building.

Clean-up crews were on site quickly to shovel away the rubble and roll out plastic sheeting to cover the blown-out windows in freezing temperatures.

One man, unfazed, pushed his son on a swing set on a nearby playground as the crews did their work.

Anton Rudikov’s family was sleeping when they heard the sounds of an explosion nearby and smashing windows.

“The children were frightened; the windows flew out,” said Mr. Rudikov, who has daughters ages 13 and 18. “What else can I say?

Local residents told AP reporters they saw fragments from a drone which contained the words “For Ryazan.”

The Kremlin claims Ukraine was responsible for an attack last week on a military base in the Ryazan region of western Russia.

Ukrainian authorities have trumpeted their ability to down Russian weapons.

But strikes in some areas continue to cause deaths and havoc, particularly in areas close to the front lines in the east and south.

During a previous round of Russian volleys on Dec. 5, more than 60 of 70 strikes were intercepted by air defense systems, including nine out of 10 targeting the capital and the surrounding region, Ukrainian officials have said.

Mr. Zelenskyy pressed Western leaders as recently as Monday to provide more advanced weapons to help his country in its war with Russia.

The Patriot would be the most advanced surface-to-air missile system the West has provided to Ukraine to help repel Russian aerial attacks in the war between the countries that erupted with Russia’s invasion of Ukraine on Feb. 24.

U.S. officials also said last week that Moscow has looked to Iran to resupply the Russian military with drones and surface-to-surface missiles.

Separately, the International Atomic Energy Agency said that it has agreed with Ukraine to “establish a continuous presence of nuclear safety and security experts” at all of the country’s nuclear power plants as part of efforts to prevent a nuclear accident during the conflict.

The plant, Europe’s biggest nuclear power station, has faced repeated shelling and is the biggest cause of concern.

There are three other plants in Ukrainian-held territory, as well as the decommissioned Chernobyl plant.