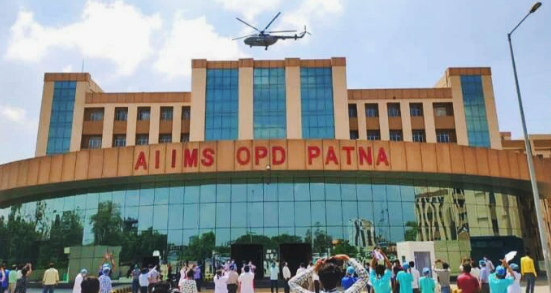 Sanitation Workers and Nursing Staffs on Strike in AIIMS Patna

Due to non-payment of Salaries for the past two months, Sanitation workers and nursing staff of All India Institute of Medical Sciences (AIIMS) Patna went on strike on Saturday to protest, raising a serious matter as this will interrupt the treatment of Coronavirus patients.

Among the four hospitals chosen for the treatment of COVID-19 patients in the state, AIIMS Bihar is one of them with leading super specialists assigned particularly for treating COVID-19 patients.

The families of the workers are not allowed to admit themselves for the treatment of COVID-19, despite them working tirelessly day and night which is also a matter of concern. According to reports, the hospital is used for the treatment of VIP patients including businessmen, politicians, MLAs, MPs, judges etc.

Isolation wards and ICUs with Ventilators are used by them. Common people are in a panic as they don’t know where to go and are denied treatment in the hospital, according to local media.

Opposition leader of Bihar, Tejashwi Yadav blamed Chief Minister Nitish Kumar for the mismanagement of health facilities during the pandemic and also hiding a genuine number of patients. He says that the government to prove its efficiency doesn’t at all reveal the exact amount to the media and people.

“In Bihar, the highest single-day surge of 2,226 new cases, with a positivity rate of 21.7% (highest in India), was recorded. To avoid making it to the headlines, the Chief Minister hid the actual figures and published half another day,” Tejashwi said.

“Nitish Ji is playing with the lives of 12.6 crores Biharis. To avoid bad press, he is suppressing data. Is your image more important than the lives of our people, Mr Chief Minister?” he questioned adding further.

Meanwhile, the number of cases of Coronavirus patients has doubled in the last 10 days, Bihar’s collapsed healthcare is at the question of everyone. As per official data available with the state Health Department, on July 8, there were 13,274 positive cases in the state, which then rose to 24,967 cases on July 17. Going by these numbers, on an average, about 1077 new cases have been reported each day.