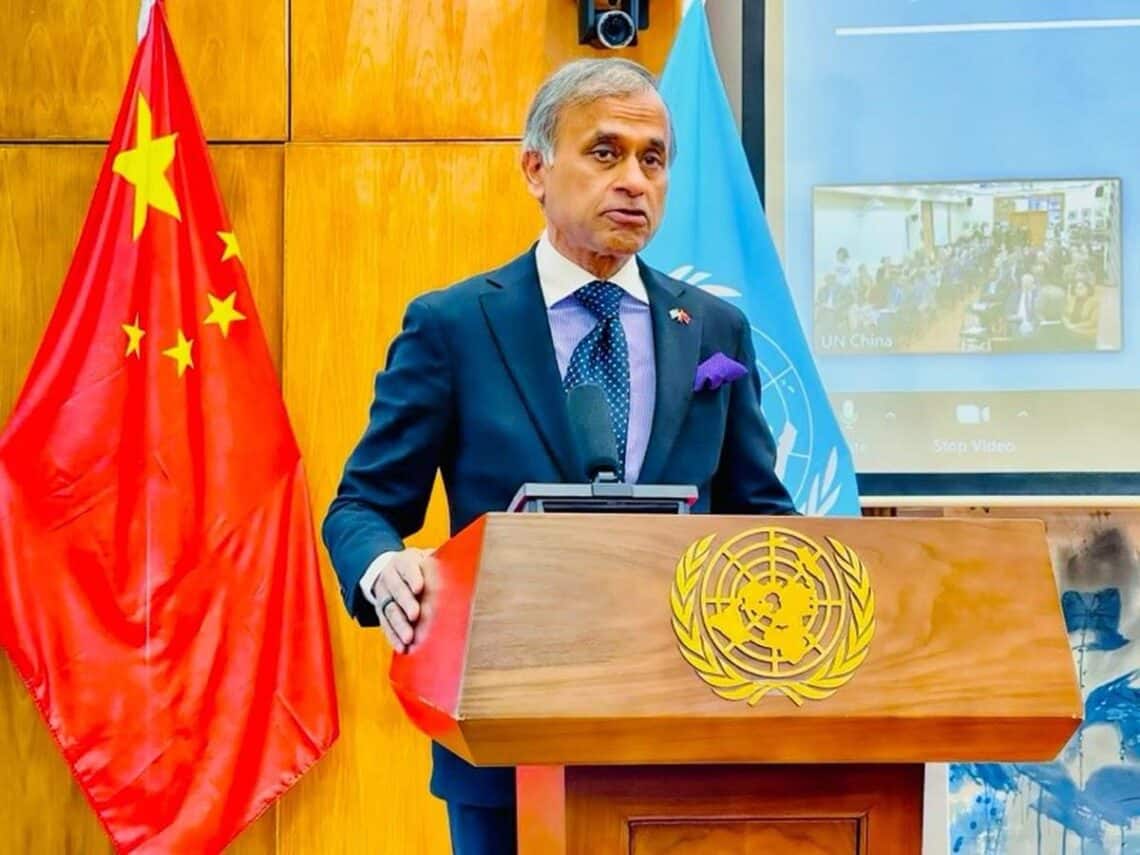 In his job, Mr. Chatterjee engages every day with senior Chinese Communist Party officials and assists China in achieving its development targets

In his job, Mr. Chatterjee engages every day with senior Chinese Communist Party officials and assists China in achieving its development targets

An Indian military officer who fought for the Indian Peace Keeping Force (IPKF) in Sri Lanka and battled insurgencies in Nagaland now finds himself helming a different kind of mission: leading the United Nations and its 26 agencies in China.

Siddharth Chatterjee’s rise to becoming the U.N. Resident Coordinator for China — one of the agency’s key global positions given Beijing’s rising importance in the U.N. system — leaves a former Indian soldier in an unlikely position — the equivalent of a former PLA soldier guiding the U.N.’s agencies in India.

In his job, Mr. Chatterjee engages every day with senior Chinese Communist Party officials and assists China in achieving its development targets.

In an interview, the National Defence Academy (NDA) graduate and former 10 Para special forces officer said he was himself surprised by how his military past did not matter to his Chinese hosts, either when he applied for the UN position in China or during the course of his work in the country, which happened to coincide with the worst period in India-China relations in decades following the tensions along the Line of Actual Control (LAC).

When the China vacancy came up, Mr. Chatterjee was in Kenya in 2020, and expected to continue working in Africa, where had previously also been posted in Darfur in Sudan, Somalia, and in South Sudan.

“I doubted it was possible,” he said, “but throughout the process, and in my stint here, my background has never been an issue. The Chinese have said to me, we see you as an international civil servant, and their attitude has been completely professional. Even after 25 years in the UN system, I found this to be exceptional”.

In his second year in China, Mr. Chatterjee said he has “seen first hand” the successes of China’s development experience, which he believes holds lessons for the developing world.

“Growing up in a family of humble origins, I know first hand the importance of good governance,” he reflected. His father was a refugee from Bangladesh who settled in Kolkata. When he was just three, he contracted polio. Schooling was a painful experience.

“I was looking at hopelessness in the face,” he said. Then came the National Defence Academy, which he credits with turning his life around.

Joining the elite 10 Para special forces, he was deployed with the IPKF in Sri Lanka in 1987. That was a second turning point that “shattered the myth of the glamour you associate with being a soldier and showed the grim reality”.

“Nobody was convinced of the mission,” he said. “When the first bullet flies and you see your first death, everything changes. It showed me what we are capable of as human beings – we can make the finest tech and innovation, yet there is a flip side, a dark and malevolent side”. Another stint battling insurgency in Nagaland, where he was decorated for gallantry in 1995, did not do much to change his disillusionment.

The former officer remains immensely proud of the Indian military and his unit. But at that time, he wanted a change. When the chance came in 1997 to work as a junior security officer for the UN in Sarajevo, he grabbed it. So began a UN career, starting at the system’s lower levels in rank. Postings in Baghdad followed, and after playing a key role in humanitarian operations in Iraqi Kurdistan, he moved to Africa.

In South Sudan, he was involved in working to release child soldiers in 2000. In Darfur in 2004 he met his wife Ban Hyun-Hee, who is now posted with UNICEF in India and is the daughter of former UN Secretary General Ban Ki-moon of South Korea.

In China, Mr. Chatterjee said his role is to help China achieve the Sustainable Development Goals (SDGs). In his two years in the country, he has marvelled at its socio-economic progress.

“China’s ability to lift over 750 million people out of abject poverty in four decades is an inspiration,” he said. “I’ve travelled to remote parts of China, and I see the transformation. As I experienced in my childhood, poverty is multi-dimensional, it’s about access to services, access to water, access to education. There are many other countries which had a head start over China if you look at the 1979 per capita GDP of China, there were countries in Africa and Asia that had a higher per capita GDPs.”

He pooh-poohs the argument that China’s experience cannot be replicated elsewhere because of its political system. “Using your political system is a lame excuse for not lifting your people out of poverty,” he said. “Some of the measures they took were investing in health, education, liberating women to join the workforce, so much so that the labour force participation became higher than most of Europe. You had a whole generation of children that were better educated, better nourished and healthier. China reaped a demographic dividend. It all starts at the micro level, at the household level. When a child is malnourished, and misses out on essential micronutrients in the first five years of life, the child will not have the intellectual or cognitive skills to be employable”.

The U.N., he said, has “walked with China” since 1979 in its development journey when the reforms process began. “We at the U.N. need to transmit this knowledge for other economies still struggling with poverty, to leapfrog as they have done,” he said. “They have shown pragmatism, and embracing ideas from outside. They have demonstrated that when political will, good public policies and the right partnerships converge, dramatic transformation happens.”

If that was true in the past, China under Xi Jinping has more recently pushed back against what it sees as any external criticism. Only in August, Beijing slammed a report from the Office of the UN High Commissioner for Human Rights (OHCHR) that concluded that “serious human rights violations” were committed in Xinjiang where hundreds of thousands of Uighurs have been forcibly interned. UN agencies have also faced flak for not speaking out more forcefully on human rights issues in China.

“Of course, there are difficult conversations to be had,” Mr. Chatterjee said, “but in any country, not just in China, these happen behind closed doors. The role of the UN is not to stand there and criticise, in China or in any other country, but to work with countries and do what we can to make things better. Human Rights is work in progress throughout the world, without exception.”