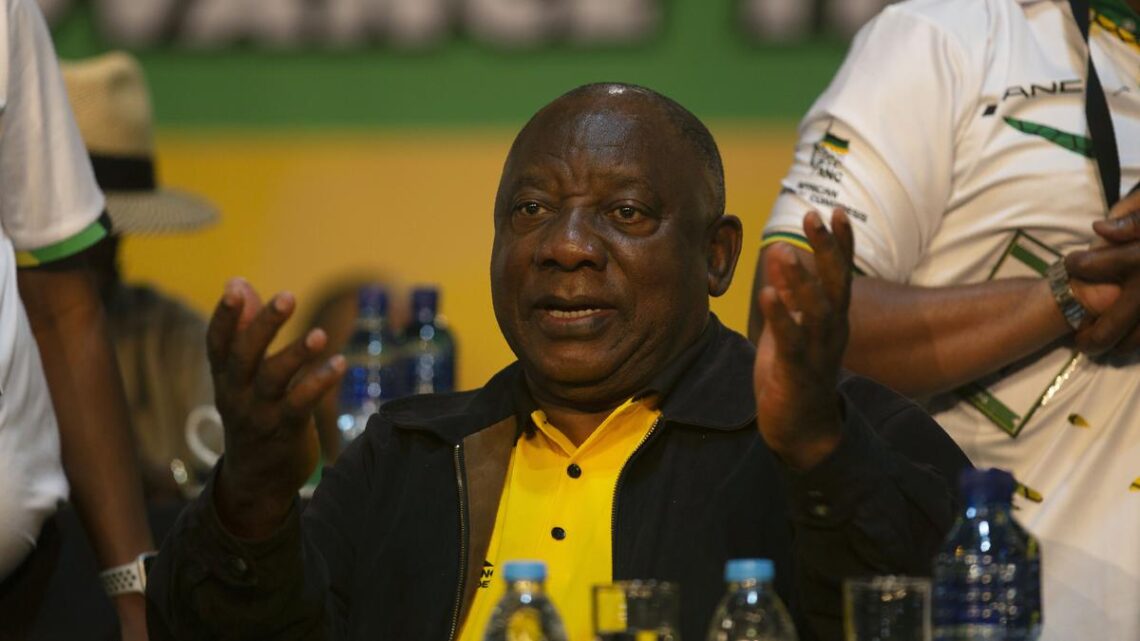 
African National Congress (ANC) President Cyril Ramaphosa gestures as he is re-elected as president of the organisation in Johannesburg, on December 19, 2022
| Photo Credit: AP

South African President Cyril Ramaphosa has been reelected as the leader of the ruling African National Congress party.

Mr. Ramaphosa beat his rival, former Health Minister Zweli Mkhize by 2,476 votes to 1,897 votes from a total of 4,386 votes cast by party delegates from across the country.

Mr. Ramaphosa’s supporters burst into celebrations as results were announced Monday at the ANC’s crucial leadership conference in Johannesburg.

This comes as a welcome victory for Mr. Ramaphosa, who has been mired in a scandal and facing calls to step down as president of the country and to be replaced as the leader of the ANC.

Last week he survived a vote to start impeachment proceedings against him over a parliamentary report that said he may have broken anti-corruption laws by keeping undeclared sums of dollars at his farm and failing to declare their theft.

Mr. Ramaphosa’s victory paves the way for him to run for reelection to a second term as South Africa’s president in the national elections in 2024.

The crucial ANC conference has been marked by bitter divisions and scandals surrounding Ramaphosa, Mkhize and other leaders.

With crippling nationwide power cuts of more than 7 hours a day, an unemployment rate of 35% and widespread reports of corruption, Ramaphosa and the newly elected ANC leadership have many challenges to address as the party heading the government and the legislature.

Mr. Ramaphosa also pledged that his government would continue to fight corruption, even as he was embroiled in a graft scandal.

Mr. Ramaphosa has been facing calls to step down from his position over a damning parliamentary report that said he may have broken anti-corruption laws by hiding undeclared dollars in cash at his Phala Phala farm. The report questioned the source of the funds and why did not report it to the police.

Mkhize was forced to resign as health minister over a scandal in which his family was found to have benefitted from a government contract.

Although the race was closer than expected, Ramaphosa did manage to increase his margin of victory from the very narrow 179 votes he won by in 2017. This time Ramaphosa won by 579 votes.

Also, two of Mr. Ramaphosa’s main critics within his Cabinet were decisively sidelined. Cooperative Affairs Minister Nkosazana Dlamini-Zuma, who last week voted in parliament in favor of impeachment proceedings against Ramaphosa, declined a nomination to run for ANC president. Tourism Minister Lindiwe Sisulu, an outspoken critic of Ramaphosa, appeared isolated at the conference.

“Sisulu entered the presidential campaign as a woman who wanted to be president. She leaves it as someone who made serious miscalculations,” opined the Daily Maverick news website. “We believe a Cabinet reshuffle in 2023 is imminent.”

Despite Mr. Ramaphosa’s win, the ANC remains deeply divided. Former President Jacob Zuma leads nearly half of the party that is opposed to Mr. Ramaphosa and his anti-corruption drive. Defeated presidential candidate Mkhize has emerged as the public head of that faction.

“Mkhize won the backing of 43% of delegates, in part by promising plum posts to party powerbrokers. The results underscore that Ramaphosa faces substantial opposition within the ANC,” said Aleix Montana, Africa analyst at Verisk Maplecroft.

Oscar Mabuyane, who lost the contest for the position of ANC deputy president, said he is happy with Ramaphosa’s victory.

“This win is not only for the ANC perspective or a faction. It is for the country,” Mabuyane told The Associated Press.

Political analyst Hlengiwe Ndlovu said Ramaphosa had failed to unite the party after he was elected in 2017 and would need to do something more this time around.

“Even though he was promising unity, he never unified them,” said Ndlovu. “Instead, all we saw were widening divisions and factionalism. It will be interesting to see what he will do differently this time.”

Some delegates said that Mr. Ramaphosa deserved a second chance and called for the unity of the party despite delegates having supported different candidates.

Mandilakhe Kondile, a delegate from the Eastern Cape province, said Ramaphosa deserved another chance as the leader of the ANC.

“It is our strong belief that Mr. Ramaphosa was not given enough time to make meaningful changes, he had only led for five years,” said Mr. Kondile. “Now it is a second chance for him to deal with the issues facing South Africans and to unify the African National Congress.”

According to the ANC vote, Mr. Ramaphosa’s deputy will be Paul Mashatile, the party’s outgoing treasurer-general. The party reelected Gwede Mantashe to another term as national chairman.

Transport Minister Fikile Mbalula was elected as the party’s new secretary-general and his deputies will be Nomvula Mokonyane and Maropene Ramokgopa. The party’s new treasurer-general is Gwen Ramakgopa.