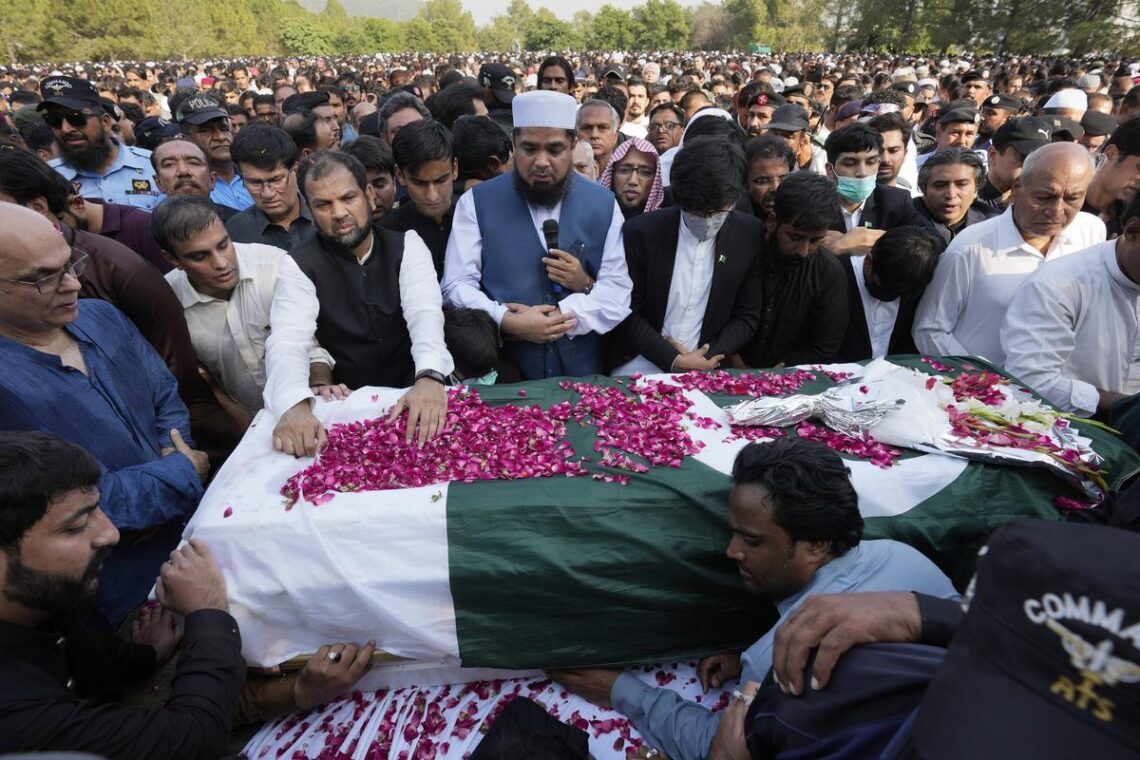 The funeral at Islamabad’s main mosque drew up to 40,000 mourners.

The funeral at Islamabad’s main mosque drew up to 40,000 mourners.

Tens of thousands of mourners attended the funeral Thursday of a Pakistani journalist shot dead by police in Kenya after he fled arrest in his home country.

Arshad Sharif, a strident critic of Pakistan’s powerful military establishment and supporter of former premier Imran Khan, died when Kenyan police opened fire on his car at a roadblock outside the capital at the weekend.

Sharif had fled the country in August to escape sedition charges, and his death triggered widespread speculation in Pakistan that he was targeted for his views.

Kenyan officials say Sharif’s death was a case of mistaken identity as officers thought they were firing on a stolen vehicle involved in an abduction.

The funeral at Islamabad’s main mosque drew up to 40,000 mourners, according to police at the scene, with people spilling into the gardens and surrounding streets.

Many media figures attended, but supporters of Khan’s Pakistan Tehreek-e-Insaf (PTI) party made up a large proportion of the crowd, waving flags and chanting “Arshad, your blood will bring revolution”.

“Arshad Sharif sacrificed his life to expose the faces of the corrupt and we should not let that sacrifice be for nothing,” said Muhammad Iqbal, a 35-year-old shopkeeper and PTI supporter who had travelled from the neighbouring garrison city of Rawalpindi.

Samina Qureshi said PTI supporters came “to vent our anger against the military which has manipulated politics throughout”.

After prayers, coffin bearers struggled to push through the crowd to a waiting ambulance for onward passage to a graveyard.

Prime Minister Shehbaz Sharif on Wednesday ordered an inquiry into the killing, only for a senior intelligence official to withdraw from the panel hours later.

Arshad Sharif fled the country days after interviewing opposition politician Shahbaz Gill, who said junior officers in Pakistan’s military should disobey orders that went against “the will of the majority”. The comment led to the news channel being briefly taken off the air and an arrest warrant for Sharif.

Gill was detained following the interview, and Khan’s criticism of the judiciary over the detention led to his own appearance in court.

Pakistan has been ruled by the military for several decades of its 75-year history and criticism of the security establishment has long been seen as a red line.

It ranks 157 out of 180 countries in a press freedom index compiled by Reporters without Borders, with journalists facing censorship and intimidation.

The Human Rights Commission of Pakistan said the establishment had “a long, grim record of violent tactics to silence journalists” and Sharif’s killing had “sent shock waves through the journalist community”.