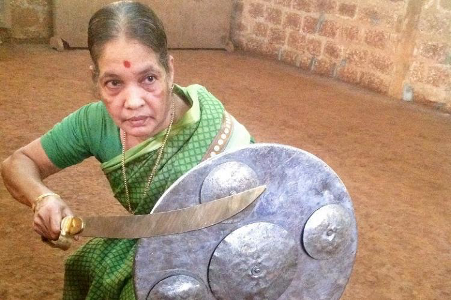 Meenakshi Gurukkal crouched low, sword poised; her eyes unblinking as she faced her opponent in the mud-paved arena. From the tree tops, a mynah’s call resonated in the silence. In a flash she moved to attack, swirling her sword; metal clashing loudly as it made contact with a shield.

The 74-year-old Meenakshi Gurukkal, often called Unniarcha or a legendary warrior of Kerala’s north Malabar ballads, performs a feat that any prize fighter half her age would gives his arms to achieve.

The ancient martial art form of Kerala, Kalaripayattu, is not a forte of women. But wedded to her art, the oldest woman exponent of the martial art has been imparting kalari lessons for more than six decades.

Whether it is a spear, sword, wood rod or a long steel whip called ‘urumi’, the sari-clad wisp of a woman handles all with the dexterity of a 16-year-old.

Her dedication and skills fetched her a Padma Shri, the country’s fourth highest civilian award, this year.

She was in the midst of two-dozen children in her  place where the art is performed in Kozhikode district’s Vadakara when the news of the award came. Unmoved, she came out of the kalari only after finishing her classes.

“With the country bestowing this honour on me, I feel humbled and it makes me more responsible. I will try to attract more youngsters to the art,” she said.

She called the award a tribute to the ancient martial art form believed to be the predecessor of karate and kung fu.

“I dedicate this to my late husband Raghavan Master who took me to the world of kalari, considered a male bastion then,” Gurukkal said.

At present, more than one-third of her students are girls aged between six and 14. Classes are free and her only income is ‘guru dakshina’.

However, at times some of her old students also loosen their wallet generously. Many approached her to start a commercial institute but, rooted to the ground, she declined.

She started learning kalari at a young age of six. “My father was a martial art exponent and he gave me the first lessons. I was practising classical dance and kalari simultaneously. Many asked me to give up kalari and concentrate more on dance, but my passion remained with the former,” she said.

The real break came when, at the age of 18, she married Raghavan Master, her father’s favourite student.

There was no looking back since. She has lost count of students who came out of her school Kadathnadan Kalari Sangam. On average, 150 students graduate from her school every year.

“In kalari, the first lesson is ‘mey vazakkam’ (attain flexibility with ground exercise). Then practice starts with wooden rods that lead on to practice with weapons. Finally, we train them to defend without weapons,” she said.

The guiding principle of the martial art is defence not offence.

The grand dame of Kalaripayattu now wants to include kalari lessons in schools.

“Kalari is a medicine. Besides giving fitness, it boosts confidence. In the backdrop of atrocities against girls, it will be good they are taught some good self-defence techniques,” she said.

OMKAR IN DANGAL ANCHOR IN GENERAL