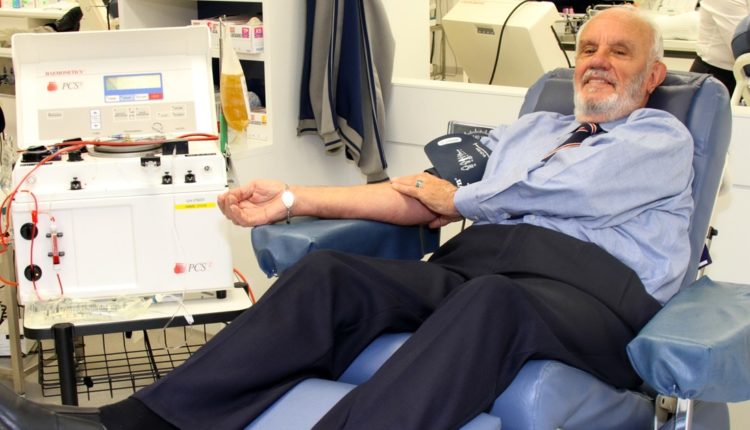 Not all heroes need capes! Do they?

Every once in a while you come across someone who is extraordinary, someone who has a heart of gold, someone who can touch lives and make them infinitely better.

One such hero is 81-year-old James Harrison from Australia who has saved 2.4 million infant lives in his whole lifetime. He has donated blood a whopping 1,172 times. For this reason, he is fondly called as ‘the man with the golden arm’.

At the young age of 14, Harrison had to get one of his lungs removed. He had to go through numerous blood transfusions during the procedure.

One would think after such a traumatic experience at such a young age, the man would have forever sworn off needles and hospitals, let alone donating blood. But this is the difference between an ordinary person and a great one – it was this very trauma that made James Harrison become a regular blood donator. He decided to help others and despite his dislike for needles, he went on to donate blood 1,172 times in his life.

From the age of 18, he began donating blood – a habit he ritually followed over the years. After over a decade of donating, it was discovered that his blood was rare – researches found the presence of a rare antibody called Rho(D) or anti-D in his blood.

The antibody is produced in women who have Rh-negative blood and an Rh-positive foetus – the phenomenal is called Rh incompatibility. The antibody in the mother’s blood can prove fatal for the baby when it attacks the child’s cells as an immune reaction. This antibody, that can also save the lives of babies, was found in abundant quantities in Mr Harrison’s blood.

The cause of his rare blood type is not certain but it is speculated that he could have received a wrong blood type during his blood transfusions. In such cases, the person often develops the antibody Rho(D) as an immune reaction.

And so, the man kept donating his blood without fail, till the age of 81, for now, he is well over the limit recommended by doctors. He recently donated his blood plasma for the last time, after doctors suggested him to stop donating for he was too old to be a donor now. The man now holds a Guinness World Record for his noble contribution.

Here is a man who literally saved lives with his blood, and yet Mr Harrison is humble enough to dismiss it as something that was easy to do.