What started as a dispute over the succession of the last Islamic Prophet has today, became the basis of crime. Islam with 1.9 billion of its population in the world, is the second-largest religion practiced in the world, which is now facing the biggest sectarian division which may regrettably result in cannibalism.

On 11 September 2020, thousands of people took over the street of Karachi in anti-Shia demonstrations that led to massive violence. People were shot straightaway, women thrashed and every physical violence possibly happened. After the protest, twitter saw the #ShiaGenocide hashtag.

“Since the start of Muharram, we have seen numerous Shia believers targetted for reciting religious scriptures and partaking in Ashura commemorations. This demonstration should not be taken lightly when our brothers and sisters are being kidnapped and killed for their beliefs”, Afreen, an activist tweeted. She believes that Prime Minister Imran Khan should be held accountable for this pathetic condition of Shias in Pakistan.

This is extremely worrying, and this is a strong indication that there will be further sectarian violence in the country. pic.twitter.com/3p44xE5Qsf

Taking a wider perspective, Islam is built upon two pillars- Monotheism and the acceptance of Prophet Muhammad as the last messenger of God.

The latter resulted in the creation of two sects when the death of the last Prophet in 632 AD led to the dispute over the succession of the Prophet as a Caliph of the Islamic community. One group, which is identified as The Sunnis believed Abu Bakr and Umar to be the successors while the other group, later identified as Shias, believed that Prophet’s successor should be Ali.

The dispute intensified greatly after the Battle of Karbala in which Hussein Ibn Ali was killed by Yazid and the outcry of revenge further divided the Islamic community.

Also Read: Moharram And Azadari: The Historical Context Of The Mourning As We See It Today

Although all Muslims believe Qur’an to be divine, Sunni and Shia have different opinions and beliefs about practices, traditions, customs, and Hadith. These belives have grown so much so that the sects have two different calls for prayers.

In the medieval period, there have been some accounts of clashes between the two sects but it still managed to remain safe and peaceful. The Anti-Shia violence started in the past 300 years with the two aspects-Shiaphobic literature and hate-crimes.

Shia versus Sunni power struggle has always been a crucial and primary reason for the deviation. For example, after the death of Aurangzeb, Shia elites tried to play politically and the Sunni elite used the sectarian polarisation to undermine the Shia elites.

The organized physical violence started on April 21st, 1802 when a group of people sacked the city of Karbala, killed thousands of Shias, and vandalized the holy shrines. This encouraged the pioneers of anti-Shia terrorism.

The violence went so far that in 1940, a Deoband terrorist attacked a religious procession (Ashura) of Shia with a bomb.

It was not only religious bodies or figures who were using this division for their profit but this also seen as a political opportunity when Congress used the sectarian card against Jinnah, who was Shia. The more Congress supported the religio-fascist ulema, the more it alienated and more, the League became popular.

With some hurdles and struggles, a Muslim nation was formed with the name of Pakistan with a serious Sunni-Shia discord. About 80% of Pakistan’s population is Sunni and the rest is Shia. Despite the fact that the country is a Sunni majority, many Shia figures were elected at the top offices for example Asif Ali Zardari, Muhammad Musa, and Yahya Khan among others.

The 1979 execution of President Zulfiqar Ali Bhutto (Shia) by Gen. Muhammad Zia-ul-Haq (Sunni) marked the beginning of the persecution of Shias in Pakistan. From 1987-2007 as many as 4.000 people died in sectarian fighting in Pakistan with 300 in 2006 alone. Anti-Shia Groups were formed which demand the expulsion of all Shia from Pakistan and killed hundreds of them. From January to May they executed as many as 75 Shia community leaders in an attempt to remove Shia from authority.

In 2012, the leading Shia members of Pakistan received anonymous text of “Kill, Kill, Shia.” Later, a suicide bomber hurled the grenade into the Shia Procession killing 23 people in Rawalpindi.

Thus, the history itself speaks about the State’s role in Pakistan’s Anti-Shia hysteria. The recent anti-Shia demonstrations in Karachi raise questions about the possible involvement of the national establishment. Pakistan is on the genocide of the Shia community. In August alone, there were 42 blasphemy cases, targeting Shias including a 3-year-old child.

There have been numerous rallies in past weeks that primarily targeted Shias. The demonstrators took over Karachi’s major highways. The leading demonstrations include Muneed-Ur-Rehman, chairman of the government-affiliated Ruet-e-Hilal Committee. While claims are made to only upheld the sanctity of the Prophet and not to target any sect, there were lots if unabated echos of ‘Shia-Kafir’ heard clearly. Bizzare threats like Sunnis could “behead people” who blasphemed against their personality were made by Abid Mubara, Karachi Chief of TLP. Some other Sunni Islamists used a rather rhetoric tool to demand expansion of murderous blasphemy law, taking care of not mentioning the word ‘Shia’ in their speeches at demonstrations.

It is to be noted that while Pakistan is at the top in persecuting Shias, the genocide prevails in Balochistan, Afghanistan, India, Yemen, China, and many more.

Dr. Abbas Zaidi, doctor of philosophy at UNSW, Sydney proposes a model to map the altruistic genocide. According to him, the genocide can be explained in ecological terms as an all-inclusive concept. The ecology of genocide includes the post-traumatic lives of survivors and the additional new stages of genocidal history. It means that the notion should be studying phenomenologically. 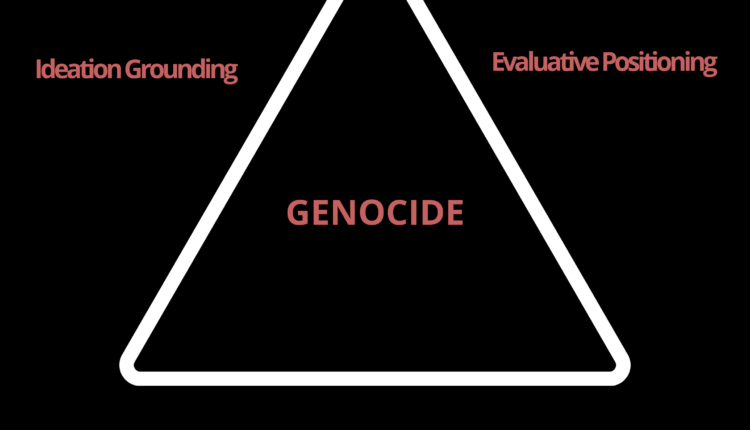 The Ideation Grounding refers to the provenance of a genocide instance. The violence seeks its justification in some actual or perceived historic incident. For example, the division of the sects is 1400 years old. The justification for the violence is based upon the claim that the Shias insult some companions of the Prophet which arose from the Caliphate issue. It is interesting to see that Shias are killed not because they have any disagreements from other Muslims over the fundamentals of Islam rather because they do not accept the legitimacy of some companions.

Evaluative positioning is one of the ways that positions the victims in denial of genocide. It says no genocide has taken place either by straightaway declining the killing or by disassociating the killing with hate speech and associating it with some other random cause. Another position is to create twisted axiology. The conflict is split into binary Sunni-Shia Conflict in Pakistan. But if we take a deeper look, the genocide is carried out by Deobands making up to 20% of the Sunni population.

Thematic representation in a genocidal campaign foreground the victims’ beliefs and practices and post them hostile to and incompatible with those of tormentors. For example, the basic five pillars of Islam are followed by both Sunnis and Shias, but they are still given a thematic foreground of ‘blasphemous’.

What it takes for a victim to live in an ecology that encourages genocide? What it’s like for a Shia to live in a society where the walls have graffiti of  “Kafir, Kafir, Shia Kafir“. What is it like to cross streets having mosque’s speakers shouting Fatwas that Shias are blasphemers and enemies of Islam, Jewish agents, and Wajib-ul-Qatal? What does the world mean for Shias where their haters publically justify Shia Killing by declaring them apostate and heretics without state invoking any law? What would be the world for a Shia who has to survive the attacks but are left physically incapacitated? How does their mind function after escaping death? The children living in a society where they are traumatized for their identity daily.  How do they handle their dissociative identity disorder? What future dreams do they have? What about families who lost their loved ones? How do they act out their lives socially, economically, and psychologically?

There is some serious and legitimate question arising today that need to be answered because it is clear that unlike in history, people are awakening and are getting aware of what is the truth and what is taken as a tool of power.

Noticed the Orange Dot on your Updated iPhone Screen? Read what it means amongst other fresh updates in the latest Apple iOS 14

Patriarchy: An Arsenal to Misogyny in India