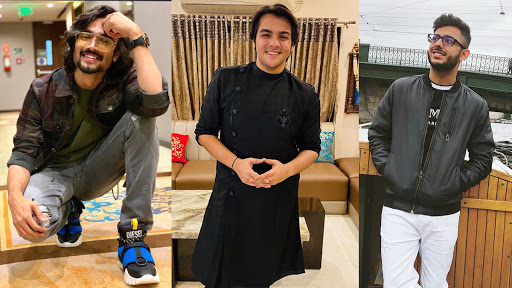 Here is a list of top 05 YouTubers in India. Youtube is a fruitful land for many internet users and has become a permanent work for many people.

YouTubers have now taken full advantage of tricks to earn views and money and to get famous worldwide. Especially after the 4G launch in India, the traffic on YouTube is highly increased. With the easy availability of smartphones, everyone has open access to youtube to create or watch the content of their preferences.

Here is a list of Top 5 YouTubers from India-

Ajay Nagar has his channel by the name CarryMinati. He also has a separate gaming channel named “CarryisLive” with 72.6 lakh subscribers where he streams his live gameplay mainly PUBG. An avid gamer, Nagar posted his first youtube video when he was 10 years old and hasn’t looked back since then.

The content he produces consists mainly of roasting user-generated content that is spreading on all major social media platforms. He kept on receiving both kinds of comments from his users hate and love however his youtube popularity is such that he ended up interviewing Tom Cruise and Henry Cavill.

Amit Bhadana is the first Indian YouTuber to have gained 20 million subscribers. He is a comedian and has created content with many Bollywood stars including Akshay Kumar, Ajay Devgn, among others. His videos are funny and with his local language he has taken over the hearts of India’s young population.

Ashish Chanchlani is one of India’s funniest YouTubers. He became famous when his video “ How to annoy people who say — tu mere baap ko janta hai” went viral. He also appeared in Alt Balaji’s Class of 2017 web series. He has also made a lot of videos on Indian’s and their weddings and cute fighting relation between brother and sister.

Bhuvan Bam is the highest-paid content maker on YouTube in India. BB Ki Vines has over 1.86 Crore subscribers on YouTube now. His content on Youtube is estimated to be exciting, creative, and funny. Most of his videos have a high number of views and trends for days even after days of launch.

He started his career as a singer in bars of New Delhi and went on to become a most popular YouTuber because of his sense of humour and originality.

He has also won an award for the “Most Popular YouTube Channel.” To add to that, he also won “Global Entertainer of the Year” in 2019. He is popular among youth for his fluency in sarcasm and abuses, and for producing content that most of us can relate with. He was the first one to be invited at Davos to attend the World Economic Forum’s annual meeting. His video about the plight of poor workers in India who were affected the most by lockdown in Covid 19 was so heart touching.

With 1.64 crore subscribers on YouTube with over 120 million views he is 3rd on the list.
Sandeep Maheshwari is a well-known name in every top Indian YouTubers list and the CEO of imagesbazaar.com

He is a motivational speaker and an entrepreneur, who started his career as a freelance photographer. Later, he joined a marketing firm. What makes him more authentic as a motivational speaker is a fact that he has seen many ups and downs in life himself.
He holds a limca record of photography and has got many awards.
He often conducts seminars across the country which are attended by thousands of people- all free of cost! His seminars on YouTube or otherwise have helped many crestfallen youths.

So, here was a list of top 5 YouTuber’s from India who are worldwide famous and are earning a good amount from youtube.

Read: Who is the richest actor in the world? Top 10 list.