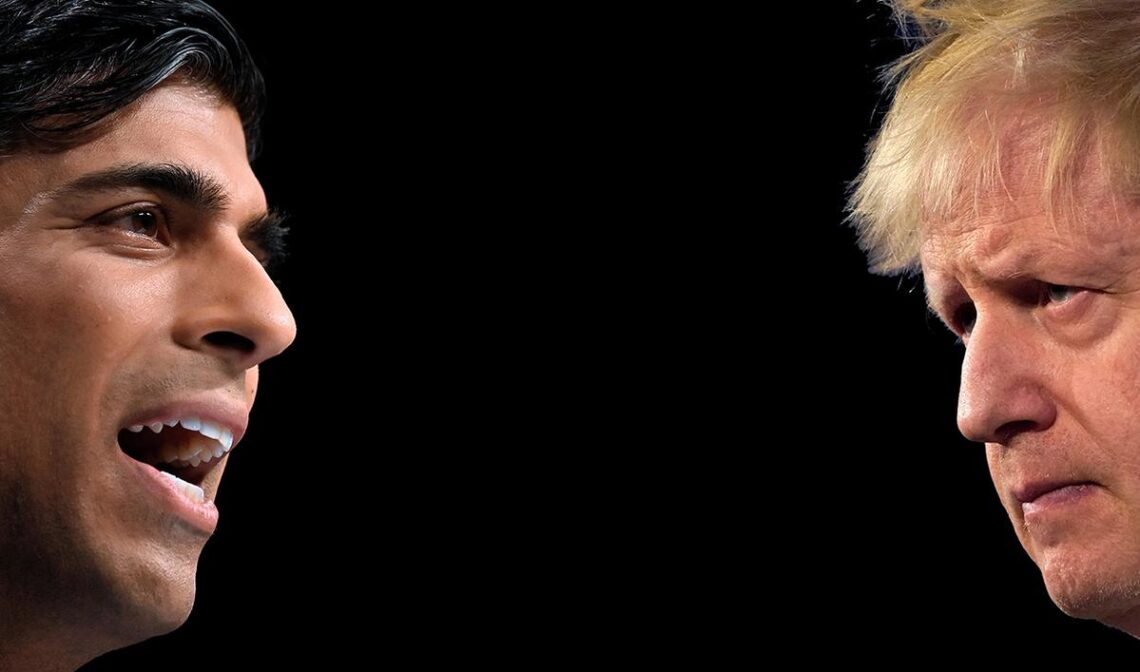 
Conservative rivals Boris Johnson and Rishi Sunak held face-to-face talks late on Saturday, reports said, as the feuding pair who once headed Britain’s government were poised to battle for the leadership of their fractured ruling party.

Former Prime Minister Johnson, who returned from a Caribbean holiday earlier in the day aiming to launch an audacious political comeback just weeks after leaving office, met ex-Finance Minister Sunak to discuss the race, the BBC and others reported.

Both are yet to declare they will run to replace outgoing leader Liz Truss, who announced on Thursday she would stand down — just 44 tempestuous days into her tenure.

It is thought to be their first in-person discussions in months, following a spectacular falling out after Mr. Sunak’s July resignation helped trigger the government mutiny that ultimately prompted Mr. Johnson’s ousting.

Few details have emerged about what The Sun dubbed a “secret summit” and the Sunday Times said was ongoing at close to 10:00 p.m.. The Sunday Telegraph reported they were set to discuss “agreeing to a joint ticket” to avoid a Tory “civil war”.

That implausible scenario comes as Mr. Sunak races ahead in the count of Conservative MP nominations to be the next leader, with the 42-year-old easily securing the 100 minimum threshold set by the party to contest the UK’s top job.

He has the public backing of 128 Tory lawmakers, compared to Mr. Johnson’s 53 and 23 for cabinet member Penny Mordaunt, who was the first to formally declare, on Friday.

Mr. Johnson cut short a luxury stay in the Dominican Republic to join the seemingly three-way tussle, with allies saying he was “up for it”.

The divisive 58-year-old Brexit architect only relinquished power in early September, two months after announcing his resignation following a government revolt over a slew of scandals.

The Tories have now been forced into a second, this time expedited, leadership contest since the summer after Ms. Truss resigned following her disastrous tax-slashing mini-budget sparked economic and political turmoil.

In a sign of the toll from the tumult, ratings agency Moody’s said Friday it had downgraded Britain’s outlook, blaming in part “heightened unpredictability in policy making”.

Meanwhile, the pound — which hit a record low against the dollar in the mini-budget’s immediate aftermath, but had since rallied — slumped.

Mr. Johnson’s apparent bid to reclaim power has already been decried by opposition politicians, and even some in his own fractured ruling party who are demanding stability and unity.

“It is simply not right to risk repeating the chaos (and) confusion of the last year,” said David Frost, a right-wing formerly loyal minister appointed to the House of Lords by Mr. Johnson.

“We must move on,” he urged the Tories, adding they “must get behind a capable leader who can deliver a Conservative programme” who he identified as ex-Finance Minister Sunak.

Meanwhile in a major coup for Mr. Sunak, Trade Minister Kemi Badenoch, an influential right-winger, said in a Sunday Times article that “he would be a great leader during a time of crisis”.

The accelerated contest will see the Conservatives’ 357 MPs hold a vote on Monday on any candidates with the 100 nominations, before a possible online ballot of party members later in the week if two remain.

Tory MP James Duddridge, a key Johnson ally who confirmed Friday the ex-leader was intent on standing, said on Saturday that he had now secured the support of 100 colleagues.

But the claim was met with scepticism by other Conservatives, with one MP telling the BBC it was “hogwash”.

Meanwhile, posting a photo of Mr. Johnson on the phone to his Facebook, backbench Conservative MP Lee Anderson revealed he was backing him after “a long chat about everything past and present”.

“My inbox is full of BBB (bring back Boris),” he said, referring to an acronym and hashtag used by his supporters.

Although he remains popular with party members who could decide the contest, polling shows he is broadly disliked by the electorate, with a YouGov survey finding 52 percent opposed his comeback.

Another poll also found three in five voters now want an early general election, in line with demands from opposition parties, as Britons struggle with a worsening cost-of-living crisis.

ISRO’s heaviest rocket with 36 satellites on board lifts off