Sports and anime may not appear to be closely related, but these are the 10 best sports anime that will inspire viewers to get in shape. 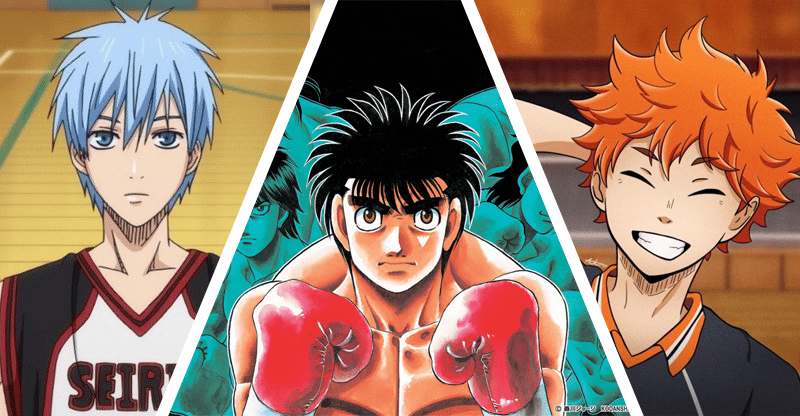 Although Japanese anime films are most known for their science fiction, the genre embraces much more than huge robots and fantasy. Sports series are one of the most diversified genres in anime. In this post, we have compiled a list of the best sports anime to watch.

These episodes are thrilling and action-packed, with some of the most intriguing storylines ever told in the genre. In this article, we are going to discuss some of the best sports anime to watch for an exciting experience. The majority of sports anime is classified as Shnen, an anime and manga genre aimed mostly at young males and teenagers. Shen is known for various things, including its blend of action, comedy, and tragedy, as well as a courageous protagonist with a never-say-die mentality.

There are few stories that adapt better to anime than those that revolve around sports. Every sport imaginable has been put up on television screens in a Japanese animation manner, from common sports like baseball to those with smaller limelight like bowling.

Few, however, can compare to the shows that have been dubbed “all-time greats” by both fans and reviewers. Some shows are so well-liked that they’ve moved beyond just being good sports stories and into the realm of “greatest anime of all time.”

There are dozens upon dozens of excellent sports anime series available, many of which have crossover appeal, meaning that fans of one program are likely to enjoy another. We have curated a list of the 10 best sports animes to watch below. Some of these shows are available to watch on Netflix or Hulu, while others are only available on DVD.

Check Out Our List Of The 10 Best Sports Anime To Watch, Choose Your Pick:

This is the anime equivalent of Rocky Balboa. The boxing adventure of its main character, Ippo, is highly inspiring, despite the fact that it follows a traditional fight-of-the-week formula throughout its runtime. Another feature that distinguishes Hajime no Ippo is the predictability of its boxing battles.

No matter how hard a viewer tries to predict how the anime’s bouts will end, the anime always surprises them, much like boxing does in real life. It went on to become one of the best sports anime to watch.

This basketball show is an anime classic that every NBA fan should watch. The story follows freshman Sakuragi Hanamichi, a delinquent who joins the Shohoku High School basketball team in search of a girl named Haruko, who is a passionate basketball lover. Despite being a complete novice in the sport, he demonstrates exceptional talent.

Slam Dunk was crucial in popularizing basketball as a sport in Japan. The basketball action in this anime is deliciously old school and amusing for any basketball lover nostalgic for that era, as it was released in the 1990s.

Although a volleyball anime may appear to be an unusual premise for an exciting program, Haikyuu!! is one of the most popular anime series of all time. The story follows Shy Hinata, a tiny child with incredible leaping abilities who is driven to become Japan’s best volleyball player.

While there is a lot of action in this anime, there is also a lot of emotion. The show does a fantastic job with character development, giving the plot tremendous emotional depth. Which makes the series one of the best sports anime to watch.

4. Run With The Wind

Unlike most anime adaptations of manga, Run with the Wind is based on a novel. The show is about competitive running, as the title suggests. However, it dives deeply into the mental catharsis of its hero, Haiji, in addition to the typical storyline surrounding the advancement of its major players in their sport.

Kuroko’s Basketball will keep you on the edge of your seat whether you’re a basketball or sports fan. The adventures of “The Generation of Miracles,” a bunch of high school basketball geniuses, are the focus of this Japanese anime. This series’ basketball action is one-of-a-kind and best defined as “superhuman.”

Each of the major characters has a special basketball skill, such as the ability to disappear while dribbling or never missing a shot. Every season is jam-packed with action, with growing basketball competitions that ensure a thrilling ride for every NBA fan.

One Outs barely feels like it belongs in the genre, despite the fact that very few sports anime are solely about their chosen sport. One Outs is a gambling anime that has more in common with Kaiji and Akagi than with Ace of Diamond and Big Windup!

It is a gambling anime that features baseball instead of poker. It’s also a great deal of fun. If you want to watch a fun sports anime One Out is the pick for you.

7. Ace Of The Diamond

Baseball is extremely popular in Japan. As a result of its popularity, there has been a slew of baseball-themed anime over the years. Ace of the Diamond, based on the true story of Eijun Sawamura, a high school baseball pitcher with an unorthodox pitching method, is one of the greatest.

The anime follows the young hero as he strives to be the best baseball player in the world. Although there is a lot of stress in this anime, it is also quite humorous, with a strange cast of characters.

8. The Prince Of Tennis

Many fans consider this series to be the best tennis anime of all time. Ryouma Echizen, a tennis prodigy who has returned to Japan after dominating the American tennis scene, is the hero of The Prince of Tennis. Ryouma’s ambition is simple: to become Japan’s greatest tennis player.

He does so by enrolling in Seishun Academy, which has one of Japan’s most prestigious middle school tennis programs. The plot revolves around Seishun Academy’s desire to win the National Tournament, which pits them against a number of formidable opponents.

9. How Heavy Are The Dumbbells You Lift?

Though How Heavy Are The Dumbbells You Lift is an ecchi anime focused on fan service and “bro-science” humor, it may not be to everyone’s taste. Hibiki Sakura, a gluttonous high schooler, is the series’ central character.

When her growing girth becomes a source of concern, she decides to make a change and joins a gym. But, in order to stay on track, she must overcome tremendous and often humorous obstacles at every turn.

Cheer Boys!! Because the story takes place in college rather than high school, you may anticipate more mature characters and a genuine depiction of their cheering experience. Haruki Band was born into a family of judo martial artists and has always been expected to carry on the tradition. However, after injuring his shoulders during training, the disheartened college freshman begins to consider attempting something new.

Kazuma Hashimoto, a boyhood buddy, has an unusual idea: forming an all-male cheerleading squad. They abandoned their respected judo club roles and began recruiting members for the team together.

It is available to watch on Amazon Prime.

Some of the best sports anime to watch are mentioned above. We hope you like this article. Please give us your feedback in the comment section below. Also, let us know about your favorite sports anime.

How To Reset Home Pod Mini (With or Without iPhone)