Weekend movie marathon: 7 engrossing movies based on real-life on Netflix that you can finish off in just 15 hours

These 7 engrossing movies can save your weekend from turning boring, without making you step out of your house. Stay home and keep binging!

by Ayushi Kharayat
in Entertainment, Infotainment, Listicles
Reading Time: 6 mins read
A A 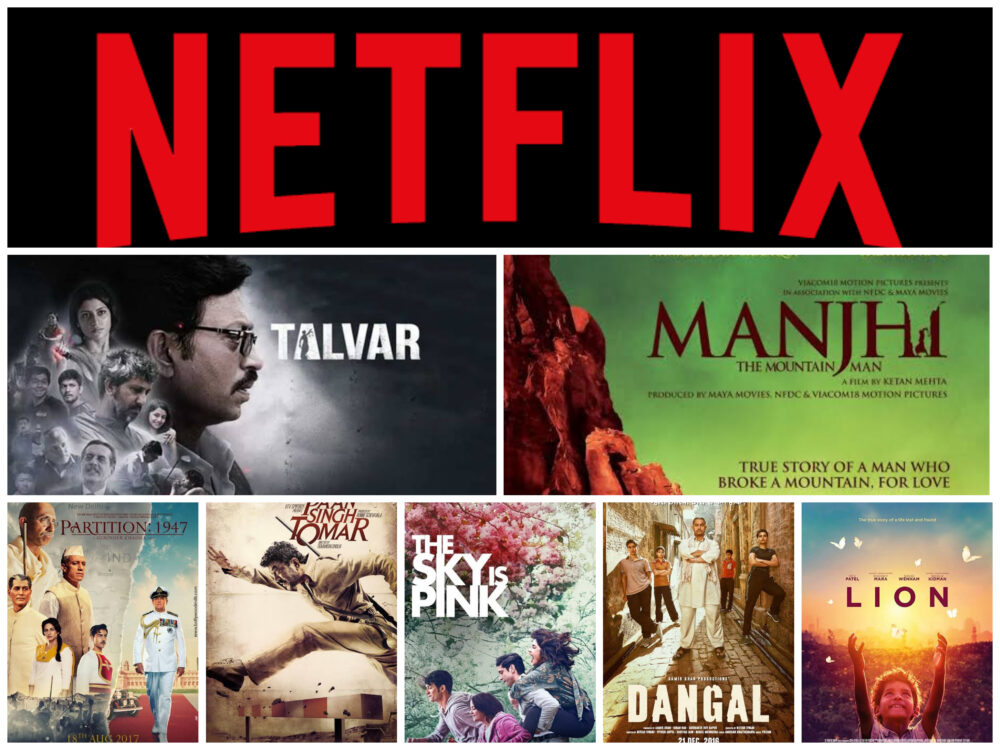 One more rushed week passes by and you’re at present getting a charge out of those valuable two days to pull together and recover before the following week rolls along. What better approach to do that by gearing up for marathon watching probably the best movies based on real-life events and people to occupy yourself from all that is going on.

So here are our seven best films that you can finish in just 15 hours.

After abandoning his own dreams of becoming a world-class wrestler, Mahavir Singh Phogat puts all his hopes on his unborn son, only to feel disappointed when he gets four daughters instead. However, when he sees the potential in his daughters, he exploded his regressive mindset and goes against society to coach them in wrestling. His motivation and therefore the diligence of his daughters gave India two of its most badass wrestlers – Geeta and Babita Phogat. Directed by Nitesh Tiwari, the movie features Aamir Khan, Zaira Wasim, Sanya Malhotra, Sakshi Tanwar, Fatima Sana Shaikh and Aparshakti Khurrana among others.The movie is only 2 hour 40 minutes long and available to watch on Netflix.

This movie is predicated on the lifetime of Paan Singh Tomar, who was once a celebrated national level athlete, but later became one among the foremost feared and notorious dacoits in Chambal Valley. Starring Late Irrfan Khan within the titular role, the film narrates the events that turned him into a rebel against the country he once made proud. Tigmanshu Dhulia’s vision and therefore the brilliant performances by the cast earned this movie a National Award for Best feature in 2012. The movie is only 2 hour 8 minutes long and available to watch on Netflix.

Directed by Ketan Mehta, featuring Nawazuddin Siddiqui in the lead role along with other supporting artists like Radhika Apte, Pankaj Tripathi, Jagat Rawat and more, the movie traces the journey of Dashrath Manjhi, a resident from Gehlaur close to Bihar’s Gaya, in this motivating film dependent on his life and his unprecedented mission. Otherwise called the “Mountain Man”, Dashrath Manjhi spent decades (exactly 22 years) doing back-breaking labour to make a road that might connect his village to the closest town, using just a hammer and a chisel. The movie is only 1 hour 58 minutes long and available to watch on Netflix.

Taking inspiration from Saroo Brierley’s novel, ‘A Long Way Home’, Lion is roused by Saroo Brierley’s life and therefore the journey he set on to reunite together with his biological family in India. The story follows a five-year-old who after separation from his family gets adopted by an Australian couple. Years later, he looks for help from technology to seek out his family. The movie features Dev Patel, Priyanka Bose, Rooney Mara, Nicole Kidman, David Wenham, Deepti Naval, Sunny Pawar and Nawazuddin Siddiqui in prominent roles.The movie is only 1 hour 58 minutes long and available to watch on  Netflix.

Directed by award-winning director Meghna Gulzar and written by Vishal Bhardwaj, Talvar is a crime mystery spine-chiller based on the real-life 2008 double murders of Arushi Talwar and her house assistance. The film describes how the police and the CBI direct the examination cycle, while the needle of doubt focuses on the young girl’s parents as prime suspects and the public outrage keeps on building up. This gritty drama packs a powerful cast and an excellent screenplay that got Vishal Bhardwaj a National Film Award for the film. Talvar highlights Konkana Sen Sharma, Neeraj Kabi and Irrfan Khan among others. The movie is only 2 hour 12 minutes long and available to watch on Netflix.

Otherwise called the Viceroy’s House, the story is set during the time of India’s partition in 1947. The film narrates the events that happened before partition and therefore the developing clash among Hindus and Muslims, from the viewpoint of Lord Mountbatten, the last viceroy of India. At the focal point of this distress is a youthful Hindu man working for Lord Mountbatten, who falls for a Muslim young lady and their struggle to reunite with one another. Directed by Gurinder Chadha, this biographical drama features Huma Qureshi, Hugh Bonneville, Gillian Anderson, Manish Dayal and Om Puri among others. The movie is only 1 hour 47  minutes long and available to watch on Netflix.

Produced by Priyanka Chopra Jonas’ Purple Pebble Pictures, The Sky Is Pink is predicated on the true story of writer and motivational speaker, Aisha Chaudhary. She died at a youthful age in the wake of experiencing serious immunodeficiency and pneumonic fibrosis. The movie chronicles her life and her family, beginning from the time her parents met one another, their romance to how the family sets forward a valiant battle against Aisha’s disease. The movie features Priyanka Chopra Jonas, Farhan Akhtar, Zaira Wasim and Rohit Saraf in prominent roles. The movie is only 2 hour 23 minutes long and available to watch on Netflix.