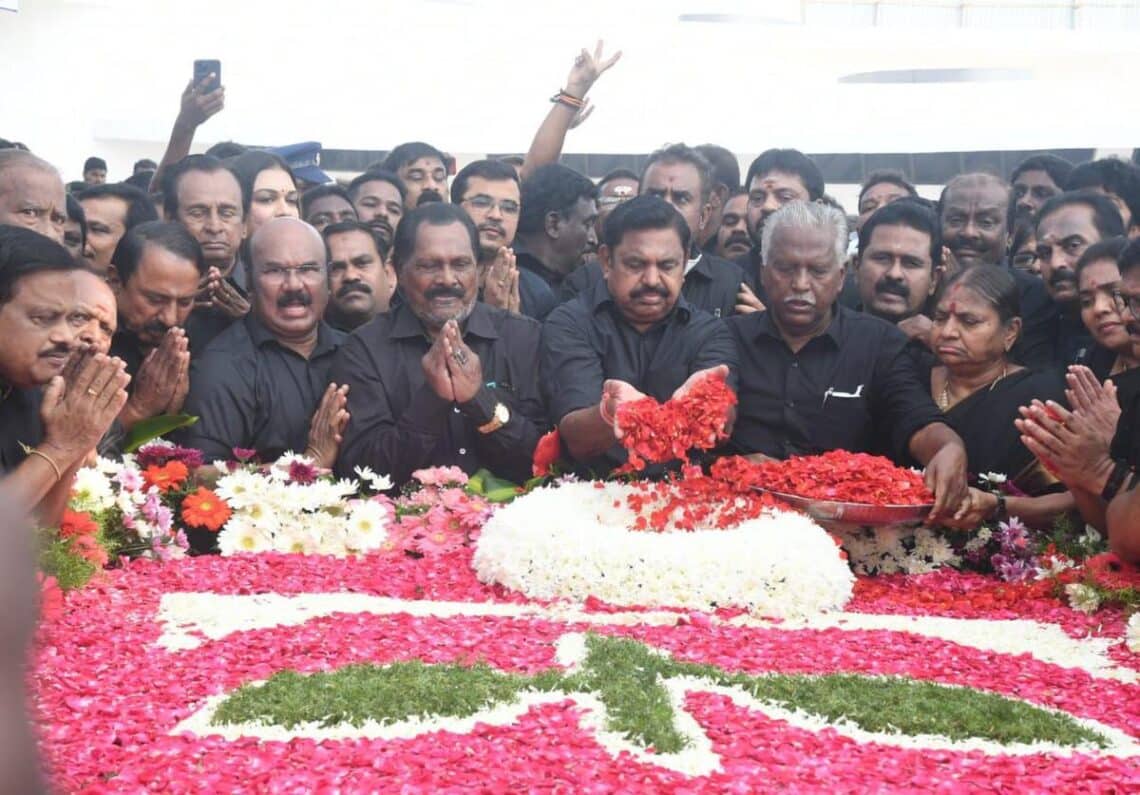 The sixth death anniversary of former Chief Minister J. Jayalalithaa was observed on Monday, with the interim general secretary of the AIADMK, Edappadi K. Palaniswami, and deposed coordinator, O. Panneerselvam paying homage at her mausoleum at the Marina beach, separately.

Mr. Palaniswami later left for New Delhi to attend a meeting, to be held on Monday evening, comprising leaders of different parties in connection with India assuming the presidency of G-20 countries.

Administering a pledge before senior leaders and members of the party, the AIADMK interim general secretary, along with other leaders such as Tamilmagan Hussain and K.P. Munusamy, called upon them to strive for the return of the party to power. Apart from political adversaries, “traitors” would be crushed. For the Lok Sabha election, a “mega alliance” would be formed, he said. Leading a procession of his supporters, Mr. Panneerselvam, accompanied by leaders including J.C.D. Prabhakar, R. Vaithilingam, K.P. Krishnan and V. Maitreyan, also vowed to bring back the organisation to power. He and others also pledged that the “dictatorial approach” as demonstrated in eliminating the party’s rule of having the leader elected by all primary members of the party, would be brought to an end.

AMMK general secretary, T.T.V. Dhinakaran, who also paid homage, got an oath administered, in which a call was made for retrieving through the AMMK the organisation nourished by Jayalalithaa which had subsequently lost its “uniqueness and identity” due to the “selfishness” of one group.  The former interim general secretary of the AIADMK, V.K. Sasikala, also visited the mausoleum to pay her respects.

On the matter of G-20 presidency, Mr Palaniswami, in a statement, lauded Prime Minister Narendra Modi for his “hard work and friendly approach with world leaders,” which “enhanced the reputation” of the country, all of which made possible the assumption of the presidency by India. “It was a matter of pride and joy to attend the meeting, on behalf of the AIADMK,” the interim general secretary pointed out

Asked whether the invitation by the Union government to attend the meeting could be taken as a mark of the BJP’s support to Mr. Palaniswami, the party’s organisation secretary and former Minister D. Jayakumar, replied that there was no need to link an action of the Central government with the position of the ruling party at the Centre. “Had the BJP called a meeting and invited us for such a meeting, I can agree with your point,” Mr. Jayakumar explained.

Sugarcane growers’ agitation to continue as meeting with govt. fails to break deadlock