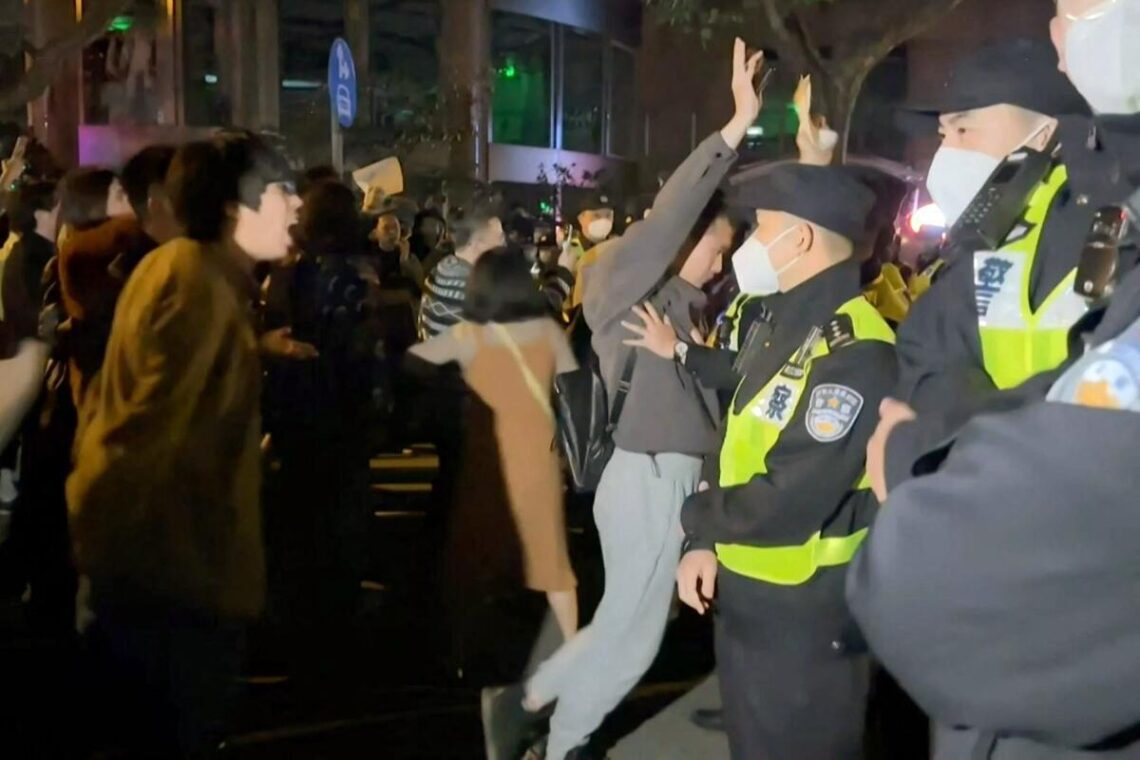 
Angry crowds took to the streets in Shanghai in the early hours of November 27.
| Photo Credit: AFP

Chinese social media and Twitter have many videos of public protests, including a mass demonstration in Shanghai where people in a rare display of anger shouted slogans against the ruling Communist Party of China (CPC) and President Xi Jinping.

Many protesters were reportedly being arrested.

There are also videos of protests from various university campuses where students came out in the open to oppose the lockdowns.

On Saturday, the government stepped back from enforcing lockdowns in Urumqi, the provincial capital of Xinjiang, where 10 people were killed and nine others injured on Thursday in a fire at an apartment block which was under COVID lockdown.

During the weekend, Urumqi witnessed a huge demonstration in which many Han Chinese nationals took part along with Uygur Muslims.

The footage of protests, which was later censored, showed hundreds of residents in a public square outside a government office, chanting slogans “serve the people” and “end the lockdown”, and singing the national anthem.

Other clips showed scuffles between residents and people in hazmat suits in the street.

In Beijing, people from several compounds, under lockdowns for days, also staged protests, leading to officials withdrawing the curbs.

Meanwhile, the National Health Commission on Sunday said 39,501 coronavirus cases, including 35,858 asymptomatic cases, were reported in the country by the end of Saturday as mass COVID tests were carried out across China to identify new clusters of infection.

It is for the fourth consecutive day that China reported an increase in cases, the highest since it recorded a sharp spike in cases in top cities like Shanghai in April.

The capital Beijing has been reporting a sharp escalation of cases, which on Sunday climbed to over 4,700, amid growing protests and unease in the city over lockdowns of dozens of apartment buildings.

As of Sunday, the city has 9,694 cumulative confirmed cases.

The State Council’s Joint Prevention and Control Mechanism, meanwhile, has reiterated its commitment to cracking down on COVID-19 control malpractices and urged localities to rectify improper implementation of the guidelines.

The mechanism said that some local governments have been found to either roll out overt measures such as ordering widespread lockdowns or take a lax attitude toward the disease, and both tendencies are wrong, state-run China Daily reported on Sunday.