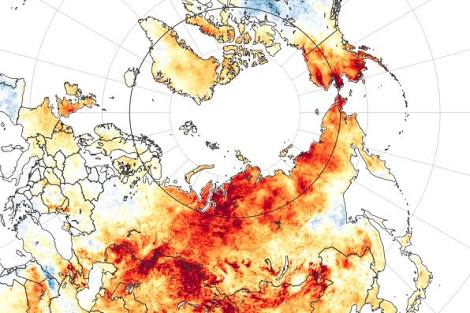 Temperatures are rising twice as fast in the Arctic than elsewhere on the planet, accelerating the decline of sea ice which in turn makes heating even more pronounce

In a small  Russian town of Verkhoyansk, a record high temperature of 38°C was recorded due to the Arctic heatwave according to BBC. Yet to be verified but this might be the highest temperature ever recorded in the arctic.

Elsewhere in the Arctic, the picture is even more concerning. Temperatures are rising twice as fast in the Arctic than elsewhere on the planet, accelerating the decline of sea ice which in turn makes heating even more pronounced. And as that ice retreats, it risks releasing vast amounts of greenhouse gases that otherwise would remain locked within the ground.

What is the cause of the Arctic heatwave?

The polar jet stream works on the principles of the temperature contrast between the colder arctic region and the warmer equatorial region. This rapid current of air high above in the atmosphere drags weather in a conveyor belt from west to east, with alternating patches of cold and warm air, low and high pressure. These jet streams have a fundamental effect on our weather but since the temperature contrast is shrinking due to global warming the flow of these streams gets stuck, which might have disrupted the circulation of hot wind rushing northward causing a heatwave.

Human-induced climate change is among one the primary causes of these frequent heatwaves in the arctic. Due to global warming, the average temperature of the Earth is increasing which has resulted in the melting of ice caps. Ice sheet cover allows most of the sun’s energy to be reflected, thus keeping the temperature cool,  but now with melting ice and darker soil being exposed to the sun more heat is being absorbed leading to increasing temperature in the Arctic.

What are the effects of the Arctic heatwave?

The heatwave in the Arctic has led to a thawing of the permafrost — the perennially frozen ground that underlies most arctic terrain.

As the permafrost thaws infrastructure builds upon these layers will be damaged. Last month the thawing permafrost near Norilsk, Russia,  was blamed for an oil tank collapse that spilt 21,000 tons of oil into a river, which is the biggest oil spill in the Arctic region. The environmental impact of this oil spill might take several years to be neutralized.
Another problem associated with permafrost thawing is the release of greenhouse gases that have been trapped in those layers. When the ground thaws, microbes in the soil begin turning their organic matter into carbon dioxide and methane. Both are the greenhouse gases, and will further speed up global warming. This is a less obvious but more lethal problem.
Wildfire in the Arctic region is another matter of grave concern. As the extreme warmth also raise the risk of wildfires. Drier forests are more prone to fires, often from lightning strikes. When forests burn, the dark, exposed soil left behind can absorb more heat and hasten to warm.

Mark Parrington, a senior scientist and wildfire expert at the European Union’s Copernicus Atmosphere Monitoring Service said, “We have seen satellite observations of active fires that hint that ‘zombie’ fires might have reignited,”.

These wildfires will have estimated emissions of approximately 50 million tonnes of greenhouse gas thus leading to an increase in the surrounding temperature. The immediate impact of these wildfires and heatwaves can be witnessed in ice covers on the shores of Siberia where big areas of open water can be seen in the satellite images that would normally still be covered. The sea ice extent in the Laptev Sea, north of Russia, is the lowest recorded for this time of year since satellite observations began.

The consequences of the heatwave in the Arctic is not just a local geographical crisis but a ‘Global Warning’ about the future of the planet, and these climate changes are a clear indication that our priorities need to be rearranged.