Under the new legislation, anyone who has resided in the contested region for 15 years can purchase land and become a resident.

When the entirety of India was experiencing lockdown, yet another law was imposed on the inhabitants of Jammu & Kashmir. The March 31st Order, which amends 138 state laws, is the latest in a slew of legislative changes taking place since the abrogation of Article 370, including the Jammu and Kashmir (J&K) Reorganisation Act, 2019 and the J&K Reorganisation (Adaptation of Central Laws) Order, 2020.

The new piece of legislation substitutes the term “permanent residents” with “domiciles” of J&K. Its direct effect on the former permanent residents of J&K is that they are no longer automatically eligible for government jobs and educational opportunities in the region. There are also expectations that land ownerships, voting right and other welfare benefits that are previously reserved only for J&K permanent residents may now be extended to anyone who successfully obtains a domicile certificate.

Under the new law, who can claim to be domicile?

What are the rules to obtain a domicile certificate?

Residents of J&K who live outside the erstwhile State can get domicile certificates by simply producing their Permanent Residence Certificate (PRC), ration card copy, voter card, or any other valid document. Those migrants not registered with the Relief and Rehabilitation department can do so by providing documents such as electoral rolls of 1988, proof of registration as a migrant in any State in the country, or any other valid document. There is a provision to get the certificate online too.

Official records reveal that the government has received 33,157 applications for domicile certificates in J&K and over 25,000 people have been granted the citizenship certificate as of now.

Navin Kumar Choudhary, a senior J&K cadre IAS officer from Bihar, is among the nearly 25,000 people who have been granted a domicile certificate, a photo of which has recently been floating on the internet that brought a fresh controversy to the fore. 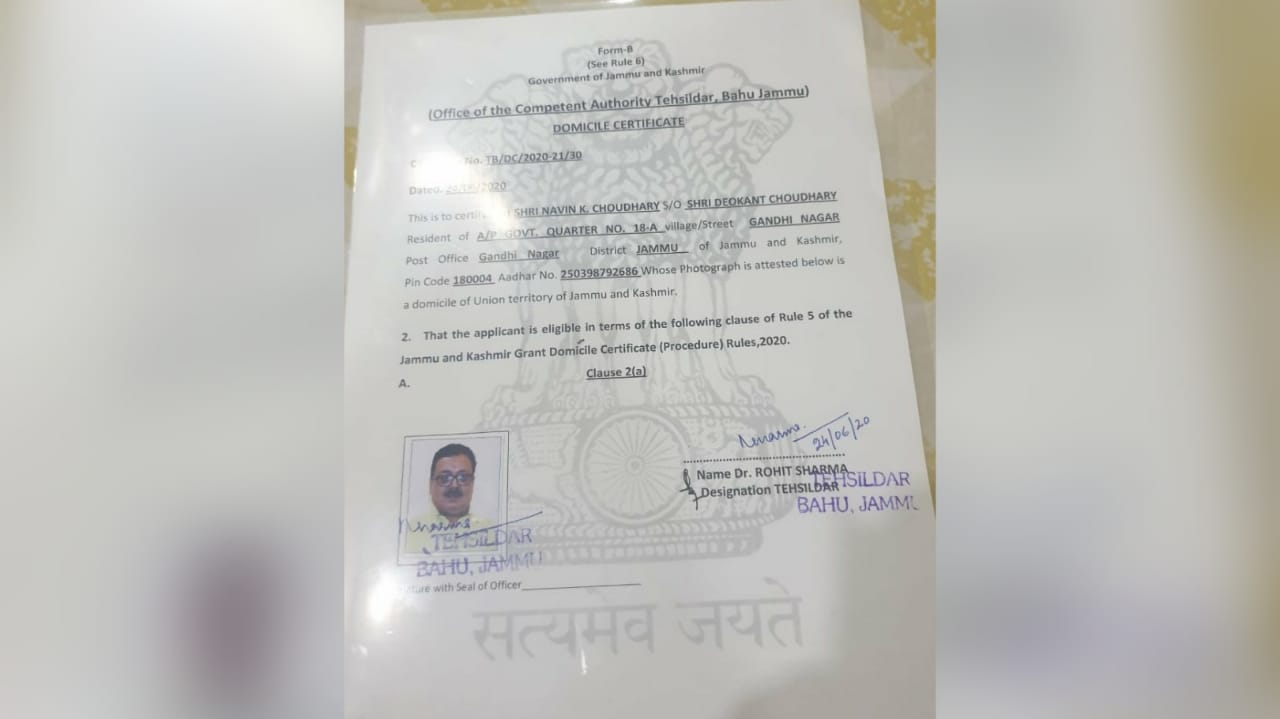 “This is to certify, Shri Navin K Choudhary son of Shri Deokant Choudhary resident of at present Gandhi Nagar Jammu is a domicile of UT of J&K,” reads the domicile certificate issued by Bahu Tehsildar

Out of 66, top bureaucrats serving in the region, 38 are outsiders belonging to other Indian states. Many other outsiders serve in various central government institutions like banks, post offices telecommunication facilities, security institutions, and universities.

The new rules now grant domicile rights to Indian soldiers, bureaucrats, and officials – along with their families – that are stationed in J&K or who were previously deployed in the restive state. An estimated 6,00,000 to 7,00,000 Indian military and paramilitary personnel are deployed in Kashmir at present. The move allows another estimated 6,00,000 migrant laborers from India to qualify for domicile rights.

“How cruel the law is for the people of J&K, when it paves the way for a person, from anywhere in India, having studied here for 7 years or so, to claim domicile? Is it possible for a student studying in other states to have a similar stake there?” said the Jammu & Kashmir National Conference (JKNC), adding that the central government is starting a “domicile dole-out mela in J&K”.

“If you compare it with the north-eastern state of Assam, [where the ruling Bharatiya Janata party] BJP [government] wanted every application to be scrutinized by officers,” Parvez told Al Jazeera, referring to the state where nearly two million people were left out of a 2019 citizenship list.

“The government has already warned those who oppose will have to go to jail.” Parvez said people were not in support of the law but cannot oppose “under the pressure of gun and state violence”. The central government seems to be deciding the fate of 8 million people with the stroke of a pen.

The new [domicile law] has already been under the pipeline but what adds salt to the wound is the deliberately chosen timing of the law, so that there be no outcry on the streets.

“The whole world is busy with combating coronavirus and they are implementing these laws. They are confident that in this situation there will be no protest. The timing is very important,” Parvez Imroz, a human rights lawyer at the Jammu and Kashmir Coalition of Civil Society, told DW.

“Obviously it is an attempt to change the demographics. Not only change but flood it. It will lead to demographic flooding,” Kashmir-based political analyst Siddiq Wahid told the Al Jazeera news network. Echoing similar views, Mirza Saaib Bég, United Kingdom-based Kashmiri lawyer noted that under the new domicile processes, if Kashmiri fails to meet the new criteria – whether by malice, manipulation or by the design of the new rules – revoking residency rights will inevitably lead to their involuntary transfer from Kashmir in search of shelter and employment. “All these initiatives have sparked fears of demographic change, militarised settlements, dispossession, and alienation of land in Kashmir,” he said.

The people’s democratic party (PDP) urged the Centre to recognize the “fallacy” of its actions in J&K and reverse its “communally driven agenda” and see the “pain” that it has caused to people of the erstwhile state “as it threatens to hurtle the entire region into an era of unending instability.”

The party said that it will resist the policy by democratic and peaceful means. It said the COVID-19 pandemic was not a deterrent for the Centre to continue with its project to disempower J&K and that the demographic change and disenfranchisement will further complicate the J&K issue.

The new law has been met with strong backlash for reportedly promoting senior-level jobs to people throughout India while reserving low-level non-gazetted positions for Jammu and Kashmir domiciles, earlier, in their mandate which later got reformed by Ministry of Home Affairs after facing vehement criticism.

The concerns about domicile laws are not restricted to Kashmir alone but are also being raised in Jammu.

“Under the garb of domicile, outsiders will take away our jobs and our land. This is all a fallout of the abrogation of Article 370. First, the central government mentioned domicile in the reorganization Act, but did not define it properly for months, making residents unsure of their future,”  the Print quoted a Jammu-based advocate Anil Sethi, brother of senior local BJP leader Sunil Sethi.

“There is a strong rethink happening among those who supported BJP (ruling Bharatiya Janata Party) in Jammu. It is becoming clear it has tremendous risks for the youth” DW quoted Noor Ahmad Baba, a professor of political science-based in the region as saying that the new law “has definitely angered people” and warned it will have serious side-effects at both the local and global levels.

Is Kashmir another Palestine in making?

Drawing similarities with Israel’s use of residency laws to disenfranchise and dislocate Palestinians, the decision has been surmised by critiques as the center’s first step to reverse the Muslim-majority character of the region in the style of Israeli settlements in occupied Palestine.

Writing for digital media organization Newsclick, journalist Ajaz Ashraf and researcher Vignesh Karthik KR conclude that J&K’s demography is bound to be altered beyond belief. And at a speed so astonishing that the procedure for issuing a domicile certificate will seem, unfortunately, a quasi-colonial project.

‘Indian state functionaries themselves have spoken of this well-thought-out Israeli-style solution for Kashmir. It is certainly a settler colonialism project with tragic consequences for Kashmiris’