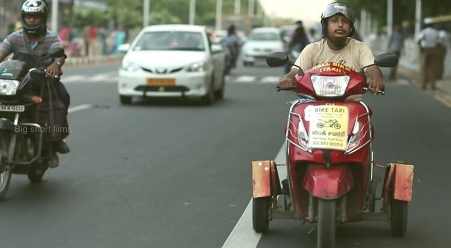 K Balaji is a 34-year-old BBA graduate, a corporate employee-turned-entrepreneur, who created and founded ‘Maa Ula’, a bike-taxi service in Chennai whose drivers are all differently-abled people. Maa Ula derives its name from the Tamil words, ‘maatru thirunaaligal’ which translates to ‘differently-abled,’ and ‘ula‘ meaning ‘journey’. After starting out on January 7, 2015, this service has received phenomenal success and everyone in the country seems to be talking about it.

At the age of 19, Balaji’s struggle to find a way to be independent began when he lost the use of his legs. He tried his hand in an office setting but he always felt like people were treating him differently. He quit his job and remained unemployed for a few years. In an interview with The News Minute, he said,

“I tried doing a corporate job but I was so unhappy. I would be dejected and cry all day.”

Balaji used to drop his yoga teacher home after the class every day. One day his teacher asked him why doesn’t he drop others like this and ask for a fare. That is when the idea struck to Balaji and ‘Maa Ula’ was born. Balaji was the service provider, but he was soon approached by Mohammad Gadaffi, the co-founder who proliferated the idea and encouraged others to join.

So far, Maa Ula is five people strong, all of whom have their own bikes. In an interview with MeriNews, he says, “My life changed after I began doing this. I am much more comfortable with myself. I want to make others like me feel this way too.”

Balaji and Gadaffi are planning to expand by up to 20-25 people by next January.