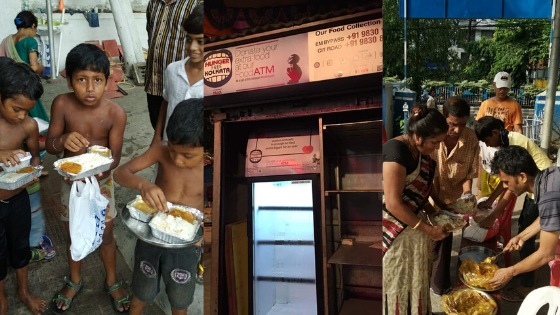 Kolkata being my hometown, I decided why not visit the place myself and find out what exactly made them come up with this superb idea? Tried my luck and guess what? I got to see the owner himself!

A quick talk with the owner of Sanjha Chulha, Atif Ahmad revealed so much about this initiative which otherwise I would not have known. On being asked how and when he came up with this thought, he said-‘ I have seen many people wasting food and even in my own hotel, almost every day I see so much of wastage and that always made me think how can we stop this wastage and can use this food for good. Now, I cannot reuse this food and hence me and my friends were discussing this matter and we came up with the idea of Food Atm! ‘

So what’s a Food Atm? It’s basically a fridge which had been installed outside their eatery and anyone who wishes to donate their leftover food can put it inside instead of wasting it. These people also have a donor list wherein they take a note of all the people donating food and in that way, they can keep a track of everyone. They have installed a camera as well which supposedly keeps a track of the amount of food so that accordingly they can donate it to the underprivileged people.

Where was this first installed? Sanjha Chulha currently has 5 outlets in Kolkata and one of the outlets is in Park Circus area of Kolkata. Near to this place, there is a slum, where often people go off to sleep even before having a square meal. So Atif decided to install this Food Atm in this chain first with proper measurements and an almirah attached to it as well.
All kind of costs for this particular initiative has been taken care of by the owner himself and he strictly opposes any kind of monitory help. They only accept help through kind and the companies which extend their help are mentioned in their pamphlets.

What were the challenges they faced? Everything has its own pros and cons. Similarly, these people faced problems too and the biggest challenge which they had faced is the donation of stale food.
However, they solved this problem beautifully. Remember that DONOR LIST which keeps a track of the people? Yes, that helped them understand who they need to notify and in that way, they kept their quality intact. 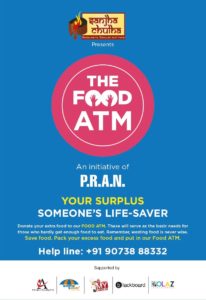 How are they expanding? Now, these guys not only limit themselves to their own eatery chains but also they have joined hands with a renowned school of Kolkata expanding as far as possible. Not only this, but they are also coming up with a food van which solves the problem for many people to come and donate food, making it convenient and easy!
This is a huge step towards removing mass starvation and slowly and steadily by taking such initiatives we can surely solve this problem which India is facing.

DADI KI RASOI IN NOIDA IS BREAKING ALL THE NORMS; GIVING FOOD AND CLOTHES AT RUPEES 5 AND 10!