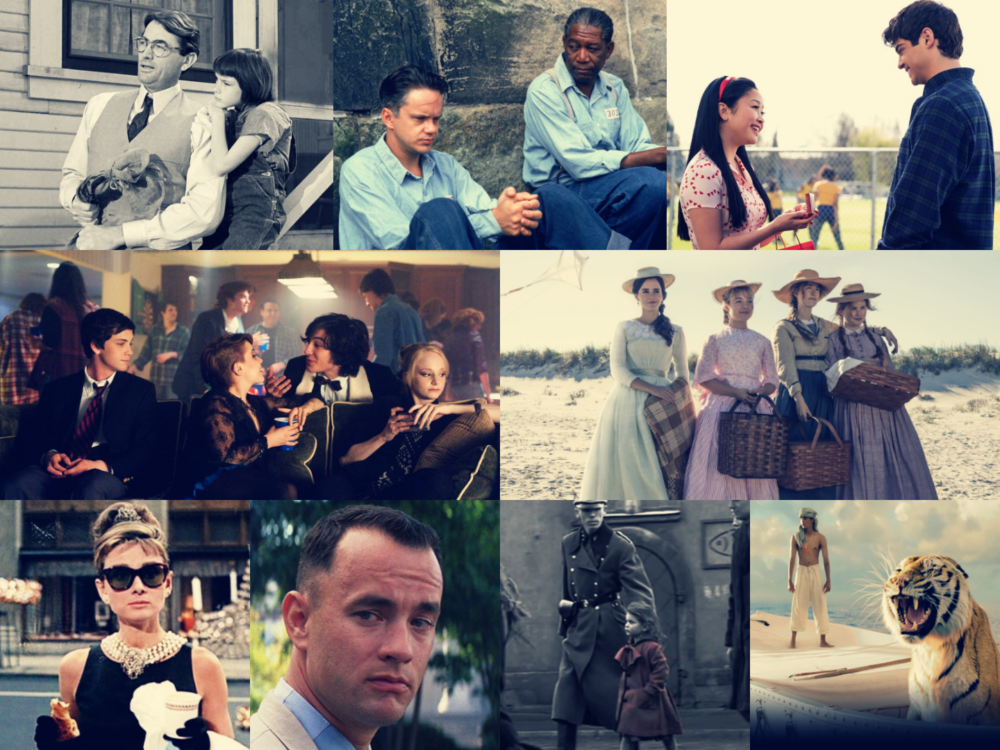 Several books have been adapted into movies. The tradition of book-to-movie adaptation has been happening for quite some time now. The directors and producers have a responsibility of presenting an equivalently creative and authentic movie adaptation which must do justice to the original source. A lot of these movies had been a great success and were nominated and awarded for the same.

Here, we bring to you 10 of the all-time favourite movies that are based on a book and are celebrated for their lively adaptation from the original source and also as a piece of art.

This 1962 Hollywood masterpiece is based on the Pulitzer Prize-winning novel of Harper Lee. The movie brings the character of Atticus and the mysterious Boo Radley into life. The classic takes us into the devastating truth of racial hatred and stereotypes and provide us with the crucial lessons of the prejudice and the fear responsible for instigating it.

“Hope is a good thing, maybe the best of things, and no good thing ever dies.”
Being nominated for seven Oscars at the 67th Academy Awards in 1995, including Best Picture and Best Actor for Morgan Freeman. The Shawshank Redemption is a widely celebrated movie. The movie is based on Rita Hayworth & Shawshank Redemption by Stephen King from his 1982 collection of different seasons. The movie is a modern classic narrated through the character Red and gives a larger meaning through various symbols. It is a tale about the triumph of the human spirit.

A timeless iconic movie of all time. Tragic, funny and romantic. Breakfast At Tiffany’s is based on Trueman Capote’s novel. The movie is about a dazzling, free-spirit Holly trying to paint her tragic past with glamour and fantasy. It is a delight to watch two people finding love and independence.

Heartwarming, witty and romantic, if you love reading Jane Austen, you wouldn’t want to miss, Sense and Sensibility. The British-American period drama is an adaptation of Austen’s novel with the same name. One of the reasons that make this movie so loved is its depiction of Dashwoods – high-spirited, witty and innocent ladies. Emma Thompson achieved Oscar for best-adapted screenplay. Truly it remains one of the best versions up to date.

The modern classic, exquisitely directed by Greta Gerwig is an adaptation of Alcott’s book about sisterhood. The movie is about four different and independent women against the traditional expected roles of women. Nominated for six Academy Awards including Best Picture, it is truly an uplifting movie with strong performances and impeccable characters.

The 2012 coming of age drama film is based on Stephen Chbosky’s 1999 novel with the same name. This Chbosky-directed film is a favourite among teenagers. The movie revolves around drug use, friendship and the gift of life. It will make you acknowledge happiness, grief, pain and to move on in life holding onto these diverse emotions. The movie will make you cry and laugh.

The rom-com classic is an adaptation of Jenny Han’s New York Times bestseller about friendship, family and teenage love. The story revolves around a teenager named Lara Jean who writes five letters to the boys she had a crush on but doesn’t plan to send the letters, however, the letters are sent by her younger sister.

This movie won six Oscars at 67th Academy Awards including Best Picture. The movie jumps between decades, giving us the context of the timeline, political climate, and American culture throughout the film. Being as different as the main character is, the film manages to show diversity and yet humanize Forrest in such a way that we connect with him. From walking with leg braces to becoming a fast runner, learning from his mother and raising a child of his own.

Growing emotionally in the soldier phase of his life and contributing his unbelievable skills to his nation and throughout these times staying in love with the girl who taught him to run. People might find the movie to not have a happy ending but in reality, this is as happy as life gets and that’s what makes it so relatable.

Steven Spielberg’s adaptation of Thomas Keneally’s book “Schindler’s Ark” is one of the most moving pieces of all time. Made in black and white filter depicting the Holocaust of the Second World War. The story is about a businessman Oskar Schindler who employs Jewish to save them from the terrifying genocide. Despite the murders of thousands of people, Schindler’s List demonstrates the humanness left in the people.

Ang Lee’s adaptation of Yann Martel’s novel “Life of Pi” is an adventure drama. The story revolves around an Indian boy Pi Patel who survives a shipwreck at age 16 with a Bengal tiger for more than 100 days. The movie is livelily exhibiting the hidden face of hope and nature. The movie is a sort of guide to survive a shipwreck. It also renders a great feat of technical achievement and is emotionally rewarding.

Reading a book and then getting a chance to see our imagination come to life on the screen is so thrilling and surreal. These are some of the best book-to-movie adaptations, you surely would love to watch.

7 Indian Books That Should Be Made Into Films

8 films you didn’t know were based on literary works