by TSA Desk
in News
Reading Time: 11 mins read
A A 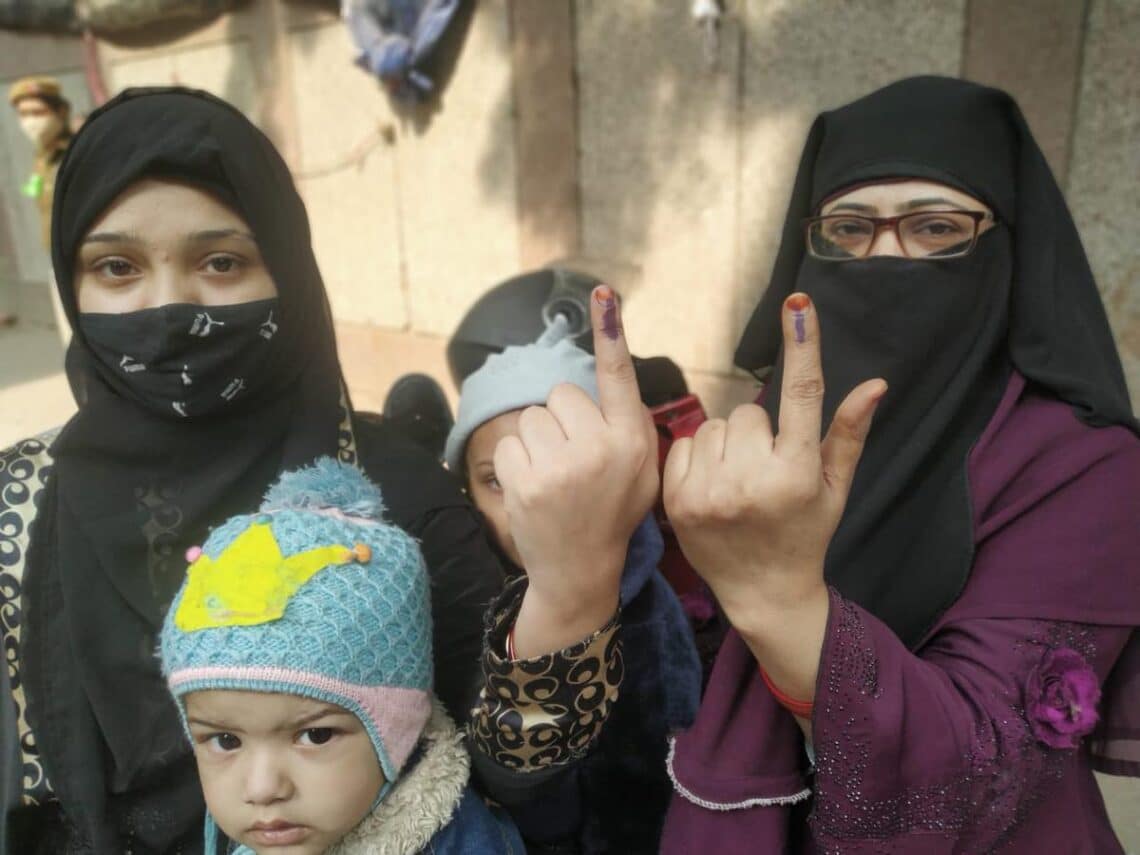 
Over 1.45 crore electors will decide the fate of 1,349 candidates today in the first civic polls since the merger of the three erstwhile municipal corporations — North, South and East — in May, and after the total number of municipal wards were reduced to 250 from the previous total of 272..

The high-stakes poll is largely being perceived as a two-way contest between the Aam Aadmi Party (AAP) and the Bharatiya Janata Party (BJP), while the Congress looks to throw a surprise or two.

The run-up to the polls witnessed large-scale aggressive campaigns which included numerous roadshows and nukkad sabhas by both AAP as well as the BJP, which concluded on Sunday.

AAP has maintained its stance of being “ kattar imandaar” (honest to the core) and mounted its campaign on civic issues revolving around waste management, the city’s three landfills and the MCD’s poor finances that they claim were largely ignored by the BJP during the latter’s 15-year term in the civic body.

Here are the updates:

The voter turnout recorded till 12 p.m. across the 250 municipal wards in the Capital stood at 18%.— The Hindu A newspaper distributor, Babu Das, says his and his sister’s names were missing from the list. “I have checked two polling stations and have roamed around to confirm with polling agents as well,” he says.

Mr. Das, after checking his name online, says, “The polling agents said my name has been removed from the list. They did not tell any reason.”

The 47-year-old says that he had shifted his house some years ago. “We got out address updated when the officials came a couple of months ago. But now our names are not in either of the areas. Officials inside the booth asked me to get it checked online.”

In the last corporation elections, Shah Pur Jat area was part of the Greater Kailash ward, and was shifted to Chirag Delhi after the fresh delimitation exercise.— The Hindu

“Don’t vote for those who are corrupt…”, says Delhi CM Arvind Kejriwal after he casts vote Delhi Chief Minister Arvind Kejriwal and his family members show their fingers marked with indelible ink after casting their votes for the MCD elections, at a polling station in Civil Lines area on December 4, 2022.
| Photo Credit:
PTI

Delhi Chief Minister Arvind Kejriwal voted along with his family on Sunday at a polling booth in Civil Lines for the Municipal Corporation of Delhi (MCD) elections and urged people not to vote for those who are corrupt.

While speaking to media persons after casting his vote, the Delhi Chief Minister said that the election is an opportunity to clean Delhi.

“I appeal to people to vote in large numbers. We can see there is garbage everywhere. It is an opportunity to clean Delhi. Vote for the party which does development work, not vote for such a party that stops the work of Delhi. Vote for the honest party. Don’t vote for those who are corrupt. Vote for good people and not for those who do gundaism, corruption and use abusive language. We have to clean Delhi in the next 5 years,” said the Delhi Chief Minister.— ANI

9% voter turnout recorded until 10: 30 am, according to State Election Commission Delhi. BJP MP Harsh Vardhan shows his finger marked with indelible ink after casting his vote for the MCD elections at a polling station in Krishna Nagar area on December 4, 2022.
| Photo Credit:
PTI

Former Union Health Minister Dr. Harsh Vardhan on Sunday cast his vote for the Municipal Corporation of Delhi (MCD) elections at a polling booth in Krishna Nagar and said hoped that people vote accordingly stating that the BJP has taken the country to new heights.

The former health minister said that he has confidence that a large number of people from Delhi will cast their votes.

“I have full confidence that a large number of people from Delhi will cast their votes. Under the leadership of PM Modi, BJP has taken the country to new heights, I hope people vote accordingly. Delhi has seen the work of BJP in the last 15 years,” said Mr. Vardhan.— ANI

Multiple electors from the Civil Lines ward, in north Delhi, were confused and unable to find the designated polling booths to cast their votes. 33-year-old Anil has been unable to find his polling station after the delimitation exercise changed his ward to Civil Lines.
| Photo Credit:
Muneef Khan

35-year-old Mahesh has roamed across three polling stations to cast his vote, but none seem to have his name on the list.

He added,”No one at polling booth is able to tell me as to which station I should go to. The ward number has changed and i found out only today.”

Echoing a similar view is Anil, who has been frantically hopping from one polling station to another, since 8 am.

“My vote now falls in the civil lines ward, but I can’t seem to find my booth. Its very confusing,” said the 33-year-old.

The total number of municipal wards in Delhi were reduced to 250 — from the previous total of 272 wards — through a Delimitation excercise that was completed in mid-October. This redrawing of ward boundaries has also led to many voters realising that their areas have been shifted to neighbouring wards. — The Hindu

“They have a habit of lying”: BJP’s Parvesh Verma attacks AAP, as Delhiites vote for MCD

Bharatiya Janata Party (BJP) MP Parvesh Verma on Sunday attacked the Aam Aadmi Party by stating that it has a “habit of lying” and exuded confidence that they will get more than 80 per seats in the ongoing Municipal Corporation of Delhi (MCD) elections.

“AAP was claiming to form government in Goa, Uttarakhand and Uttar Pradesh but people know that they have a habit of lying. During the COVID, no one from AAP was seen working for the people. Only MCD workers were standing with them,” Parvesh Verma said after casting his vote along with his wife at a polling booth in Matiala village.

Three first-time voters say they have cast their votes for the betterment of their roads, parks, and garbage condition in their Begumpur village of Malviya Nagar ward. Akanksha, who is an engineering student, says, “Look at this broken road and the garbage on the side. It has been there for years and nobody bothers to look at it.”

“We have also seen who has worked in our area. There are some candidates who don’t even know the area properly,” says a vocal Akanksha and adds that she was sure who to vote for this time.

Kunal, a journalism student at Apeejay Institute of Mass Communication, says, “I have been talking to people and local leaders in my area as it’s our time to observe things around us. We have voted for the better candidate this time and will see now how the person works.” — The Hindu

Delhi Congress president Anil Chaudhary claimed that he found his name missing from the voters’ list when he arrived at the polling booth to cast his vote for the Municipal Corporation of Delhi (MCD) elections on Sunday.

Congress leader Alka Lamba on Sunday urged people of the national capital to vote for change in the Municipal Corporation of Delhi (MCD) elections.

The Congress leader exercised her franchise at a polling booth in Raghuveer Nagar.

“I appeal to people to come out of their homes and vote. People should vote for change,” she said after casting her vote.— ANI Mohammad Alimuddin, 42, a resident of Jafrabad in North East Delhi said that dirty streets and drains are the main issues of the area.

Pointing to open drains clogged with waste and plastic he said, “The situation has been like this for the past five years. Though both councillor and MLA were from the AAP, they did not do anything. Last time I voted for AAP, but this time I didn’t.”

North East witnessed communal riots in 2020 in which at least 53 people were killed and this is the first election in the area since then.

“The riots is in everyone’s mind still. It’s not the sole deciding factor of who I vote for, but it’s still a main factor,” he added.— The Hindu

As voting is underway for Delhi MCD elections on Sunday, Deputy Chief Minister Manish Sisodia accused BJP of not doing anything for Delhi for the last 15 years and said that it has failed miserably to work for the people of the city.

Mr. Sisodia appealed to the people of the national capital to vote in record numbers and to make the city clean.

“1.5 crore people are going to vote in Municipal Corporation polls today. I appeal to people to keep in my mind that MCD’s priority is to keep Delhi clean, sanitation issues, landfill, corruption, parking mess, stray animals and to build schools and hospitals among others. everyone to think before voting and vote for keeping Delhi clean. Vote for a garbage-free Delhi,” he said.— ANI

Delhi Chief Minister Arvind Kejriwal on Sunday urged people in the city to exercise their franchise for setting up an honest and performing establishment in the Municipal Corporation of Delhi (MCD).

“Today is voting for making a neat and clean and beautiful Delhi, voting for forming a corruption free government (establishment) at the municipal corporation.I appeal all the Delhi citizen to do go for voting to form an honest and performing government at the MCD,” Mr. Kejriwal tweeted in Hindi.— ANI

Tight security in view of the polls in Delhi

Around 40,000 police personnel, 20,000 home guards as well as 108 companies of paramilitary and state armed police forces will be deployed to ensure smooth conduct of the MCD election, officials said.

Sixty drones will also be used to ensure law and order in sensitive areas, they said. — PTI

Voting begins for 250 municipal wards in the national Capital Delhi gears up to elect 250 municipal wards from 1349 candidates on a chilly winter morning. Voting started at 8 a.m. and will continue till 5:30 p.m.

After days of high-decibel campaigning by what is being seen as a two-way contest between AAP and BJP, the people of Delhi vote in the first civic polls since the merger of the three erstwhile municipal corporations.

All wholesale and retail markets in the national capital will remain closed on December 4 in view of the civic body polls here, a traders’ body said on Saturday.

(With inputs from Agencies)