Fact check: Artwork dating back to 2014 falsely linked to anti-Hijab agitation in Iran 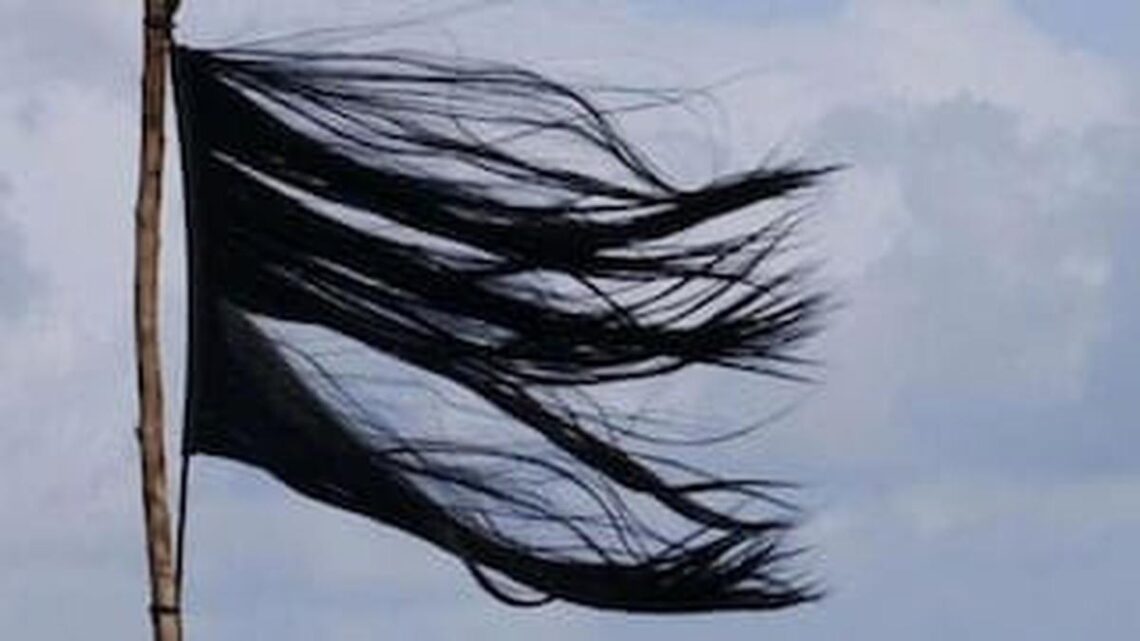 “The world’s most powerful picture has come out of Iran,” says a Facebook post while describing the image of the flag, which started doing the rounds in the wake of the protests sparked by the death of 22-year-old Mahsa Amini. Ms. Amini died after she was detained by Iran’s ‘morality police’ for not wearing hijab properly, thus violating the country’s dress code.

The claim was also shared by prominent personalities.

Chinese dissident artist Ai Weiwei shared a link to a Firstpost article featuring the image with the headline, ‘Flag of Honour: Iranian women hoist chopped hair on stick as most powerful symbol of dissent.’

Mahsa Amini’s death triggered a wave of protests, to which the Iranian regime responded with a deadly crackdown. The protesters have been burning hijabs in public, cutting their hair and chanting ‘death to the dictator’ as acts of defiance against draconian laws that place severe restrictions on women’s rights.

But The Hindu found that the symbolic ‘hair flag’ is not what it has been made out to be.

A reverse image search revealed that it is an artwork by visual artist Edith Dekyndt. A screengrab from a video of the artwork, available on Edith Dekyndt’s official website.

We also contacted the spokespersons of various art galleries representing Edith, who confirmed that the flag was part of one of her art installations.

“The picture with the flag made of hair used by the social media for the protests in Iran is indeed a still taken from a video installation made by the Belgium artist Edith Dekyndt. The video installation is entitled ‘Ombre Indigène Part 2 (Ile de la Martinique)‘ made in 2014. What is used on social media is just an extract of her work,” said Magali Wyns, a spokesperson for Galerie Greta Meert, Belgium.

Jonas Kriszeleit, Director of the Konrad Fischer Galerie in Germany, gave the following official description for the artwork:

“A flag made of human hair was stuck in the ground and filmed on top of rocks on the Diamant coast, in Martinique. There, precisely, on the night of 8 April 1830, a clandestine slave boat transporting a hundred African captives washed up on the rocks before being entirely destroyed. Edouard Glissant was buried not far, in the small town of Diamant. Native from this island, this author is at the origin of the “tout-monde” (one-world) and “creolisation” concepts, the latter being like an “interbreeding producing unpredictability.“

Picking up the claim, French public service broadcaster Arte ran a segment to put it in context.

“…Yet this shot was not taken in Iran in the current context of revolt, but in Martinique in 2014. It is taken from a video by Belgian artist Edith Dekyndt who filmed this flag made of hair installed on rocks from the Diamant coast on the island of Martinique. According to the catalogs accompanying this work, it symbolizes the tragedy of a boat completely destroyed at this place and which transported a hundred African slaves in 1830, as well as a tribute to the Martinican philosopher Edouard Glissant,” it said.

While many have been sharing the image of the flag as a symbol of the anti-government agitation in Iran, the claim that it was made of the hair of the protesters is false.

Need united efforts to be self sufficient in agriculture, PM Modi to farmers