Footsteps of the Buddha: Monks from Bhutan on trip to India 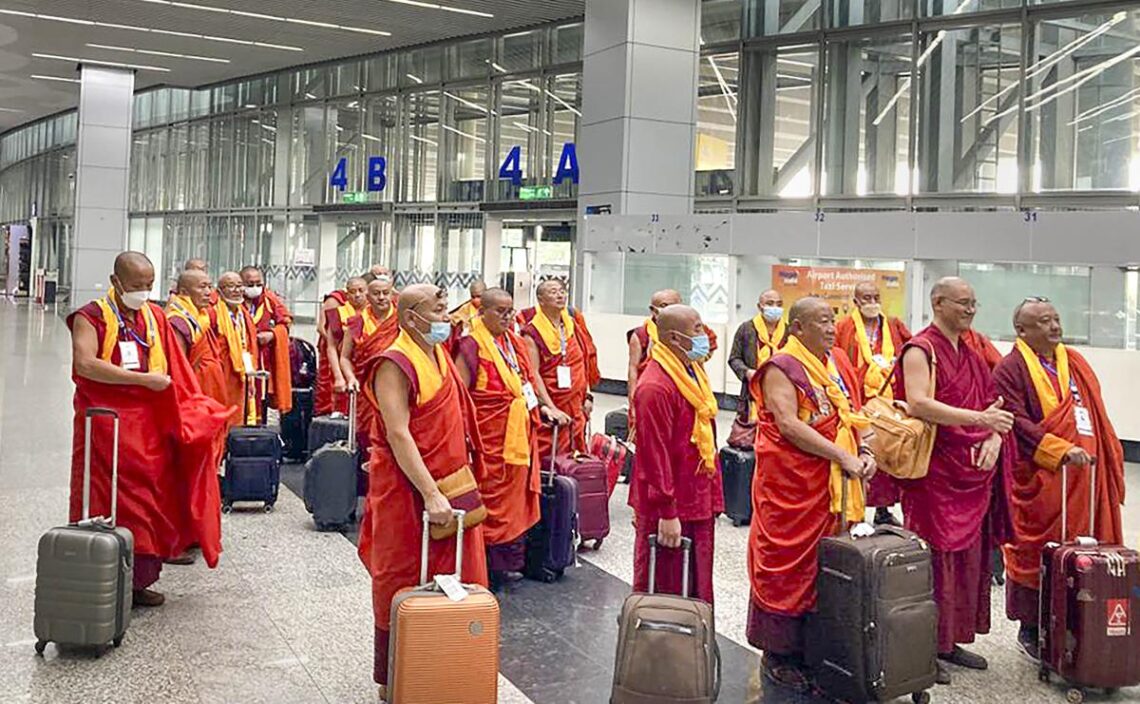 
A delegation of leading Buddhist monks from Bhutan upon arrival in Kolkata on November 22, 2022, en route for a trip to holy Buddhist sites in the country.
| Photo Credit: PTI

The Kolkata airport was awash with red-ochre robes as high-ranking monks from the ‘Land of the Thunder Dragon’ arrived in Kolkata on November 22 on a spiritual and academic tour of India, from where Guru Padmasambhava travelled to teach Buddhism to Bhutan.

The 24-member delegation will visit Buddhist holy sites, the Infosys campus at Hyderabad as well as meet top Indian officials in Delhi.

“It is the duty of every member of the Sangha [Buddhist monastic order] to try to follow in the footsteps of the Buddha,” Venerable Ugen Namgyal, the secretary of the Central Monastic Body of Bhutan, told PTI, explaining why the powerful delegation is on a visit to the country.

The International Buddhist Confederation (IBC) in coordination with the Central Monastic Body of Bhutan has organised the eight-day long trip for the monks who head the Buddhist Sangha in each of the districts in the picturesque Himalayan kingdom, which lies sandwiched between India’s West Bengal and China’s Tibetan autonomous region.

Bhutan is known for its Buddhist culture, where people’s lives still revolve around the traditions associated with the religion.

Prayer flags fluttering in the wind and chortens (Buddist shrines) in every village are a common sight. The concept of ‘Gross National Happiness’ as a development model for the kingdom nestled in the high Himalayas too relies in large part on this unique culture.

“We have two giant neighbours on two sides, but with India, we have a wonderful relationship. Buddhism came from this country. Bengal, our immediate neighbour, has strong linkages with us and has contributed to Buddhism in our Kingdom,” said Ven. Namgyal.

Guru Tilopa is believed to have travelled to Bhutan from Bengal preaching the Vajrayana school of Buddhism. Most Bhutanese follow the Drukpa subsect of the Kargyupa sect of Vajrayana Buddhism.

The monks, led by IBC’s deputy secretary-general Venerable Jang Chup Choden and Ven Namgyal, will visit various Buddhist sites in India, including the Nagarjuna Konda in Andhra Pradesh, Buddhavanam in Telangana and Sankissa in Uttar Pradesh.

‘Zhung Dratshang’ or the Central Monastic Body of Bhutan was established in 1620. The unification of the country, codification of the laws, and organisational development of the dual system of governance took place only after the establishment of this significant institution.

According to Bhutan’s Constitution, the ‘Zhung Dratshang’ is an autonomous institution, financed by an annual grant from the royal government.

“For us, Buddhism is a way of life. Even our arts and architecture reflect our religious traditions,” he said.

“While China too is a neighbour, we have little interaction with that country. Being Buddhist, Bhutanese have a greater affinity to Indian values,” the monk said.

CIAL business jet terminal to be commissioned on December 10