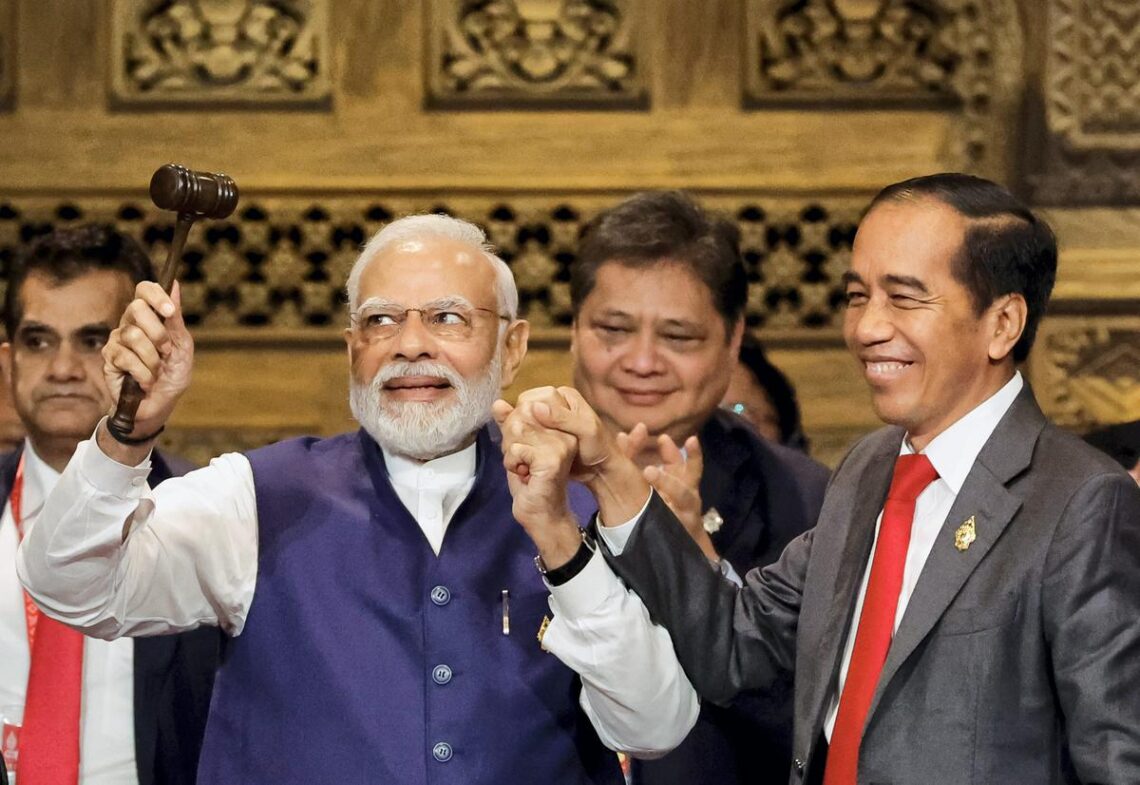 India’s G20 presidency will be “inclusive, ambitious, decisive, and action-oriented”, said Prime Minister Narendra Modi, who accepted the ceremonial gavel from Indonesian President Joko Widodo at a handover event during the conclusion of the G20 summit in Bali on Wednesday. Mr. Modi, who also held meetings separately with the leaders of Australia, France, Germany, Italy, Singapore and the U.K., thanked Mr. Widodo at the event, and said that the world was looking to India’s leadership of the forum of the largest economies with “hope”.

“India is taking charge of the G20 at a time when the world is simultaneously grappling with geopolitical tensions, economic slowdown, rising food and energy prices, and the long-term ill-effects of the pandemic,” Mr. Modi said during the closing ceremony. He said that India would give priority to “women-led development” in its G20 agenda, which would be driven by the recently unveiled theme of “One Earth, One Family, One Future”. India is expected to showcase its geographical and cultural diversity during the year, and will hold approximately 200 G20 meetings at different locations across the country.

Sources said that Mr. Modi’s bilateral talks with Mr. Widodo focussed on the problems of “food and energy security” that have particularly arisen due to the war in Ukraine. Earlier this year, Indonesia removed a ban on palm-oil exports due to global shortages, and the Indian ban on wheat, sugar and other commodities was also discussed.

The day began with a visit to Indonesia’s famous mangroves where the leaders planted saplings and interacted informally.

Speaking to the media, Mr. Sunak said that he was “committed” to the FTA with India, but wouldn’t sacrifice “quality for speed”, and wanted to “take the time to get trade deals right”. The U.K. PM’s office said that Mr. Sunak, who is the first British Hindu PM of Indian-African origin, also “passed on his thanks to Prime Minister Modi for the overwhelming response of the Indian people to his appointment as Prime Minister.”

While the issue of the Russian war in Ukraine overshadowed G20 proceedings on Wednesday, particularly after a number of missile strikes by Russia on Ukrainian cities, none of the Ministry of External Affairs’ (MEA) readouts referred directly to the issue in talks between Mr. Modi and the European leaders, including French President Emmanuel Macron, German Chancellor Olaf Scholz and Italian Prime Minister Giorgia Meloni. A meeting with Spanish PM Pedro Sanchez didn’t materialise, ostensibly due to delays as the NATO and G7 leaders held a separate meeting to discuss the Russian strikes and an explosion in Poland believed to have been caused in the process. Mr. Modi’s meeting with the Italian Prime Minister Giorgia Meloni, who was elected in September, focussed on deepening India-Italy cooperation in “energy, defence, culture, boosting [efforts to combat] climate change and the economic partnership,” he said in a tweet. “Prime Minister congratulated Prime Minister Meloni on her election as the first woman Prime Minister of Italy,” the MEA added.

In a meeting with German Chancellor Olaf Scholz, the two leaders spoke about the “green partnership” on renewable energy, as well as strengthening trade and investment, the MEA said. It’s the third time this year that Mr. Modi has held talks with him.

Mr. Modi’s talks with Mr. Macron referred to the defence partnership between India and France, as well as the civil nuclear cooperation pertaining to the much delayed Jaitapur nuclear power plant. Tweeting in Hindi and French, Mr. Macron said that he “shared the same agenda for peace as Prime Minister Modi” and would work on this agenda under the upcoming G20 chairmanship of India.

“So wonderful to see my friend”, tweeted Australian PM Anthony Albanese of his meeting with Mr. Modi, adding that they discussed how India and Australia can “work more closely on Indo-Pacific security, including as Quad partners”. The MEA said that the two leaders reviewed progress in cooperation in “defence, trade, education, clean energy and people-to-people ties”, with a particular emphasis on partnerships in education and capacity building.