International Day of Democracy: Is democracy the best way of promising your rights?

Democracy is seen as one of the best form of government as it promises certain rights which no other government does. At this International day of DEMOCRACY, let's take a glimpse at pros and cons of it.

The International Day of Democracy is celebrated around the world on 15 September each year. It was established through a resolution passed by the UN General Assembly in 2007, encouraging governments to strengthen and consolidate democracy.

Democracy is known as the finest form of government. Because in a democracy, the people of the country choose their government. As we have learnt our very first definition of democracy as “It is for the people, of the people and by the people” where the word ‘PEOPLE’ remains constant throughout the definition.

Democracy has withstood the test of time, and while other forms have the government has failed, democracy stood strong. It has time and again proved its importance and impact. There are various democratic countries in the world, but India is the largest one with the bulkiest constitution to make sure that its principles are followed.

Different time periods and different civil societies from different parts of the globe have their own models and interpretation of democracy. Democracies have a broad term and also contain a lot of elements. Political freedom is one of the elements that it can provide to the people. All humans should be considered as humans and should be provided with certain rights irrespective of their gender, caste, sex and all the other biased factors. And this thing is assured by DEMOCRACY. It allows its citizens to participate in elections and choose their representatives from among their own selves. It enables people to vote freely without suppression from anyone, instead, they are under their own willingness.

It is considered to be independent of any other authority of the nation. The Supreme Court, which is the judiciary, can rule a law to be unconstitutional. It is the guardian of our Fundamental Rights. The Constitution bench of the Supreme Court of India has given a shot in the arm for democracy. The role of the judiciary is to adjudicate disputes according to law. Adjudication involves three functions: fact determination (done mostly by the trial court), law application and law determination. The third function-law determination-does do not involve, in most cases, any creation. The law is known and determined. 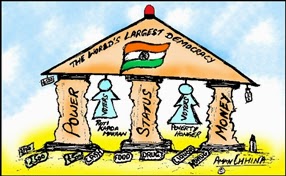 It reminds me of all the bloodshed and all the departures of the people from our land. It reminds me of the time when everyone fought all together to get independent of British Rule, to establish a Democratic regime in our country. And when finally after years of Struggle, our country became the Largest Democratic Country of the World in 1947. It became an Independent Country, independent of any foreign rule, independent of getting judged based on based. And independent of all the various setbacks. The youth was provided with Universal Adult franchise where an adult can choose its leader, with a right to vote irrespective of gender, colour, or anything.

India follows five principles of democracy. They are secular, sovereign, republic, socialist, and democratic regimes to be established throughout the country.

All the above-written definitions and theories are a part of what our country and Democracy was supposed to do. But now let’s talk about the current reality. Democracies across the globe are fighting a battle of survival today. India, one of the largest democracies in the world, is facing an existential threat from internal forces motivated by vested interests and narrow political gains. Although India is the largest democracy it still has a long way to go. The country faces a lot of problems which do not let it efficiently function as a democracy. Let’s talk about such issues in details:

Irrespective of various articles mentioned in our Constitution and numbers of upliftments provided to the people belonging to a lower caste, the Caste system is still prevalent in our society, which hampers the socialist principle of democracy.

Media plays a crucial role in shaping a healthy democracy. It is the backbone of democracy and is considered to be the fourth pillar of Democracy. As it makes leaders accountable for their doings by asking them questions. But what is the media actually doing? Instead of raising important issues like a sudden setback in our economy, suicides of farmers and many many more, It is determined in showing the truth of Rhea Chakraborty. This is what it has turned out to be. The media is supposed to be just like a warrior fighting with a pen or like a mirror which shows us or strives to show us the bare truth and astringent realities of life. However, in recent years the media has, like other agencies, come under the influence of politicians. Therefore, the media no longer writes about the people’s grievances but in support of the ruling government party. It has been contaminated by political influences. Or a mare puppet in the hands of the government.

The thirst of power is becoming a threat to the public. Political professionalism appears to be a joke after acquiring a certain post. During an election campaign, it appears as if they are going to be the greatest government ever formed in the entire history but the result is as we can see it not that satisfactory. When they are certainly making history but the fulfilment of promises is quite opposite

India is a multi-cultural, multilingual and multi-religious country, this is probably the most read and written assertion that comes to mind when we think of India. Now, the question arises what should be an Indian like? What should be a nationalist’s appearance? A simple conclusion could be one who abides by the rules, knows about his fundamental rights and acknowledges his fundamental duties. The case was so for a long time after the Indian constitution mentioned it. The changing winds have brought seeds of hypocrisy and religious intolerance. Over the last decade, it took a new turn. Definitions of a nationalist changed. A religious angle was established. Certain parameters were decided. India took a dive into religious havoc and the conventional concepts were shed apart. Those definitions are now just for namesake in the constitution as the photographs of great leaders in a corrupted bureaucratic office. A person’s love for his country is being decided on the fact that how much he loves the ruling party.

Also read: Fascism And The Rise Of ‘Bhakt’ Culture: A Towering Concern In The 21st Century

20 People of Indian-Origin Who Hold Top Positions Outside India

CREO – A secretive non-profit club of the world’s elite…

CREO – A secretive non-profit club of the world’s elite…