Iran at political crossroads – The Hindu 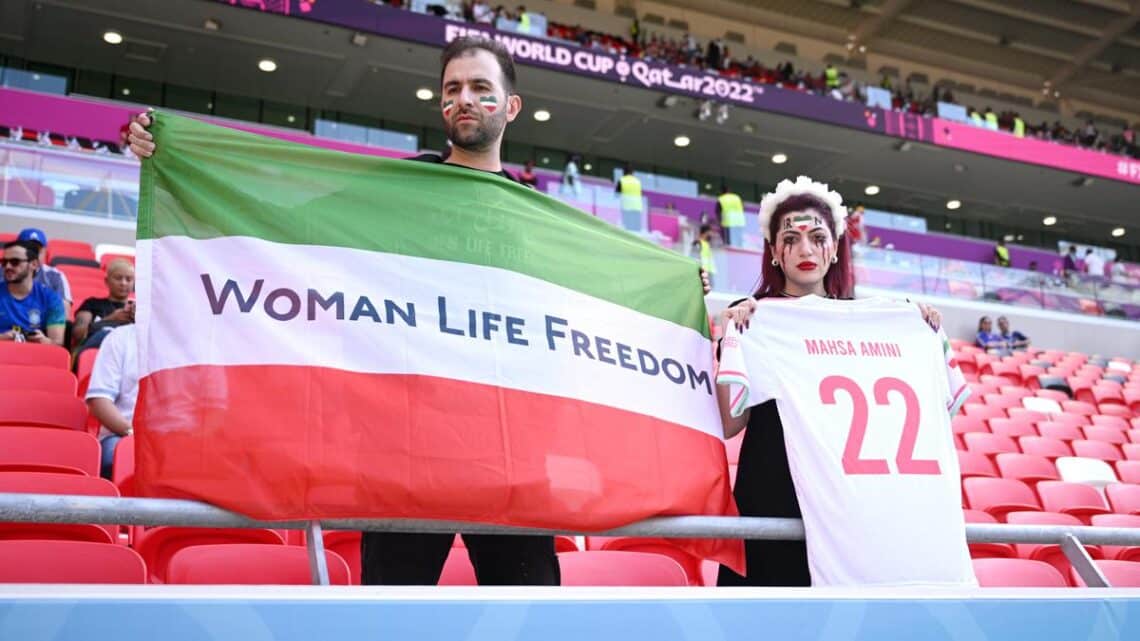 
Fans hold up a shirt with the name of Mahsa Amini and a flag advocating women’s rights during the FIFA World Cup Qatar 2022 Group B match between Wales and the Islamic Republic of Iran in Doha, Qatar
| Photo Credit: Getty Images

Iran has been rocked by agitations since the killing of Mahsa Amini, 22, who was in detention of the morality police enforcing strict hijab norms, in September. These demonstrations have been led by women chanting “Woman, Life, Freedom” and mocking their clerical leaders by publicly burning their hijab and cutting off their hair. They now include participants from all classes and ethnic backgrounds, including workers, business people, sportspersons and celebrities.

Security forces have responded harshly: by early December, nearly 500 persons had been killed. About 20,000 people have been detained, several have been given death sentences, and two people have already been executed. On December 14, the United Nations Economic and Social Council voted to expel Iran from the UN Commission on the Status of Women.

The Iran government has defended itself by describing the agitators as terrorists who are using weapons provided by foreign sources. Arms caches have been discovered in the Sistan-Baluchestan province and “terrorist” groups have been apprehended with firearms in other provinces. Some demonstrators have burned official vehicles and attacked security personnel in response to police brutality.

Iran has a long history of public protests. In 2009, there were agitations against the manipulation of results in the presidential elections. In 2017-18, a parlous economic situation brought about 50,000 people on to the streets while in 2019, over 2,00,000 demonstrators had agitated in over a hundred cities.

The ongoing agitations are significant because they are led by women protesting about the disabilities inflicted upon them as part of the Islamic regime’s moral code. But now there is anger not just about the hijab, but about the economic situation and the abridgement of personal rights. Placards carry the slogan, “Death to Khamenei”, Iran’s supreme leader and the principal guardian of the Islamic revolution.

The root cause remains the economic situation. As a result of crippling sanctions, millions of middle-class Iranians have dropped down the economic scale. Around 36% were living in absolute poverty in 2019. Sanctions have also reduced the national growth rate from 12.5% in 2016 to a paltry 2% at present. Again, with sanctions denying Iran the right to sell its oil abroad, in 2021-22, the petroleum sector contributed just 8% to the economy, crushing the people with inflation and unemployment.

The government appears to be bewildered by the persistence of the agitations despite the harsh measures of the security forces. This has led to some efforts at ameliorating the situation with palliatives. On December 4, the country’s chief prosecutor announced that the morality police had been “abolished”, but some hardliners, fearing this concession would be seen as a sign of weakness, denied the news. There have also been reports of the government’s outreach to “reformists”, represented by former president Mohammad Khatami. But hardliners have denied that any such dialogue has occurred, while Mr. Khatami’s associates have said that his suggestions for reform have been rejected by the government.

However, there is a deeper problem: Iran’s ‘reformists’ uphold the Islamic order and only advocate the removal of some of the harsher aspects of the Iranian system, particularly those relating to women. They have little in common with Iran’s ‘secular republicans’ who are spearheading the agitations and seeking an end to the influence of religion in state affairs. Heavily influenced by sections of the Iranian diaspora in the West, these ‘secular republicans’ believe that Iran’s population is becoming more liberal.

The U.S. has sought regime change in Iran since the Islamic revolution. Hence, not surprisingly, most western commentators believe that the unrest portends the end of the Islamic order, possibly because organisations supporting the regime could be splintering and seeking an alternative basis for governance. The U.S.-based writer, Karim Sadjadpour, believes that Iran’s 40-year Islamic Republic will be defeated by the people’s commitment to pluralism and patriotism that goes back two millennia. Another distinguished commentator, Ali Ansari says that state repression will lose its stamina over time and give way to a ‘supportive hinterland’ that will provide new leaders and new manifestoes for reform.

There is reason to doubt the imminent advent of this liberal order. What western observers ignore is the deep-seated antipathy among Iranians for the U.S. and Israel, which are viewed as the principal sources of their misery, most recently through the unilateral U.S. withdrawal from the nuclear agreement and the imposition of onerous sanctions on Iran. Again, the U.S. has now delayed the finalisation of the nuclear agreement to avoid sanctions relief and maintain economic pressure on the beleaguered regime.

Given the deep roots of Islam in Iranian society and the support provided to the Islamic order by several institutions created by the constitution, there is little likelihood of a collapse – slow or dramatic – of this order. The most that can be expected are some small steps towards change, particularly where women are concerned. But the core of the Iranian order, defined by the co-existence of the supreme leader as the guardian of the revolution and a directly elected president, with both espousing resistance to western hegemony, is likely to endure.

10 Must Try Food From Argentina