Joe Biden tells African leaders U.S. is ‘all in’ on the continent 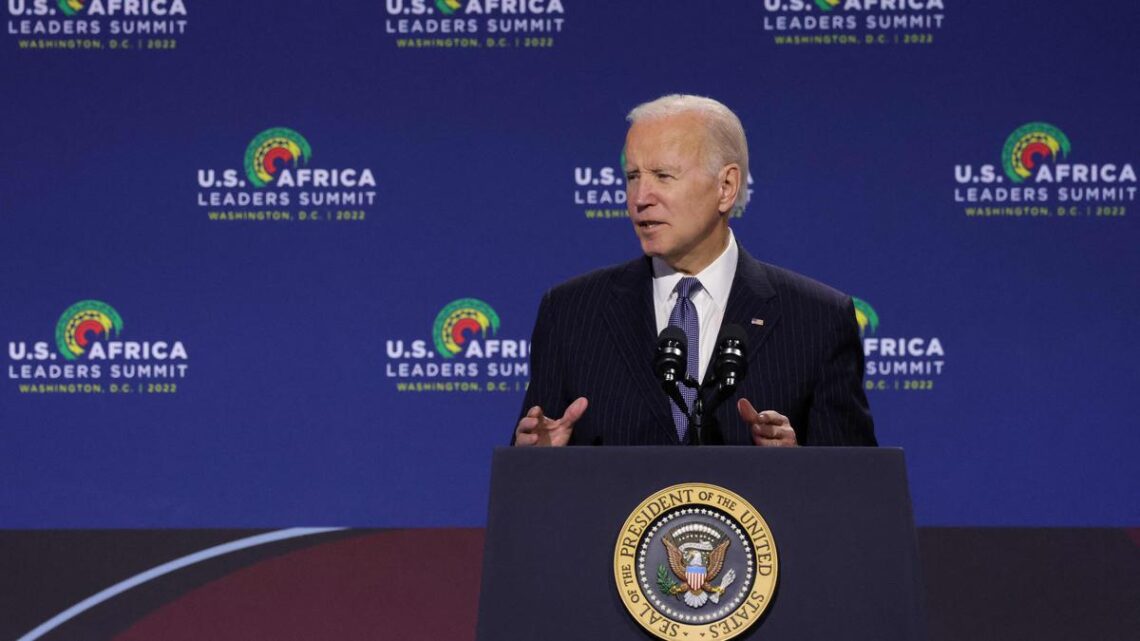 
President Joe Biden told dozens of African leaders gathered in Washington that the United States is “all in on Africa’s future,” laying out billions in promised government funding and private investment on December 14 to help the growing continent in health, infrastructure, business and technology.

“The U.S. is committed to supporting every aspect of Africa’s growth,” Mr. Biden told the leaders and others in a big conference hall, presenting his vision at the three-day U.S.-Africa Leaders Summit of how the U.S. can be a critical catalyst.

Mr. Biden, who is pitching the U.S. as a reliable partner to promote democratic elections and push critical health and energy growth, told the crowd the $55 billion in committed investments over the next three years — announced on Monday — was “just the beginning”.

He announced more than $15 billion in private trade and investment commitments and partnerships.

“There’s so much more we can do together and that we will do together,” Mr. Biden said.

The President after his speech spent some time with leaders, including Moroccan Prime Minister Aziz Akhannouch, watching Morocco’s World Cup match with France. Morocco lost but made history as the first African team to advance to the tournament’s semifinal round.

The United States has fallen well behind China in investment in sub-Saharan Africa, which has become a key battleground in an increasingly fraught competition between the major powers. The White House insists this week’s gathering is more a listening session with African leaders than an effort to counter Beijing’s influence, but the President’s central foreign policy tenet looms over all: America is in an era-defining battle to prove democracies can out-deliver autocracies.

On Dec. 14 Mr. Biden also held a smaller meeting at the White House with the leaders of the Democratic Republic of Congo, Gabon, Liberia, Madagascar, Nigeria and Sierra Leone. Thursday is to be dedicated to high-level discussions among leaders; Mr. Biden will open the day with a session on partnering with the African Union’s strategic vision for the continent.

The President and first lady were hosting a White House dinner for all the leaders and their spouses Wednesday night. Gladys Knight and the St. Augustine Gospel Choir of Washington, D.C., were to perform, and the food done by Mashama Bailey, the executive chef of The Grey, a Southern cooking spot in Savannah, Georgia.

The summit is the largest international gathering in Washington since before the start of the pandemic. Roads all around the city centre were blocked off, and motorcades zoomed by gridlocked traffic elsewhere, ferrying some of the 49 invited heads of state and other leaders.

Many leaders of the continent’s 54 nations often feel they’ve been given short shrift by leading economies. But the continent remains crucial to global powers because of its rapidly growing population, significant natural resources and sizable voting bloc in the United Nations. Africa also remains of great strategic importance as the U.S. recalibrates its foreign policy with greater focus on China — the nation the Biden administration sees as the United States’ most significant economic and military adversary.

Equatorial Guinea was invited despite the State Department stating “serious doubts” about last month’s election in the tiny Central African nation. Opposition parties “made credible allegations of significant election-related irregularities, including documented instances of fraud, intimidation, and coercion,” according to the department. Election officials reported that President Teodoro Obiang’s ruling party won nearly 95% of the vote.

Zimbabwe, which has faced years of U.S. and Western sanctions, also was invited.

Tunisian President Kais Saied, who has been criticized by the United States for democratic backsliding, used an appearance before reporters with U.S. Secretary of State Antony Blinken on Wednesday to offer a stout defence of actions he has taken, including suspending the Parliament and firing judges.

“The country was on the brink of civil war all over the country, so I had no other alternative but to save the Tunisian nation from undertaking any nasty action,” Mr. Saied said.

Mr. Biden made no mention of China in his remarks, and White House officials rejected the notion that the summit was in part about countering China’s influence.

National Security Council spokesman John Kirby said the administration is “refusing to put a gun” to Africa’s head and make it choose between U.S. and China. At the same time, he said “there’s nothing inconsistent about calling a fact a fact and shedding light on what is increasingly obvious to our African partners about China’s malign influence on the continent.”

Still, the summit-related activity got a rise out of China. Foreign Ministry spokesperson Wang Wenbin said the U.S. should “respect the will of the African people and take concrete actions to help Africa’s development, instead of unremittingly smearing and attacking other countries”.

Mr. Wang said at a briefing Wednesday that it is the “common responsibility of the international community to support Africa’s development.” But he added, “Africa is not an arena for great power confrontation or a target for arbitrary pressure by certain countries or individuals.”

Rwandan President Paul Kagame also bristled at the idea of his country and others on the continent getting caught between the U.S. and China. “I don’t think we need to be bullied into making choices between U.S. and China,” Mr. Kagame said during an event on the summit’s sideline hosted by the news organization Semafor.

Mr. Biden has promised U.S. support for a permanent Group of 20 seat for the African Union, and the appointment of a special representative to implement summit commitments.

In addition to China, talks also spotlighted what the U.S. has sees as malevolent Russian action on the continent.

The administration argued in its sub-Saharan strategy published earlier this year that Russia, the preeminent arms dealer in Africa, views the continent as a permissive environment for Kremlin-connected oligarchs and private military companies to focus on fomenting instability for their own strategic and financial benefit.

During an appearance with Mr. Blinken on Wednesday, Ghanaian President Nana Akufo-Addo expressed alarm about the presence of mercenaries from Russia’s Wagner Group in Burkina Faso directly north of Ghana. This follows a similar deployment of Wagner forces in Burkina Faso’s immediate neighbour Mali.

“Today, Russian mercenaries are on our northern border,” said Akufo-Addo, adding that he believed Burkinabe authorities had given the Wagner Group control of a mine for payment and that the country’s Prime Minister had recently visited Moscow.