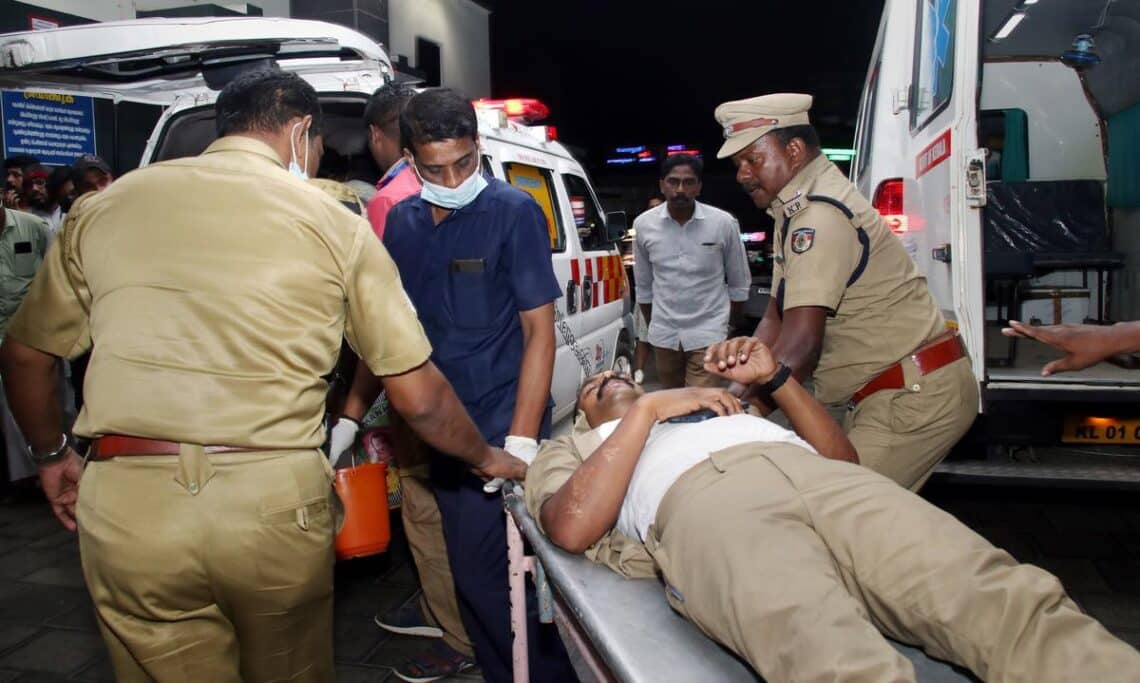 
An injured police personnel being shifted to a hospital after a mob of agitators attacked Vizhinjam police station following the arrest of one person in connection with violent protests against the construction of Adani port, in Thiruvananthapuram
| Photo Credit: PTI

The Kerala government has agreed to the Congress-led United Democratic Front (UDF) opposition’s demand for an adjournment debate in the Legislative Assembly on the Latin Catholic Church-backed fishers’ agitation against the Vizhinjam port.

The Church-supported Vizhinjam Action Council (VAC) has been on the warpath against the ports’ breakwater construction since August, citing severe livelihood and environmental concerns.

Also read | For Vizhinjam, business as usual is not an option

For one, the VAC has said the encroaching sea rendered scores of fishers in Vizhinjam homeless. The port construction caused choppy waters, making fishing perilous in the littoral waters.

The VAC demanded the government halt the port construction till a credible impact assessment study by independent experts, including those suggested by the Church, weighs the long-term fallout of the international shipment port.

On Tuesday, Congress legislator, M. Vincent, moved an adjournment motion seeking the leave of the House to discuss the restiveness in the communally sensitive coastal locality owing to the government’s alleged failure to resolve the dispute by taking all stakeholders on board.

Chief Minister Pinarayi Vijayan said the government was willing to debate the issue in the House.

Subsequently, Speaker A.N. Shamsheer allowed the UDF’s adjournment motion. The Assembly will continue the discussion of the matter between 1 p.m. and 3 p.m.

Mr. Vijayan indicated that halting port construction was off the table. Instead, he signalled the government’s willingness to accommodate the VAC’s demand for a robust long-term rehabilitation package. CPI(M) State secretary M.V. Govindan termed the storming of the Vizhinjam police station by the Church-backed Vigilance Action Council (VAC) on November 27 as a premeditated attempt to unleash anarchy in the State.

The Church blamed the police for provoking the violence at the government’s behest to discredit the anti-port agitation.

(The violence resulted in injuries to 35 law enforcers, destruction of public property and communal tension)

Mr. Govindan also saw a well-entrenched plot to scuttle the international port to advantage foreign competitors and demanded an enquiry.

Moreover, he believed that the police should prosecute the mob, including Church leaders, whom the CPI(M) accused of inciting violence.

Mr. Govindan also rejected the argument that the police station attack was a peaceful protest that got out of hand. He said the “plotters” who incited the mob hoped to precipitate a police firing to render the elected government shaky.

The adjournment debate will unfold as the Cabinet subcommittee on Vizhinjam port is pursuing back-channel negotiations to bring Church leaders to the table.

Hence, it is also likely that the ruling front might tone down its criticism of the Church and protesting fishers to leave the door open for a speedy reconciliation.

The UDF will attempt to take the government to task for ignoring the 130-day-old fishers’ agitation.

Leader of Opposition V. D. Satheesan has declared that the UDF was not against the port’s construction.

However, the government should conduct a credible environmental and social impact study and address the fishing community’s concerns.

The UDF is also mindful that the previous Oommen Chandy government had initiated the State’s flagship project.

The government’s efforts to break the impasse have so far come to nought.

A possible stumbling block to breaking the deadlock might be the prosecution of criminal cases registered against church leaders and hundreds of VAC activists in connection with the police station attack and the violation of the Kerala High Court’s order not to blockade or trespass on the project site.

The VAC has demanded their nominee on the independent committee constituted to study the environmental and social impact of the port.

It has also requested a monthly honorarium of not less than ₹8000 for fishers displaced from their dwellings by the encroaching sea.

The VAC has reportedly ruled out any direct talks with the government till both parties struck an understanding away from the public glare. The government will likely put its cards on the table during the Assembly debate.