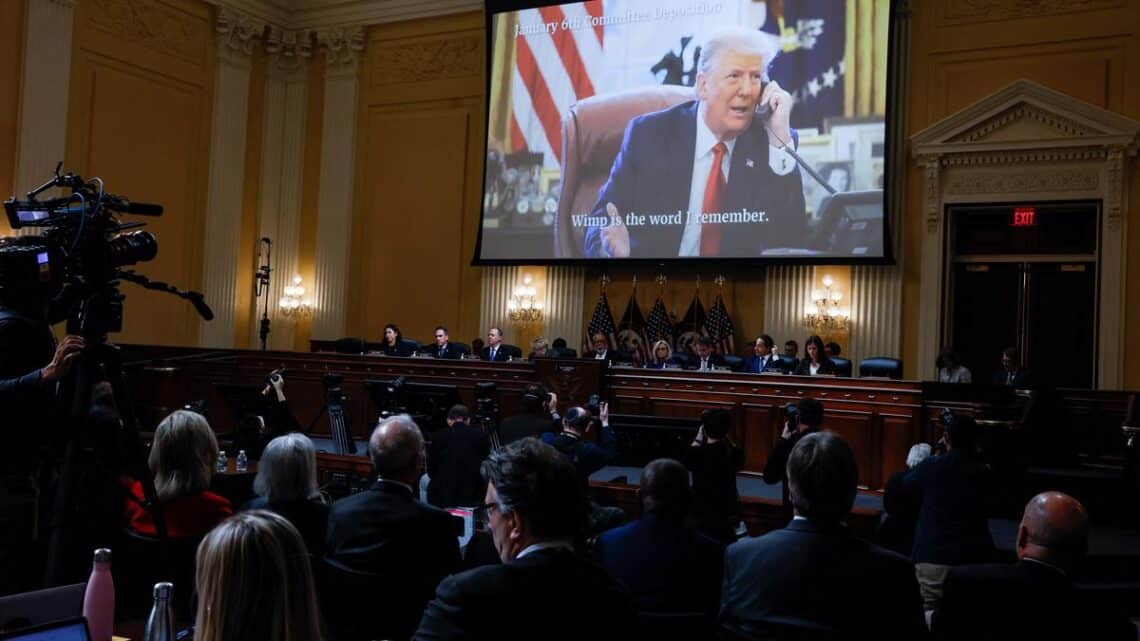 The House January 6 committee urged the Justice Department on Monday to bring criminal charges against former President Donald Trump and his allies, wrapping up its investigation of the violent 2021 Capitol insurrection with what lawmakers called a “roadmap to justice.”

Google, the world’s most popular search engine, is working on making text and voice internet search available in over 100 Indian langugages, its India-born CEO Sundar Pichai said on Monday.

The Supreme Court has disposed of 6,844 cases since Chief Justice of India (CJI) D.Y. Chandrachud took over as the country’s top judge on November 9. The court has also received 5,898 new cases in the same period of one month and seven days. It is a rare feat on the part of the court that the rate of disposal of cases has exceeded the rate of institution of new cases.

BPL families under Ujjwala scheme in Rajasthan to get 12 LPG cylinders a year at ₹500 each: Ashok Gehlot

The Congress government in Rajasthan will provide 12 LPG cylinders a year at ₹500 each to poor families enrolled under the Pradhan Mantri Ujjwala Yojana from April 1, Chief Minister Ashok Gehlot said on Monday. Mr. Gehlot made the announcement at a public meeting organised during Congress leader Rahul Gandhi’s Bharat Jodo Yatra at Mala Kheda village in Alwar district.

We should not, directly or indirectly, criticise our jawans, says EAM Jaishankar

“We should not, directly or indirectly, criticise our jawans,” External Affairs Minister (EAM) S. Jaishankar said, adding that they were standing their ground at Yangtse and did not deserve the word “  pitaai“ (beaten). He was speaking in response to comments by Congress leader Rahul Gandhi.

Opposition stepped up the attack on government over incursions by China, with members staging a walk-out on December 19, 2022 after a debate was disallowed by the Chairperson of the Rajya Sabha. Later in the day, while participating in a debate on supplementary demands for grants, Congress leader P. Chidambaram asked if the border situation was discussed when Prime Minister Narendra Modi met Chinese President Xi Jinping during the G-20 summit at Bali, Indonesia on November 15.

The Centre has told the Supreme Court that a ban imposed by certain coastal States on purse seine fishing, which is known to disadvantage endangered species, is not justified.

The mode of fishing which uses a wide net to draw in not only the targeted fish but also at-risk varieties, including turtles, is prohibited by several States and Union Territories, including Tamil Nadu, Kerala, Puducherry, Odisha, Dadra and Nagar Haveli and Daman and Diu Andaman and Nicobar Islands in their respective territorial waters of up to 12 nautical miles.

The Lok Sabha on Monday passed the Constitution (Scheduled Tribes) Order (Fourth Amendment) Bill, 2022 to include Betta-Kuruba in the Scheduled Tribes list of Karnataka as a synonym for the already categorised Kadu-Kuruba tribe in the State.

Finance Minister Nirmala Sitharaman on Monday said note in circulation (NiC) has witnessed an annual growth of 7.98% to ₹31.92 lakh crore as of December 2, 2022.

In a reply in the Lok Sabha she said, the demand for currency depends upon several macroeconomic factors, including economic growth and the level of interest rates.

Dutch Prime Minister Mark Rutte apologised Monday on behalf of his government for the Netherlands’ historical role in slavery and the slave trade, despite calls for him to delay the long-awaited statement.

“Today I apologise,” Mr. Rutte said in a 20-minute speech that was greeted with silence by an invited audience at the National Archive.

India is set to offer 2 to 3 million tonnes of wheat to bulk consumers such as flour millers and biscuit makers as part of efforts to cool record-high prices, two government sources said, even as State reserves have dropped to the lowest in six years. Wheat prices have surged in India this year after a sudden rise in temperatures hit crop yields and output.

Legspinner Rehan Ahmed became the youngest men’s Test cricketer to claim a five-wicket haul on his debut and put England on the brink of a historic 3-0 sweep in its first test tour to Pakistan in 17 years. Pakistan’s batters crumbled for 216 in the second innings of the third and final test as the 18-year-old Ahmed grabbed 5-48 and Jack Leach (3-72) claimed all three of his wickets in the space of six deliveries on Day 3 to leave England a modest target of 167 runs.