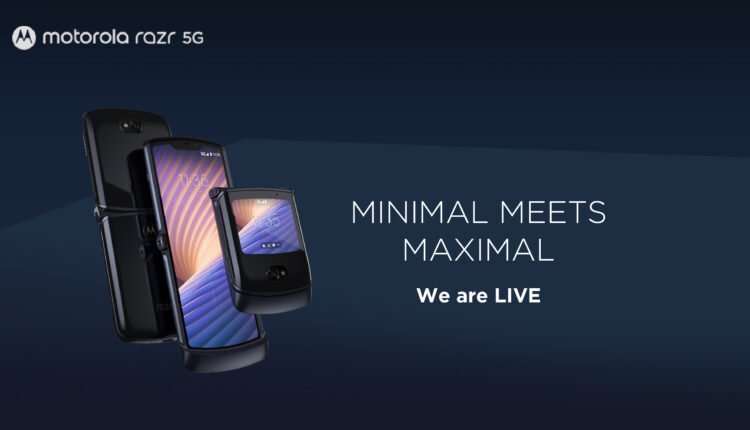 Motorola announced the successor of the Moto Razr. It is named Moto Razr 5G, quite a suitable name if you ask me because though it may be the successor the changes are minor and the phone looks to be Moto Razr ver. 1.5.

The build quality and design have seen some minor changes that are quite significant to the flip phone experience. The hinge and screen have been improved from last year’s model and has been tweaked a bit, which makes for a better one-hand opening experience. However, the screen creases are still there, though it is a much better design than the one big crease of Samsung Galaxy Flip Z. The creaking sounds from the Moto Razr (2019) hinge isn’t present here.

The chin of the Razr phone has some lost weight and the fingerprint sensor is gone too. Don’t worry it is situated on the back of the phone now.

Overall, the phone looks much cleaner and basic than last year.

Motorola has upgraded the SoC (System on Chip) from Snapdragon 710 to Snapdragon 765G. Now some may be asking why Motorola didn’t go for Snapdragon 865. Well, two reasons mainly:

The camera has also been improved this year, with this year’s model sporting a 48MP sensor for the primary camera and 20MP for the selfie camera. However, it still is a single-camera setup and the Wide-Angle/Telephoto lens seems to be missing in action.

The Quick View Display of the Moto Razr has been its signature and for a good reason. Other companies have tried to copy it but have failed. The Quick View has further been improved; Motorola has done a lot of work to make it vastly better when it comes to functionality. The phone can now be used to send replies without opening the phone and use apps that can fit on the screen.

Moto Razr 5G has a neat trick, the phone primary camera can be used to take selfies by using the Quick View Display. So, you will be able to take crisp 48MP selfies!

Get ready to take the most advance selfies on the planet! The 48 MP camera on Motorola #razr5G doubles as a selfie camera when flipped shut, giving you sharp, brilliant selfies in any light! #MinimalMeetsMaximal. Unveiling on 5th Oct, 12 PM on @flipkart! https://t.co/5y4LmN2F4Q pic.twitter.com/FbmqNrlCSM

It also supports 5G, if that wasn’t clear from the name itself.

Motorola will be available at Flipkart and major retail stores for ₹1,24,999, first sale begins on 12th October 12 AM. The phone offers great improvements over the last one and feels closer to becoming the flip-phone that people will finally consider buying. However, the phone will still have some drawbacks like dual camera setup, mediocre battery life, the display crease, and high price makes it a very niche phone. However, the reception of Moto Razr 5G despite its drawback has been pretty good.