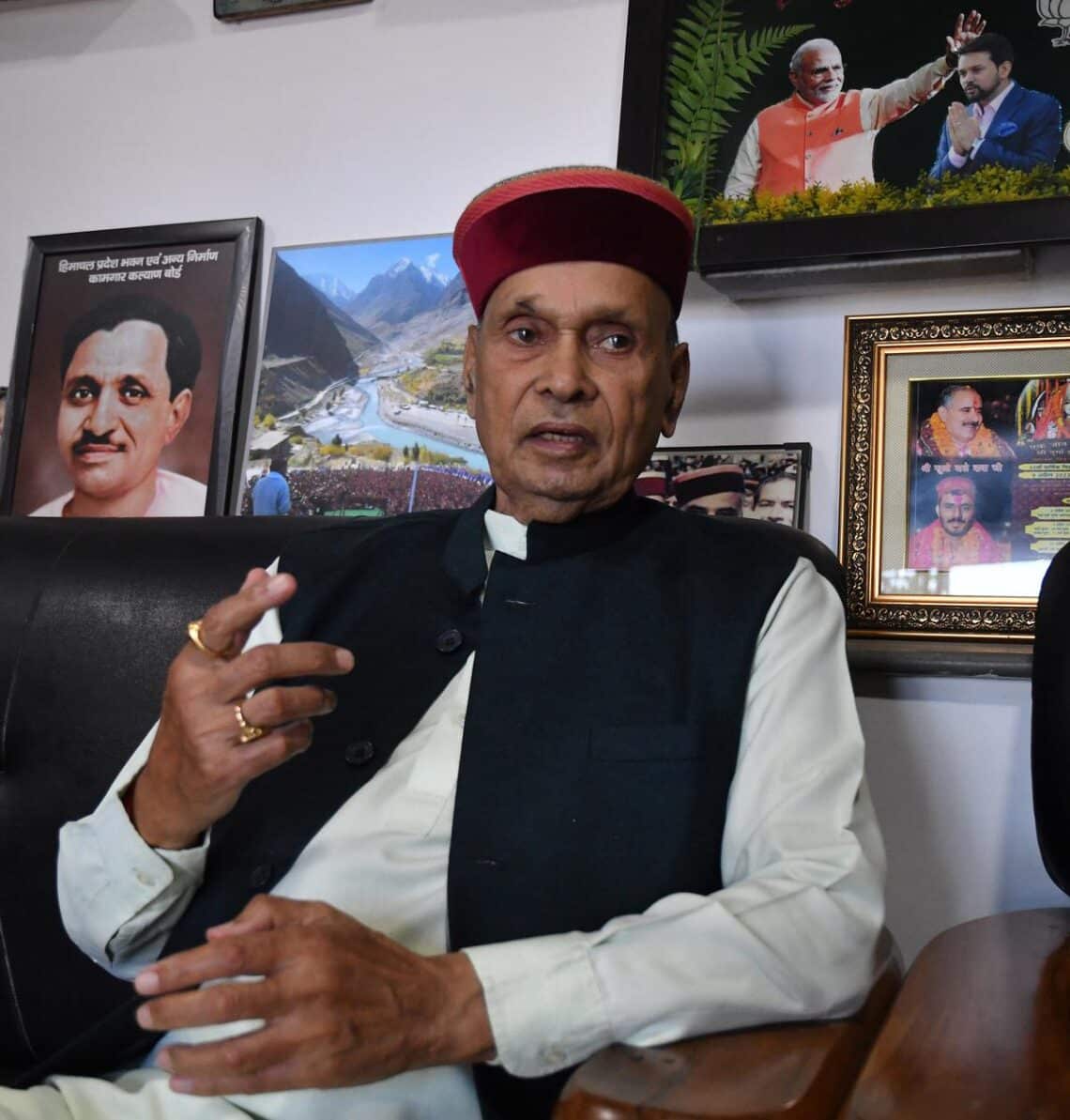 Despite BJP’s loss in last year’s byelections, Prem Kumar Dhumal says the party is optimistic of winning the Assembly polls in Himachal Pradesh

Despite BJP’s loss in last year’s byelections, Prem Kumar Dhumal says the party is optimistic of winning the Assembly polls in Himachal Pradesh

With the Assembly elections in Himachal Pradesh closing in, former Chief Minister and senior Bharatiya Janta Party (BJP) leader Prem Kumar Dhumal has flayed the Congress over the key issue of government employees’ pension, saying the National Pension System (NPS) is a crime committed by the erstwhile Congress government.

Speaking exclusively with The Hindu, at his residence in his native Samirpur in Hamirpur district, Mr. Dhumal expressed confidence that people will repose their faith in the BJP’s pro-development policies.

Though his party lost the byelections in the State last year, the two-time former Chief Minister is optimistic of a BJP win in the upcoming polls. “We discussed the byelection results at length in party meetings and have drawn our conclusions and remedial measures were taken. We have tried to watch the interest of the voter, modified our policies and our functioning, and I hope we will be able to make it. In the last five years, there was a BJP government at the Centre and in the State as well, and the ‘double engine’ government has worked extremely well despite the COVID-19 pandemic, and every citizen has benefited from different government schemes. We expect people to vote for continuity of development and good governance,” he said.

Against the backdrop of government employees demanding the restoration of the Old Pension Scheme (OPS), Mr. Dhumal hit out at the Congress. “In 2004, when the Congress government was in the State, and the Congress-led UPA at the Centre, they introduced the NPS and signed the agreement. It is a crime committed by the Congress government. They have no moral right to give any relief under that. The BJP will consider the issue and I am personally of the opinion that a person who has served the State as an officer or an employee throughout his/her life should get a respectable pension after retirement so that he/she can live respectfully. And definitely, we will solve the problem,” he said.

Commenting on the impact of BJP rebels on the party’s electoral prospects, Mr. Dhumal said, “Whenever the party is expected to return to power, more and more people aspire for the party ticket, and it is the right of every worker. But there’s only one ticket for a seat, and many get disappointed. We are trying to convince them, some of them have withdrawn and some of them may retire in favour of the party’s official candidate. I think ultimately it shows the popularity of the party that scores of people were seeking party tickets.”

On the Opposition parties’ jibe that BJP has been forced to campaign aggressively because it has sensed defeat, Mr. Dhumal said the Congress is scared of BJP’s aggressive campaign. “We have a large number of leaders, we have a lot of star campaigners and, therefore, they are coming to the campaign. The Congress, on the other hand, doesn’t have leaders and hence they are making noise.”

On Congress’s electoral prospects, Mr. Dhumal said the late Virbhadra Singh was a stalwart of the party and in his absence, the Congress is definitely suffering. “They are leaderless. They are trying to find someone or nobody’s there to replace him. Naturally, this is a disadvantage for them.”

Declaring that the Aam Aadmi Party (AAP) doesn’t have any future in the State, Mr. Dhumal said a sizeable number of voters are former and serving soldiers and their families. The way AAP questioned the surgical strikes, air strikes and pointed fingers at the Indian Army, and kept asking for proof, the people of Himachal hate them, he said. “I don’t see any future for AAP in Himachal, because of their corruption in Delhi and Punjab. In Himachal Pradesh, the main contest is between BJP and Congress.”

About his role if BJP returns to power, Mr, Dhumal said, “In every person’s life and in the party’s, there are posts. And after a period of time, they become ‘former’. But there is one post against which ‘former’ is never associated and that is with ‘karyakatra’ (worker). So, I will work as a ‘karyakarta’. After 2017, I decided to not contest elections, but the constituency (Sujanpur) where I contested, I continued to serve the people. Now, that the candidate for the upcoming election has been declared, I am still continuing with party work.”

Expressing his views on ‘dynastic politics’, Mr. Dhumal said, “It should not happen that a person is given a post based only on the criteria that they are someone’s wife, son or daughter. On the other hand, if one is qualified, they should not be denied a post only for the reason that they are someone’s relative. A post should not be given only because one belongs to a ‘dynasty’, but it should also not be denied only because of their ‘dynasty’ if that person is qualified.”