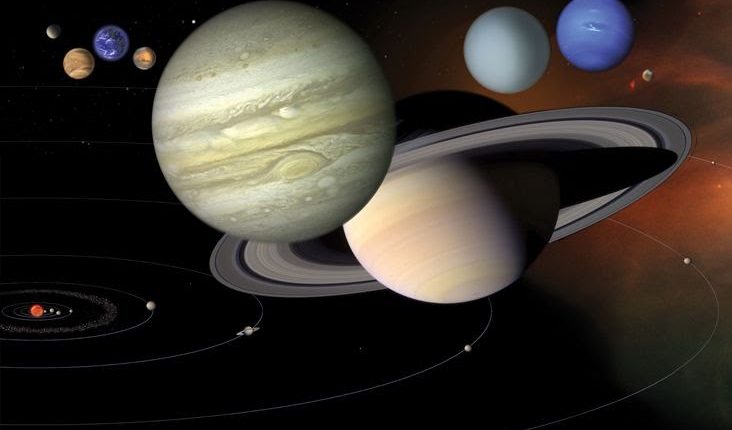 Scientists of Japan Aerospace Exploration Agency (JAXA) created an animation which shows how the Sun, Saturn and Jupiter attracts each other around the center.

Sun is the biggest celestial body in our solar system that gives us heat, light and energy and generates space weather. If we compare the sun with the billions of other stars in the universe then we will see that the sun is unremarkable. But, for the earth and other planets in our solar system, it is a powerful center of attention.

James O’ Donoghue, a planetary scientist at JAXA ( Japan Aerospace Exploration Agency) created the animation which shows that how the Sun, Saturn and Jupiter attract each other around the barycenter due to their gravitational forces.

Did you know planets don't technically orbit the Sun? Instead, everything orbits the Solar System center of mass, even the Sun! While the Sun contains 99.8% of the Solar System's mass Jupiter holds most of the rest (Saturn is 2nd), so the Sun actually orbits Jupiter slightly — pic.twitter.com/npZ8OaIFWB

According to O’ Donoghue, everything orbits the solar system center of mass, even the sun. He further explains that the Sun contains the 99.8% mass of the solar system’s total mass and from the remaining 0.2% Jupiter makes up the most. So, if we apply the laws of gravitational force, then we will find that due to the mass of the Jupiter, it will slightly pull on the Sun in the same manner as sun pull the Jupiter. By this study, we could say that the Sun slightly orbits Jupiter.

Barycenters helps the astronomers to find the hidden planets circling other stars. Every planet and star in our solar system orbits an invisible point that appears to be at the center.

On this, O’ Donoghue said, “The planets do orbits the sun of course,” “We are just being pedantic about the situation.”

There are things that we cannot control- Zlatan Ibrahimovic