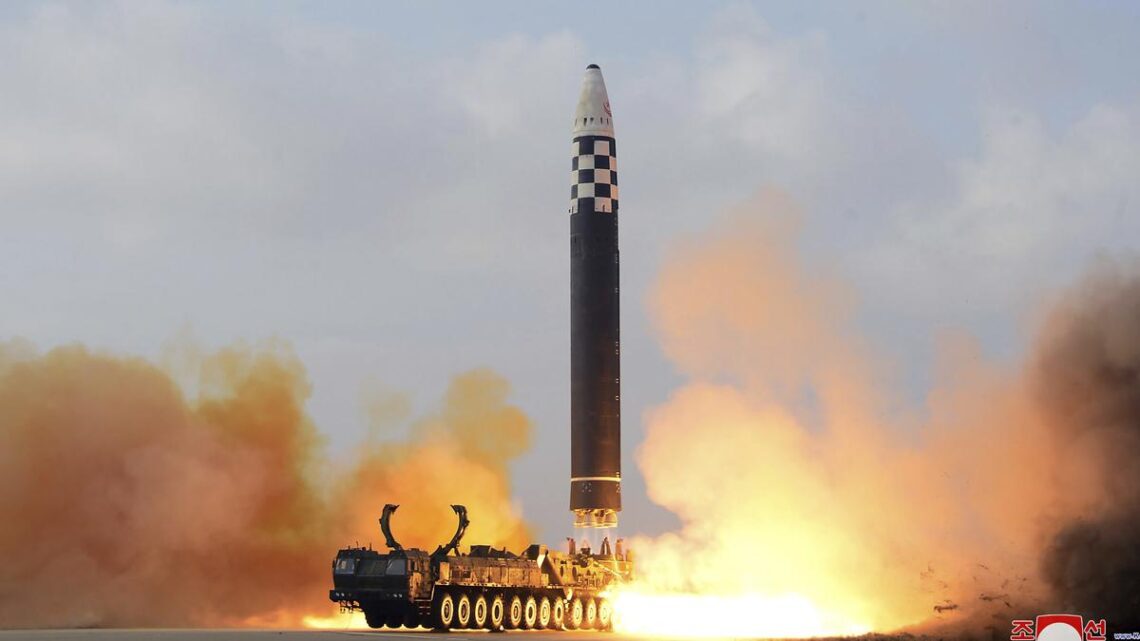 North Korea fired a pair of ballistic missiles on December 18 toward its eastern waters, its first weapons test in a month and coming two days after it claimed to have performed a key test needed to build a more mobile, powerful intercontinental ballistic missile designed to strike the U.S. mainland.

South Korea’s military detected the launch of two North Korean ballistic missiles from its northwest Tongchangri area. The missiles flew across the country toward its eastern waters, South Korea’s Joint Chiefs of Staff said in a statement.

It said the missiles were fired about 50 minutes apart but gave no further details, like precisely what type of weapons North Korea fired and how far they flew. The Joint Chiefs of Staff said South Korea’s military has bolstered its surveillance posture and maintains a readiness in close coordination with the United States.

The Tongchangri area is home to North Korea’s Sohae Satellite Launching Ground, where the country in past years launched satellite-carrying long-range rockets in what the U.N. called a disguised test of ICBM technology.

On Thursday, in the Sohae facility, North Korea also performed what it called the test of a “high-thrust solid-fuel motor” for a new strategic weapon, a development that experts say could allow it to possess a more mobile, harder-to-detect arsenal of intercontinental ballistic missiles that can reach the U.S. mainland.

It wasn’t immediately known if Sunday’s launches occurred from the Sohae facility.

Sunday’s launch is the North’s first public weapons test since the country last month launched its developmental, longest-range liquid-fueled Hwasong-17 ICBM capable of reaching the entire U.S. homeland. Earlier this year, North Korea test-launched a variety of other missiles at a record pace, despite pandemic-related economic hardships and U.S.-led pressures to curb its nuclear program.

North Korea has defended its weapons testing as self-defence measures to cope with the expanded U.S.-South Korea military drills that it views as an invasion rehearsal. But some experts say North Korea likely used its rivals’ military training as an excuse to enlarge its weapons arsenal and increase its leverage in future negotiations with the U.S.

The weapon North Korea said it could build with the recently tested motor likely refers to a solid-fueled ICBM, which is among a list of high-tech weapons systems that leader Kim Jong Un vowed to procure during a major ruling Workers’ Party conference early last year. Other weapons systems Kim promised to manufacture include a multi-warhead missile, underwater-launched nuclear missiles and spy satellites.

The fuel in solid-propellant rockets is already loaded inside, which helps to shorten launch preparation times, increase the weapon’s mobility and make it harder for outsiders to detect what’s happening before liftoff. North Korea already has a growing arsenal of short-range, solid-fueled ballistic missiles targeting key locations in South Korea, including U.S. military bases there.

The exact status of North Korea’s nuclear attack capability remains in secrecy, as all its intercontinental ballistic missile tests in recent years have been carried out at a steep angle to avoid neighboring countries.

Some experts speculate North Korea already has functioning nuclear-tipped missiles that can hit the entire U.S., given the number of years it has spent on its nuclear program. But others say country is still years away from acquiring such weapons, saying it has yet to publicly prove it has a technology to protect warheads from the harsh conditions of atmospheric reentry.

It's time for a negotiated peace in Ukraine, Kissinger says