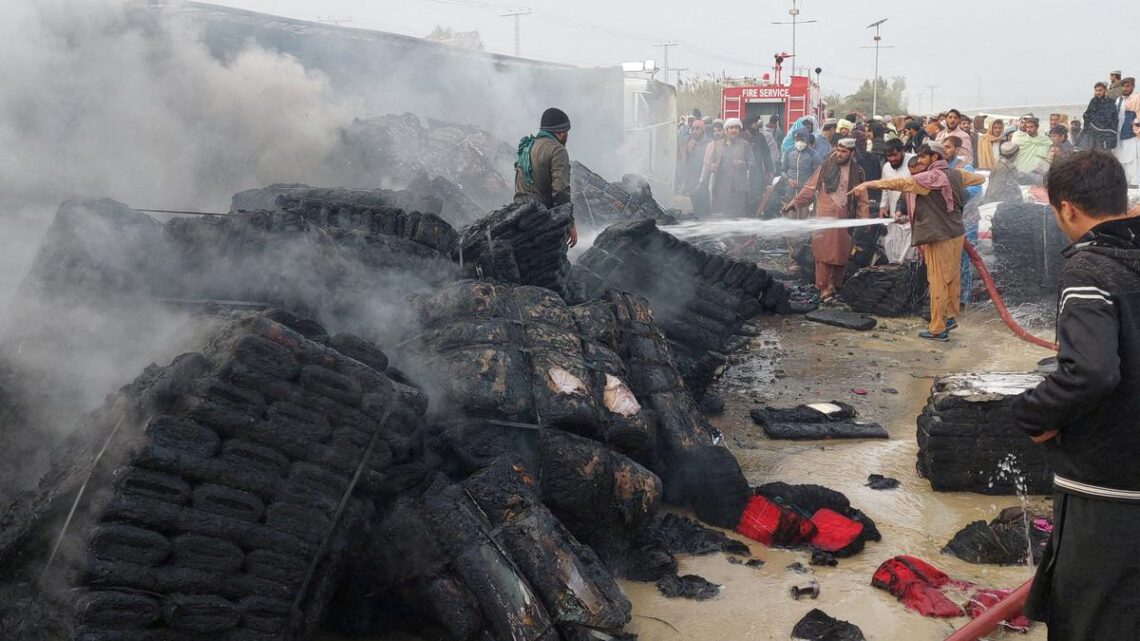 
People douse a cargo supply truck after it was hit during the artillery shelling, in the Pakistan-Afghanistan border town of Chaman on December 11, 2022.
| Photo Credit: Reuters

Pakistan Prime Minister Shehbaz Sharif on December 12 condemned the “unprovoked” firing by Afghan Taliban forces in the border area of Chaman in the restive Balochistan province that killed seven people and said that that the interim government in Kabul must ensure that such incidents were not repeated in the future.

The Pakistani Army’s media wing initially said six died in Sunday’s shelling, but the death toll later rose to seven. Sixteen others were wounded, the army said, blaming the casualties on the “unprovoked and indiscriminate fire” of heavy weapons by Afghan forces on civilians.

The firing in Chaman, the main border crossing for trade between the two countries, follows a series of deadly incidents and attacks that have skyrocketed tensions between Islamabad and Afghanistan’s Taliban rulers.

Condemning the incident, Prime Minister Sharif tweeted that the interim government in Kabul must ensure that such incidents are not repeated in the future.

A senior Pakistan government official said that “it was unprovoked and indiscriminate gunfire which continued for a while and this included artillery shelling by Afghan Border forces.” The Pakistani Army’s media wing described the incident as “uncalled-for aggression” and said Pakistani troops had given a “befitting” but “measured response” and avoided targeting civilians on the other side.

The Foreign Office condemned the incident and have called on their counterparts in Kabul to understand the severity of the situation and take strict action against those responsible for the unprovoked firing and shelling.

“Such unfortunate incidents are not in keeping with the brotherly ties between the two countries,” it said.

“The Afghan authorities have been informed that recurrence of such incidents must be avoided and strictest possible action must be taken against those responsible,” it said in a statement.

The FO said authorities in both countries remained in contact to ensure there was no escalation of the situation.

Chaman remains a busy border trading area for Pakistan and Afghanistan and has also been a flashpoint for clashes between border forces on both sides.

The Chaman border crossing, also known as Friendship Gate connects Balochistan province to Afghanistan’s Kandahar. It was closed last month after an armed Afghan crossed onto Pakistan’s side of the border and opened fire on security troops, killing a soldier and injuring another two.

Islamabad has completed almost 90% of fencing work along the border despite protests from Kabul, who contested the century-old British-era boundary demarcation that splits families on either side.

Successive regimes in Afghanistan, including the U.S.-backed governments in the past have disputed the border and this has historically remained a contentious issue between the two neighbours.