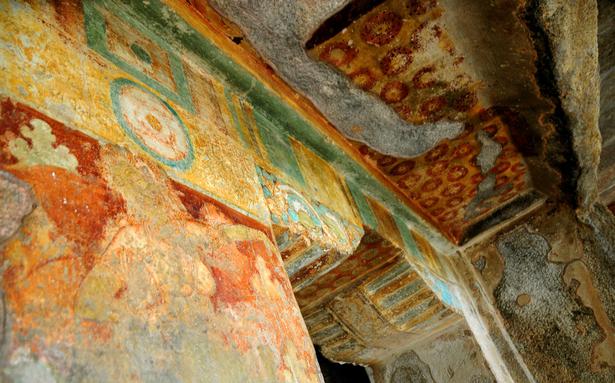 With much of the art in Sittanavasal either damaged or vandalised, Archaeological Survey of India has undertaken conservation measures and also introduced digital checks to track public access

With much of the art in Sittanavasal either damaged or vandalised, Archaeological Survey of India has undertaken conservation measures and also introduced digital checks to track public access

A small village in Pudukottai district of Tamil Nadu was a major centre of Jain influence for 1,000 years just before the Christian era.

Sittanavasal is the name used synonymously for the hamlet and the hillock that houses the Arivar Kovil (temple of Arihats – Jains who conquered their senses), ‘Ezhadipattam’ (a cavern with 17 polished rock beds), megalithic burial sites and the Navachunai tarn (small mountain lake) with a submerged shrine.

This Archaeological Survey of India (ASI)-administered site, popular with youngsters and school excursion groups, is in need of better upkeep.

Sittanavasal is considered by historians to be one of the oldest inhabited areas in the district, and a major centre of Jain influence. “This is the only place in Tamil Nadu where we can see Pandya paintings. At least three-fourths of the art is already damaged, so it is important to protect Sittanavasal for future generations,” R. Kalaikovan, founder of the Tiruchi-based Dr. M. Rajamanikkanar Centre for Historical Research, told The Hindu.

Sittanavasal’s site and art was first mentioned by local historian S. Radhakrishnan Iyer in his 1916 book General History of Pudukottai State. Subsequent research by French archaeologist Gabriel Jouveau-Dubreil along with iconographer T.A. Gopinatha Rao in 1920 further highlighted the importance of the monuments.

The artwork on the ceiling of the sanctum and the ardha mandapam of Arivar Kovil is an early example of post-Ajanta cave paintings of the fourth to sixth centuries, done using the fresco-secco technique (a process that dispenses with preparation of the wall with wet plaster). The ceiling paintings show ‘bhavyas’ (exalted souls who work to achieve moksha or spiritual liberation) enjoying themselves in a pool, full of blooming lotuses; today much of it is obscured by patchy plastering. Faint outlines linger of dancing girls on the ‘ ardha mandapam’ pillars. The pillars of the verandah (added by the Maharaja of Pudukottai at the instance of then Diwan Alexander Tottenham in the 1900s), were brought from Kudumiyanmalai. The colours are a mixture of plant dyes and mineral elements such as lime, lamp black, and clay pigments such as ochre for yellow and terre verte for the greyish-green tints.

Unrestricted public access and general exposure to the elements have led to a gradual fading away of these paintings. At the Ezhadipattam, inscriptions on the beds have been vandalised beyond recognition. T. Arun Raj, Director, ASI, Tiruchi Circle, told The Hindu that periodic maintenance in the form of conservation (for structural repairs) and chemical preservation (for the restoration of paintings) of the monument is being undertaken.

The State government tourist centre has a children’s playground, boat house and a Tamil heritage garden. But its glory days are long gone. Restrooms are boarded up. Small heaps of litter can be seen throughout the compound. Groups of monkeys run free amid visitors, looking for scraps of food. To stem the damage, the ASI has put in digital checks by introducing electronic ticketing to Arivar Kovil and Ezhadipattam, that helps track visitor numbers. “The average footfall to the monuments is approximately around 200-300 per day. We are planning to increase the number of security guards besides installing closed circuit TV cameras soon,” said Mr. Arun Raj. “Programmes are being held to create awareness about Sittanavasal among young people.”

Even though Sittanavasal is a comparatively small archaeological microcosm of Jainism in contrast to those found in Madurai and the Arcot districts, it is thought to be the best preserved example of a Jain cave temple in Tamil Nadu.

Dr. Kalaikovan, who has researched the complex extensively, said continuous records of Jainism in the region exist from the first to 10th centuries. “Of the 20 cave temples in Pudukottai district, 19 belong to Saivite and Vaishnavite streams of Hinduism; Sittanavasal is the only Jain temple with sculptures,” he said.

“There is a debate about whether Jainism’s prevalence in Tamil Nadu began in the first or the third century. Nevertheless, Sittanavasal remains an important place to study the history of the religion. We have inscriptions in Brahmi and ‘ vattaezhuthu’, from the third century AD here, which have been discovered and recorded. Early Tamil inscriptions from the ninth century AD of the Jain monk Ilan-Gautaman, are inside the complex,” said Dr. Kalaikovan.

Dr. Kalaikovan also pointed to the design elements in the Arivar Kovil that hint at its possible earlier existence as a Saivite shrine. “The Aavudayar (pedestal) resembles the round base seen in Siva temples and seems to have been shaved off before the sanctum was converted into a Jain monument. Similarly, the lotus medallion on the roof is like that found in Saivite rock-cut temples. The practice of converting Hindu shrines to those of other faiths was common in this area,” he said.

“Though there are many examples of Jain sites in Pudukottai district, Sittanavasal is more precious because its paintings will be gone in another 50 years. Perhaps recreating them outside in separate pavilions and limiting the shrines for research visits would be a better way to preserve them,” said S. Swaminathan, a Chennai-based history enthusiast and former IIT professor, who has written a book on important heritage spots in Pudukottai.

In a 2003 project report, Mr. Swaminathan suggested improvements such as the building of a centre to study Jainism’s influence in the region, besides improving visitor facilities. “But neither the government nor corporate companies were interested in taking it up, so I have just put it aside,” he said.