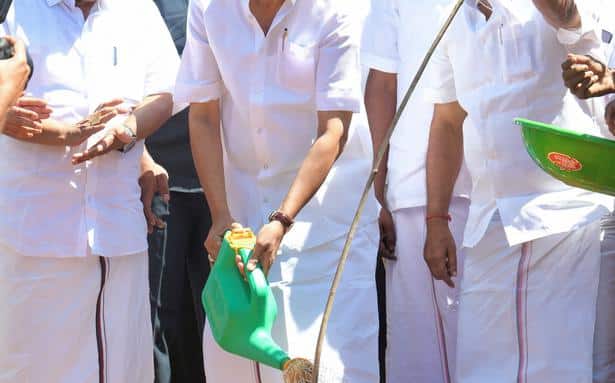 The Chief Minister, who launched the Green Tamil Nadu Mission at Vandalur, said the government alone could not save nature. “People should join the initiative because nature is not just the property of a government. It is the property of the future generation,” he said.

Mr. Stalin made a strong case for protecting biodiversity, saying the world did not belong to humans alone but also to all species, including plants and animals. Pointing out that climate change had become a major threat that had resulted in heavy sunlight and uneven monsoon, the Chief Minister said the situation had come to such a pass that it was difficult to differentiate monsoon from sunny days. “We are not able to predict the arrival of rain. Many parts of the world witness heatwave that could burn human skin. There are the consequences of climate change,” he said.

Mr. Stalin said it was imperative to save forests, restore the green cover and protect waterbodies. “We should desilt waterbodies and keep them clean. We have to ensure that the air is not polluted, and soil wealth is not depleted,” he further said.

Recalling that ‘Manjal Pai’ is an alternative to plastic bags, he said trees had an important role in sustaining livelihood, agriculture and food security. “The Mission should pay attention to planting of trees and protection of forests,” he said.

Mr. Stalin said the Japan Bank for International Cooperation had sanctioned ₹920.58 crore and the amount would be utilised for environment conservation and the green mission. Similarly, NABARD had released ₹481.14 crore and the government would utilise the amount to improve the forest areas of poor and low quality.

To drive home the point that trees alone could help humans face the challenges of climate change, the Chief Minister explained how the mangrove forests in Pitchavaram and Muthupet mitigated the damage caused by Cyclone Gaja.

“We have to plant more trees. Let us grow a plant even if there is an inch of space,” he said, citing the saying of Red Indians, “When the Last Tree Is Cut Down, the Last Fish Eaten, and the Last Stream Poisoned, You Will Realize That You Cannot Eat Money.”