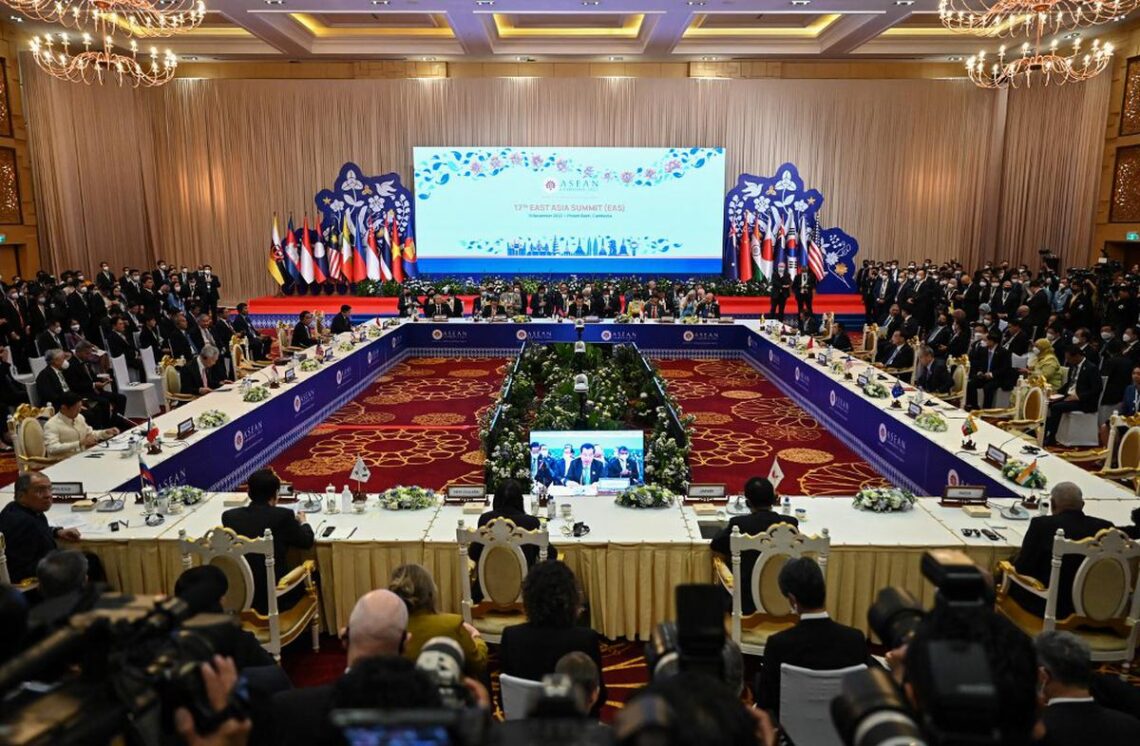 Cambodian leader Hun Sen called for unity on November 13, 2022, telling a gathering including Russia, China and the United States that current global tensions have been taking a toll on everyone.

The Prime Minister, whose country holds the rotating chair of the Association of Southeast Asian Nations, said at the opening of the East Asia Summit that it was in the world’s common interest to cooperate to solve differences peacefully.

The comments come as regional tensions remain high between the United States and China over Taiwan and Beijing’s growing regional aspirations, and while the Russia invasion of Ukraine has disrupted global supply chains, causing rising energy and food prices far beyond Europe.

Without singling out any nation by name, Hun Sen said he hoped leaders would embrace a “spirit of togetherness in upholding open and inclusive multilateralism, pragmatism and mutual respect in addressing the existential and strategic challenges we all face.”

“Many current challenges and tensions have been hindering our past hard-earned efforts to promote sustainable development and causing greater hardship to people’s lives,” he said as he opened the meeting, which is running in parallel to the ASEAN group’s main summit.

Russian Foreign Minister Sergey Lavrov was also taking part in the meetings, which also included the leaders of Australia, New Zealand, South Korea, Japan and others.

On Saturday, Mr. Biden promised that the U.S. would work with ASEAN, telling leaders of the strategically vital coalition that “we’re going to build a better future that we all want to see” in the region where US rival China is also working to expand its influence.

He promised to collaborate to build a region that is “free and open, stable and prosperous, resilient and secure.” “I look forward to continuing our work together with ASEAN and with each one of you to deepen peace and prosperity throughout the region to resolve challenges from the South China Sea to Myanmar and to find innovative solutions to shared challenges,” Biden said, citing climate and health security among areas of collaboration.

Li Keqiang, meantime, told a meeting of ASEAN, China, Japan and South Korea that amid a “turbulent” global security situation, “unilateralism and protectionism are surging, economic and financial risks are rising, and global development is confronted with unprecedented challenges.”

As major economies in East Asia, Li said the group needed to “stay committed to promoting peace, stability, development and prosperity in the region and beyond, and to improving the people’s wellbeing.”

Vice President Jagdeep Dhankhar on November 13, 2022 addressed the East Asia Summit on the last day of his visit to Cambodia.

An official in the Ministry of External Affairs said that the Vice President’s address was a closed session.

Mr. Dhankhar is in Cambodia for his three-day visit. This year marks the 30th anniversary of ASEAN-India relations and is being celebrated as the ASEAN-India Friendship Year.

The Association of Southeast Asian Nations (ASEAN) is an international organisation that has 10 member countries in Southeast Asia: Brunei, Cambodia, Indonesia, Laos, Malaysia, Myanmar, the Philippines, Singapore, Thailand, and Vietnam.

Apart from the ASEAN member states, the East Asia Summit includes India, China, Japan, the Republic of Korea, Australia, New Zealand, the US and Russia.

Mr. Dhankhar announced an additional contribution of $5 million to the ASEAN-India science and technology fund to enhance cooperation in sectors of public health, renewable energy and smart agriculture.

In a joint statement, ASEAN-India acknowledged the deep civilisational linkages, maritime connectivity, and cross-cultural exchanges between Southeast Asia and India which have grown stronger over the last 30 years, providing a strong foundation for ASEAN-India relations.

India and ASEAN nations also declared to enhance cooperation in the digital economy through a series of regional capacity-building activities in digital transformation, digital trade, digital skills and innovation, as well as Hackathons.

Anyone casting evil eye on India is given befitting reply: Rajnath Singh