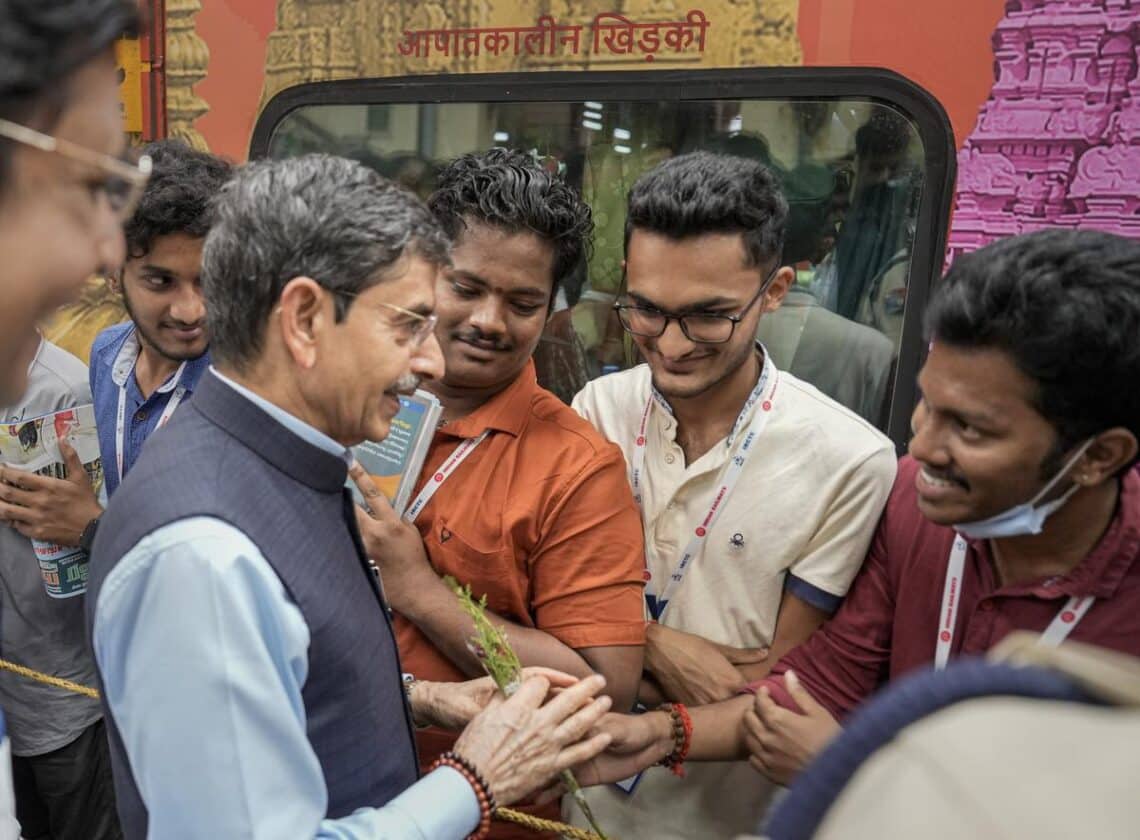 
Tamil Nadu Governor R. N. Ravi interacts with delegates before flagging off a train carrying them to the ‘Kashi Tamil Sangamam’, at the Egmore railway station in Chennai on November 17, 2022.
| Photo Credit: PTI

Tamil Nadu Governor R.N. Ravi said that the western notions of a State and sovereign ruler fail to comprehend Bharat as a rallying point for the freedom struggle and as a process of civilisational evolution, shaped by a shared cultural spirituality.

According to a note that he authored on the eve of the inaugural of the Kasi Tamil Sangamam, Tamilagam was credited with having played a crucial role in the journey of Bharat. He stressed the connection between Kasi and Rameswaram. Kasi had a deep influence on Tamilagam, which is explained by the number of Kasi Viswanatha temples. Tamilagam, in fact, is the physical manifestation of Bharat and several thousands of people travelled between Kasi and Rameswaram until the British broke the centuries-old infrastructure that connected the two. He cited the letter that Sarfoji Maharaj, the last ruler of Tanjore, wrote to the British in 1801 requesting them not to break the chain of Dharmashalas between Kasi and Rameswaram.

The Governor mentioned several figures such as saint Mahapurush Sankardev of Kamrup and Swamy Kumaragurupara Desikar of Dharmapuram Adheenam in relation to their connections with Kasi. He referenced the revolutionary poet, Subramaniya Bharathi, an ardent follower of Bharat Mata, who came to Kasi to study and that he was so influenced by Kasi’s intellectual and spiritual atmosphere that he wrote a poem as tribute. His grand-nephew and family live in Kasi today, which is home to many Tamil families.

He said that Kasi and Kancheepuram are connected as places of astronomical study and research. Many Britishers had conducted their studies from them. The two are also famous for their special weaves — Kanjeevaram and Banarasi sarees are popular across the world. He said there was evidence that Kasi and Kanchi were connected through an umbilical relationship, the history of which is waiting to be rediscovered.

The Governor said that under the leadership of Prime Minister Narendra Modi, the emotional bonds, which have existed in the hearts and minds of people, between the two places are being rejuvenated. The Prime Minister’s love for Tamil and the establishment of the Subramania Bharati Chair in the Banaras Hindu University are a testament to this. Additionally, his patronage towards the Kasi-Tamil Sangamam, which celebrates the age-old connection between the two further evidence his deep commitment to ‘Ek Bharat-Shreshtha Bharat’.

With no consensus yet, COP27 extended by a day