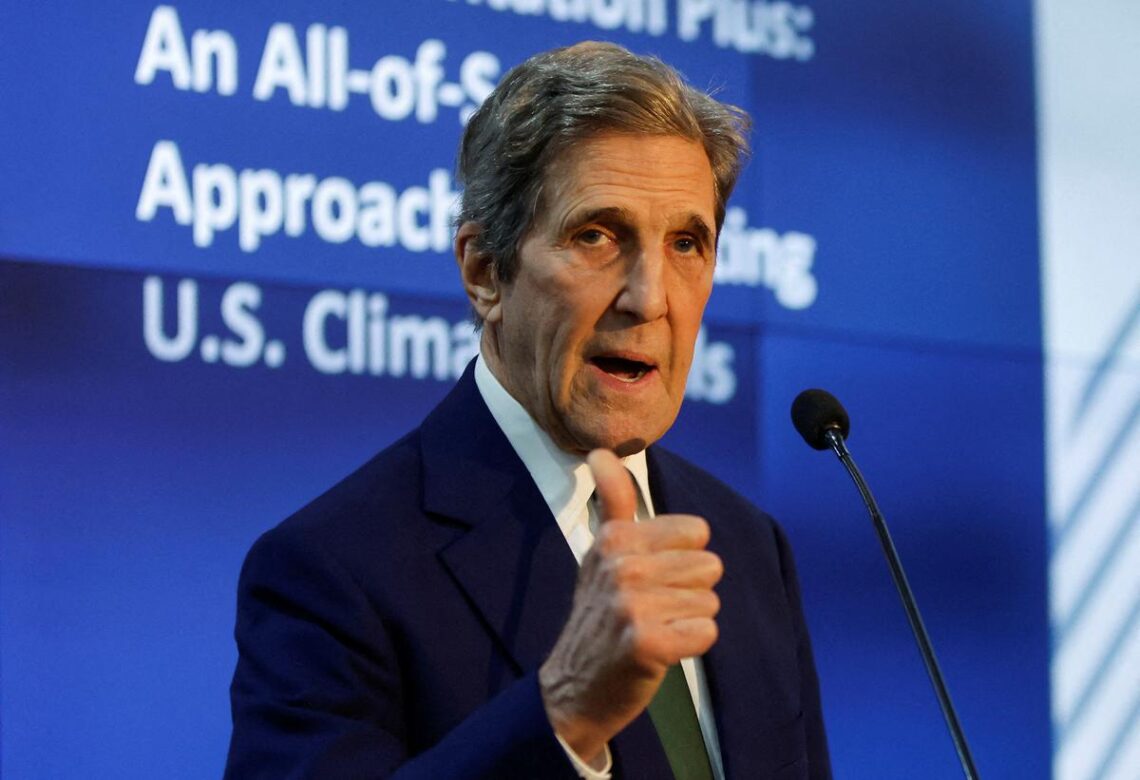 
U.S. Climate Envoy John Kerry has tested positive for COVID-19 at the U.N. climate talks in Egypt, a spokeswoman said late Friday night, the latest setback for what appeared to be stalled negotiations that were already going into overtime.

“He is fully vaccinated and boosted and experiencing mild symptoms. He is working with his negotiations team and foreign counterparts by phone to ensure a successful outcome of COP27,” spokeswoman Whitney Smith wrote in a statement late Friday.

Kerry’s illness was sure to add to worries about the negotiations, which were scheduled to end Friday but were continuing with no clear end in sight. A former U.S. senator and secretary of state, Kerry has deep relationships with leaders around the world and carries a lot of weight in international talks.

Negotiations, at least those in public, hit a lull Friday afternoon into the evening, as press conferences and plenaries were postponed or cancelled. Diplomats said they hoped for late night progress as they changed airline reservations for talks going into extended overtime in Egypt.

Delegates said there was some headway being made, especially on the most difficult sticking point. That’s the issue of ‘loss and damage,’ which is the idea of some kind of compensation — a dedicated fund or something less formal — from rich nations to help out poor nations already hit hard by extreme climate events worsened by decades of burning of fossil fuels by developed nations.

“I think we’re in for a bit of a long haul,” World Resources Institute international climate director David Waskow said. “Loss and damage sits at the center in terms of what needs to be done to get this over the finish line.”

After being a tad isolated in not favoring a dedicated loss and damage fund, there is talk of the United States working on yet another proposal with the European Union, which produced a surprise offer Thursday, Waskow said. He also noted that one issue is the surprising unity of poorer nations, often called G-77 and China, on the issue, insisting on a fund being established at this summit.

“We are very busy and they’re making some progress and they’ve gotten some clarity on all positions,” Molwyn Joseph, who spoke on behalf of small island states, told The Associated Press.

“There is the possibility that we could get an outcome, but also it could fall over at the last minute,” said New Zealand’s Climate Change Minister James Shaw. “And I think if that happened, it would be a real shame because this is as close (on loss and damage) as we’ve ever been before.”

Nakeeyat Dramani Sam of Ghana chided delegates at this year’s U.N. climate talks, saying they would act faster to rein in global warming if they were her age.

“It is an emergency,” she told negotiators, holding a sign that read “Payment Overdue”. “If all of you were to be young people like me, wouldn’t you have already agreed to do what is needed to save our planet?”

But after her standing ovation, it was back to nations squabbling over several thorny issues, with the Egyptian presidency acknowledging that the talks will go into overtime on Saturday, if not longer.

“Time is not on our side,” said Egyptian Foreign Minister Sameh Shoukry. Speaking as the summit’s chair, he pledged to try to find common ground on key issues Friday and Saturday. “The global community is looking to us to be bold and ambitious.”

The biggest fight is over what the 10-year-old activist and author alluded to. Nations are split over a few competing options on loss and damage. Pakistan’s climate minister, Sherry Rehman, told her fellow negotiators that two of the proposed options that don’t immediately provide a fund “are not tenable” for the 77 poorest nations and China.

A new draft cover decision from the Egyptian presidency came out Friday morning, half the size of Thursday’s 20-page document that was criticised for being vague and bloated. But this new 10-page one still has little new compared to previous years and plenty of places with yet-to-be-decided options. And some of the most talked about proposals, from the European Union, Barbados and India aren’t in it, reflecting the Egyptian presidency’s priorities.

The EU made a surprise proposal late Thursday that called for the creation of a fund for “loss and damage” payments to the most vulnerable nations, an idea long resisted by some rich countries in Europe and the United States. But it would also require emerging economies such as China, the second biggest polluter after the U.S., to contribute and ties any deal to tougher emissions cuts.

“We’re making clear that Europe is on the side of the most vulnerable states,” German Foreign Minister Annalena Baerbock said. “Others can now show which side they are on.”

The EU proposal would also require stepped up efforts on “mitigation,” the term used for work to slow global warming, like drastically reducing emissions of greenhouse gases. It also adopts a call to phase down all fossil fuels — a measure first proposed by India and a dramatic step up from previous commitments to just phase down coal.

Unless emissions are reduced more steeply, “no money in the world could pay for the damages and losses of the future,” Baerbock said.

EU climate chief Frans Timmermans said Friday that the bloc’s proposal on funding for loss and damage and mitigation is “a final offer” that seeks to “find a compromise” between countries as negotiators work out a way forward at the United Nations climate talks in Egypt.

The environmental advocacy group Action Aid called the proposal a “wolf in sheep’s clothing” because it doesn’t go far enough.

The EU plan is a counter to a proposal made by the Group of 77 and China, which would create a fund but only require developed nations to contribute, excepting top polluters China and India.

China, which had been quiet during much of the talks, and Saudi Arabia both said the money for a loss and damage fund shouldn’t come from them. Developed countries should foot the bill, China said. Both also insisted that the 2015 Paris Agreement that aims to limit global warming to an ambitious 1.5 Celsius (2.7 Fahrenheit) increase should not be altered, which can be interpreted as not strengthening efforts.

As for the United States, there was “a deafening silence” after the EU revealed their proposal, said Preety Bhandari, senior adviser on climate finance at the World Resources Institute. “So I assume overnight and during the course of the day there will be a lot of diplomatic outreach across various parties to finally help us land the decision on funding for loss and damage here at COP27.”

The EU plan is far from the only proposal.

Former Irish President Mary Robinson, chair of The Elders, a group of retired leaders, praised the three options on loss and damage that German climate envoy Jennifer Morgan and Chilean Environment Minister Maisa Rojas have been hammering out, saying “it puts us on the cusp of a historic breakthrough. We’ve gone from not even having loss and damage finance on the agenda at COP27 to having a fund, a mechanism, and a flow of finance all within our grasp.”

Friday’s draft from the Egyptian presidency includes some vague references to reform to multilateral development banks but did not include or make reference to the detailed Bridgetown Initiative on financial reform from Barbados and its Prime Minister Mia Mottley.

Also missing is a controversial proposal by India to change the Glasgow pact language that calls for a phase down of coal to a phase down of all fossil fuels, including oil and natural gas. Egypt has dramatically ramped up natural gas production from newly discovered fields in recent years and is a close ally of fossil-fuel powers Saudi Arabia and the United Arab Emirates.

The idea behind expanding the language to all fossil fuels is that a coal-only phase down hurts mostly developing nations, while this attacks the problem of emissions more directly and across the board, according to longtime negotiations analyst Alden Meyer of the think tank E3G.