The View from India | In Iran, the regime escalates

by TSA Desk
in World News
Reading Time: 8 mins read
A A 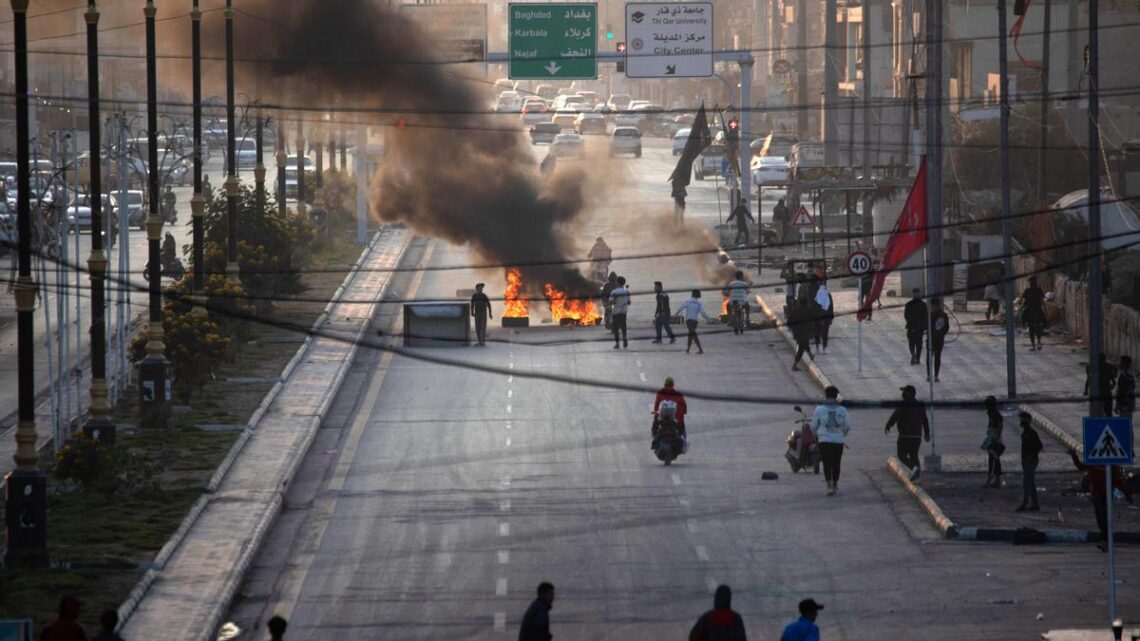 
Iraqi demonstrators block a road with burning tyres as they protest the death of fellow protestors in clashes with security forces, in the southern city of Nasiriyah, on December 11, 2022.
| Photo Credit: AFP

(This article forms a part of the View From India newsletter curated by The Hindu’s foreign affairs experts. To get the newsletter in your inbox every Monday, subscribe here.)

The regime is under both domestic and international pressure. At home, protests across the country demanding change, triggered by the death of Mahsa Amini, a 22-year-old Kurdish-Iranian woman, while in custody of the infamous morality police, have posed the greatest internal challenge to Iran’s ruling clergy since the 1979 revolution. Abroad, the regime’s crackdown has triggered widespread criticism and sanctions. But the Ayatollahs do not seem to be ready to back off. Over the past week, Iran carried out two public executions of protesters: On December 8, Mohsen Shekari, a 23-year-old protester who was accused of attacking a member of the Basij militia with a machete, was hanged; on December 12, a second person, 23-year-old Majidreza Rahnavard, was hanged from a crane in the holy city of Mashshad for allegedly killing two paramilitary officials.

Critics and human rights activists say the executions were carried out after phoney trials that lacked the due process. Iran has reportedly sentenced at least 11 protesters to death in closed-door hearings. Over 300 protesters have been killed in crackdown since the protests began in September and more than 18,200 people have been detained. Last week, Iran’s Attorney-General Mohammad Jafar Montazeri had said authorities had abolished the morality police, in what was seen by many as a major concession to the protesters. But no official announcement from the government followed. And the executions suggest that the regime prefers escalation rather than concessions. But this also leaves the regime in uncertainty. “The sustainability of any system is dependent on its ability to reform from within,” writes  The Hindu in this editorial. “Iran’s post-revolutionary order has resisted the calls for reforms till now. But as the revolution ages and the calls for change get stronger, the Ayatollahs face their greatest dilemma — tighten their grip further, risking more blowback, or start gradual political and social reforms.” Passengers in protective gear are directed to a flight at a Capital airport terminal in Beijing.
| Photo Credit:
AP

For months, China’s leaders and its official media defended the country’s zero-Covid policy. Then came unprecedented protests that seemed to have forced the hands of the Communist Party to shift away from the unpopular policy. Authorities have phased out the mandatory mass testing regime, a key component of the zero-Covid policy that called for testing, tracing of all cases and close contacts, and quarantining in central facilities until cases in a region are brought back down to zero. The government has also decided to discontinue one of the key elements of its zero-Covid infrastructure: a mandatory “travel card” app that tracked every person’s movement based on their mobile phones and listed their recent locations. But this policy shift is not without risks. The easing of restrictions has left many hospitals unprepared to deal with the current surge of cases in many Chinese cities. Fever clinics in the Chinese capital and around the country are reporting long lines, Ananth Krishnan reports from Beijing. Saudi Arabia offered a warm welcome on December 7 to Chinese President Xi Jinping, who was on his second major foreign visit after the start of his third term in October. On December 9, Mr. Xi met several Gulf Arab leaders in Riyadh. During the summits, the Chinese leader signed energy agreements worth billions, reiterated Beijing’s support for the creation of a Palestine state based on the 1967 border and welcomed a new era in the Arab-China relations. China has expanded its outreach to West Asia, particularly to the Gulf region, in recent years. Saudi Arabia and the UAE have boosted energy ties with China. Mr. Xi’s visit came at a time when the Sunni Gulf Kingdoms defied pressure from the U.S., their traditional security and strategic ally, to pump up oil production. Instead, Saudi Arabia, the de facto leader of OPEC, joined hands with Russia, its OPEC Plus ally, and cut output maintaining pressure on prices, much to the displeasure of the U.S. As the U.S.-China competition and the U.S.-Russia rivalry heat up, America’s allies in the Gulf seem to be exploring options to diversify their economic and strategic partnerships. Afghanistan: Curbing terrorism and terrorist financing in Afghanistan, and the use of trade and connectivity routes via Iran are key to regional security said India’s National Security Adviser Ajit Doval at the India-Central Asia meeting of NSAs and Secretaries of Security Councils in Delhi on December 6. In January, Prime Minister Narendra Modi had hosted leaders of Kazakhstan, Kyrgyzstan, Tajikistan, Turkmenistan and Uzbekistan, and agreed to have security chiefs meet on a regular basis to discuss India’s “extended neighbourhood”. The [Security Advisors] discussed the current situation in Afghanistan and its impact on the security and stability of the region, reiterating strong support for a peaceful, stable and secure Afghanistan, emphasising respect for its sovereignty, unity and territorial integrity and urging non-interference in its internal affairs,” said a joint communique.

Sri Lanka: In the two years since he was first elected to Parliament, Sri Lankan legislator Shanakiyan Rasamanickam has won many fans within Sri Lanka, including from the Sinhalese majority. But his recent speech in Parliament, threatening to launch a “China go home” campaign, similar to the “Gota go home” people’s movement that dislodged the former President, made more heads turn, Meera Srinivasan reports from Colombo for  The Hindu Profiles.

1. The role of the ‘China Test’ in India’s grand strategy

It is a rather straightforward one — smart balancing China in Southern Asia and beyond must form a key element in India’s grand strategic planning and decision making, writes Happymon Jacob.

2. The G-20 can be the UN Security Council alternative

The legitimisation of the G-20 as a global arbiter in international affairs will create a multilateral instrument where all members are equal, writes T.P. Sreenivasan.

3. In Pakistan, a new army chief and old issues

What is being projected as the legacy of the outgoing army chief Gen. Bajwa is likely to be the primary challenge for the incoming Lt. Gen. Asim Munir, writes D. Suba Chandran.

Despite scant international support, Ahmad Massoud’s anti-Taliban grouping hopes to reach out to the younger generation that grew up during the 20 non-Taliban years, writes Suhasini Haidar in The Hindu Profiles.

5. What does a price cap for Russian oil mean?

Why did the Group of Seven nations feel this step was necessary? How has Russia reacted to the move? Where does India stand on imports of Russian oil? explains K. Bharat Kumar in The Hindu FAQ.